The Chinese ban on cryptocurrency trading, the possibility of a similar ruling in South Korea and the fear of regulations around the globe were some of the reasons that started the current decline.

However, with the election of Yi Gang as the head of People’s Bank of China (PBoC), the country’s central bank, some market experts believe that the Chinese ban on cryptocurrency trading might be overturned.

This has not deterred the Mayor of Seoul to announce the creation of ‘S coin’, the cryptocurrency of the city. He also wants to encourage the development of Blockchain projects as he foresees the widespread use of the technology in the city.

Let’s see if we find any buy setups on any of the digital currencies we track?

Bitcoin broke below the $7,000 mark on April 01, but the dip was purchased aggressively by the bulls. As a result, the price has been back above the $7,000 level once again. The 20-day EMA is the important resistance to watch out for during any pullback, which is just above $8,200 levels. The bears will strongly defend this level, while the bulls will attempt to break out of it.

We should wait for the BTC/USD pair to sustain above the 20-day EMA before recommending any long positions.

The trend remains down, hence, we don’t find any buy setups on the digital currency.

The bulls are struggling to defend the $355 to $385 support zone on Ethereum. Even at such critical supports, there is lack of buying, which shows weakness. Any pullback on the ETH/USD pair will face selling at the downtrend line and above that at the 20-day EMA.

We have been anticipating a sharp pullback because the RSI is deeply oversold, but it has not yet materialized. We’ll become positive in the short-term once the virtual currency closes above the downtrend line.

Bitcoin Cash continues to be under pressure. Currently, it is attempting to pullback from the April 01 lows of $653, but the buying remains tepid. 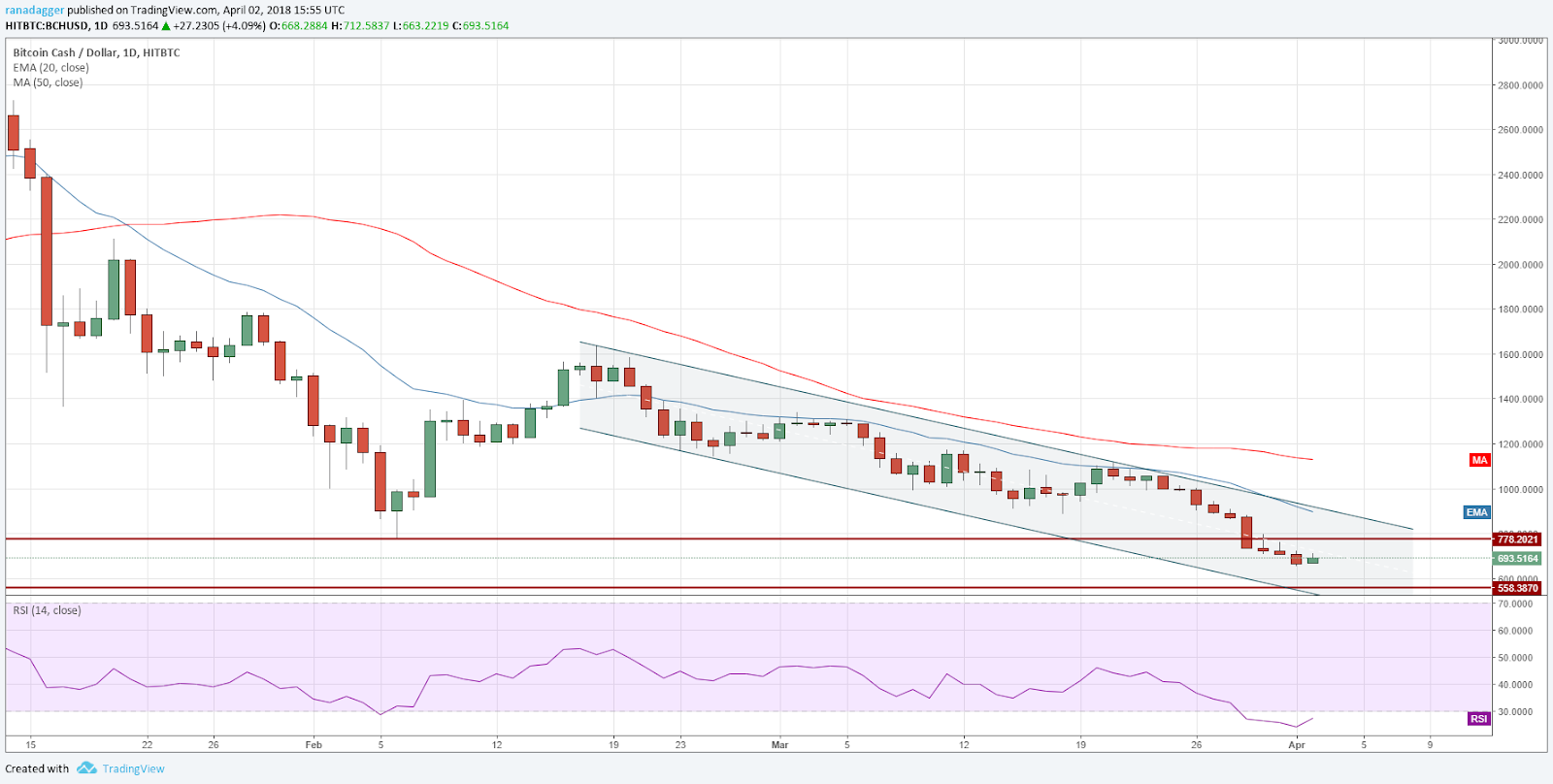 We’ll have to change our bearish view only after the virtual currency breaks above the 20-day EMA and the resistance line of the descending channel. We expect a pullback because the RSI is oversold, but we don’t find any buy setups to trade it. Hence, we are not suggesting any long positions.

Ripple is trading weak for the past four days. It has extended its fall after breaking below the critical support of $0.56270. The next major support is way lower at $0.22, however, as the RSI is oversold, we expect it to pull back soon. If the XRP/USD pair manages to scale above the $0.57 level, it will indicate that the markets have rejected the lower levels. Until then, all small pullbacks will be sold.

Hence, we shall wait for the bulls to sustain above $0.57 before suggesting any long positions.

Stellar is attempting to bounce off the downtrend line. The positive divergence on the RSI is a bullish sign. 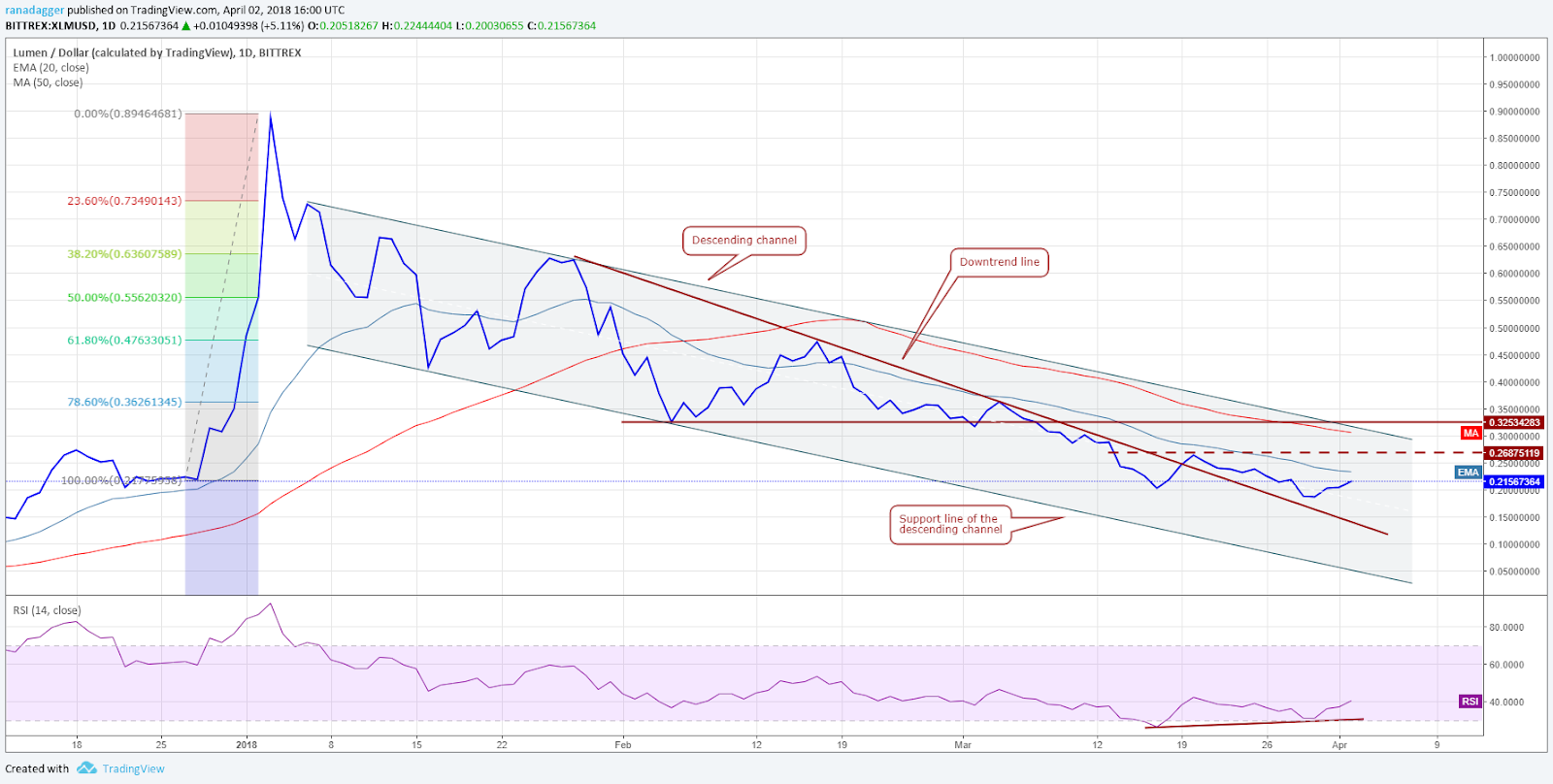 The current pullback will face resistance at the 20-day EMA and above that at $0.27 levels. If the bulls fail to break out of these two levels, the XLM/USD pair can slide to $0.16 and then to $0.11 levels.

We’ll attempt long positions once the price sustains above $0.27.

Litecoin has been trading in a tight range for the past three days. The bears have not been able to break below the critical February 02 support of $107.102. However, as the RSI is in the oversold territory, we might get a pullback, which will face resistance at the 20-day EMA and the downtrend line.

Our goal is to wait for a buy setup to form before attempting a trade on the LTC/USD pair. The longer the ADA/BTC pair remains in the range, stronger the breakout will be, when it happens.

Hence, we retain the recommendation provided in our previous analysis to buy on a close (UTC) above 0.00002460 levels. The pattern target of this break is 0.0000323, which can easily be exceeded on the upside. The initial stop loss can be kept at 0.00001800, which can be raised later. The RSI has again entered the oversold zone, hence, a pullback to the 20-day EMA is possible.

The NEO/USD pair will attract buyers once it sustains above $65 levels. Until then, every recovery will be sold into.

The digital currency needs to show sustained buying before we suggest any trade on it.

For the past three days, EOS has been trading between $5.1 and $6.2. The 20-day EMA has been acting as a stiff resistance. 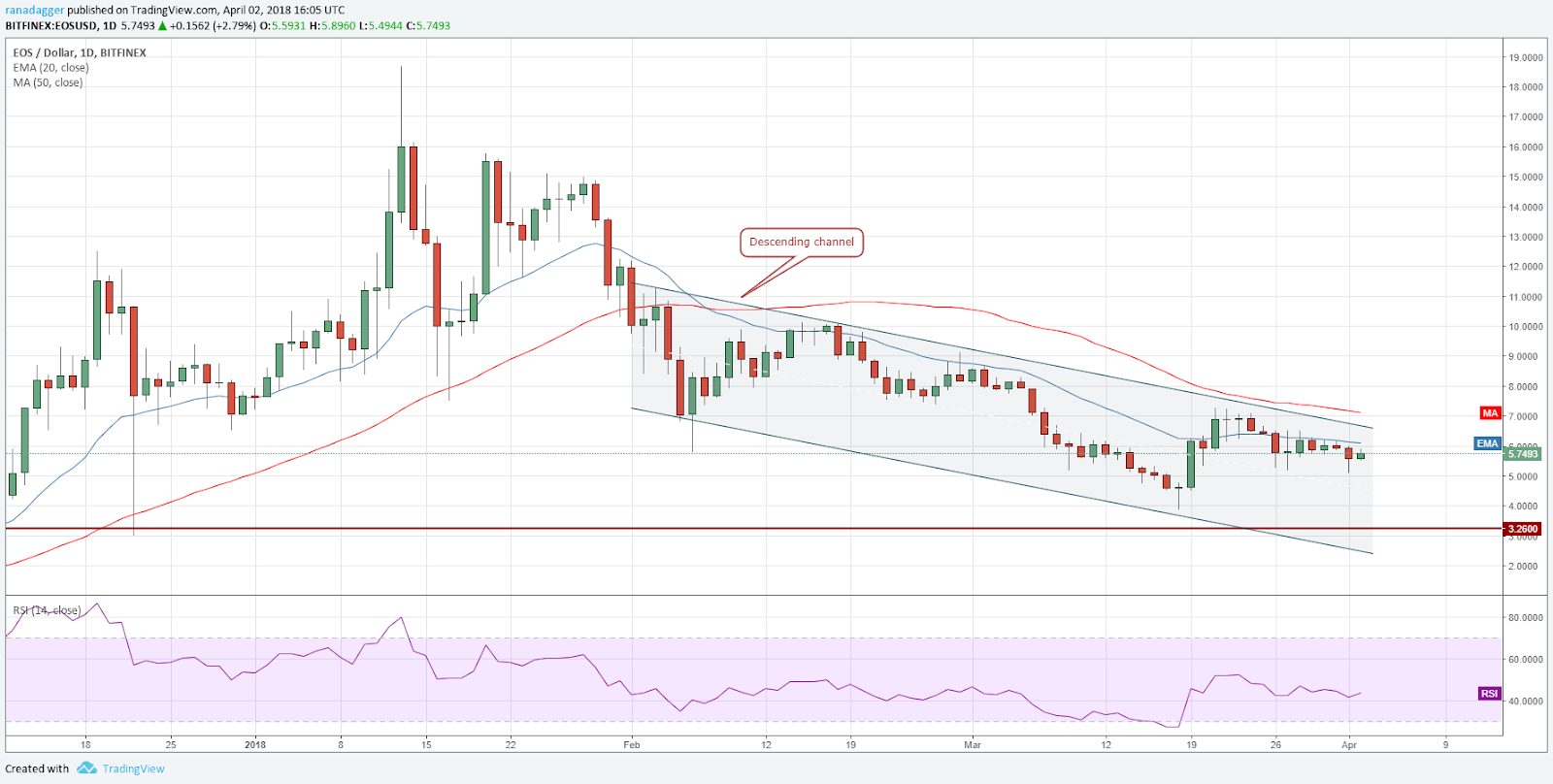 Once the EOS/USD pair breaks out of the 20-day EMA, the resistance line of the descending channel, and the 50-day SMA, it will become positive.

Hence, we have been recommending to buy the digital currency at $7.5, with a stop loss of $5. The target objective is a rally to $11.

Our bullish view will be invalidated if the virtual currency breaks below $5 and slides to $4 levels.