The cryptocurrency market first quarter made for some nightmare reading, but there is still optimism for Q2

There have not been many times in the cryptocurrency market where an extended period has seen negative growth; however, the first three months of 2018 have been the exception. In fact, this first quarter of 2018 has broken records and registers as the worst first quarter in the history of Bitcoin, and the second-worst quarter ever.

A week into Q2 crypto analysts and experts are approaching the next few months with optimism despite what has gone before. There are a couple of reasons for this, and if history is to be followed and noted, then Q2 holds a lot more promise and optimism.

Pressures that drove Q1 into the dirt are starting to ease, regulators are finding their balance, and even more unusual things like the end of Chinese New Year and tax-spending season can influence the second quarter positively.

When looking at Bitcoin as the figurehead of the cryptocurrency market, the drop in price is quite damning. And, in fact, Bitcoin was one of the better performers when taking into consideration the drop of most coins from their all-time highs from December and January.

To put it in context

Bitcoin has historically done poorly over the first quarter of the year in its seven years prior. This has been put down to a number of reasons, including the Chinese New Year which occurs in early February.

In it’s now eight first quarters, Bitcoin has had four negative starts to the year with 2018’s 50 loss being the worst, followed in second by 2014’s 39.47 percent loss. However, those losses pale in comparison to the growth of some years, such as 2013 which saw Bitcoin grow by 588 percent in three months. 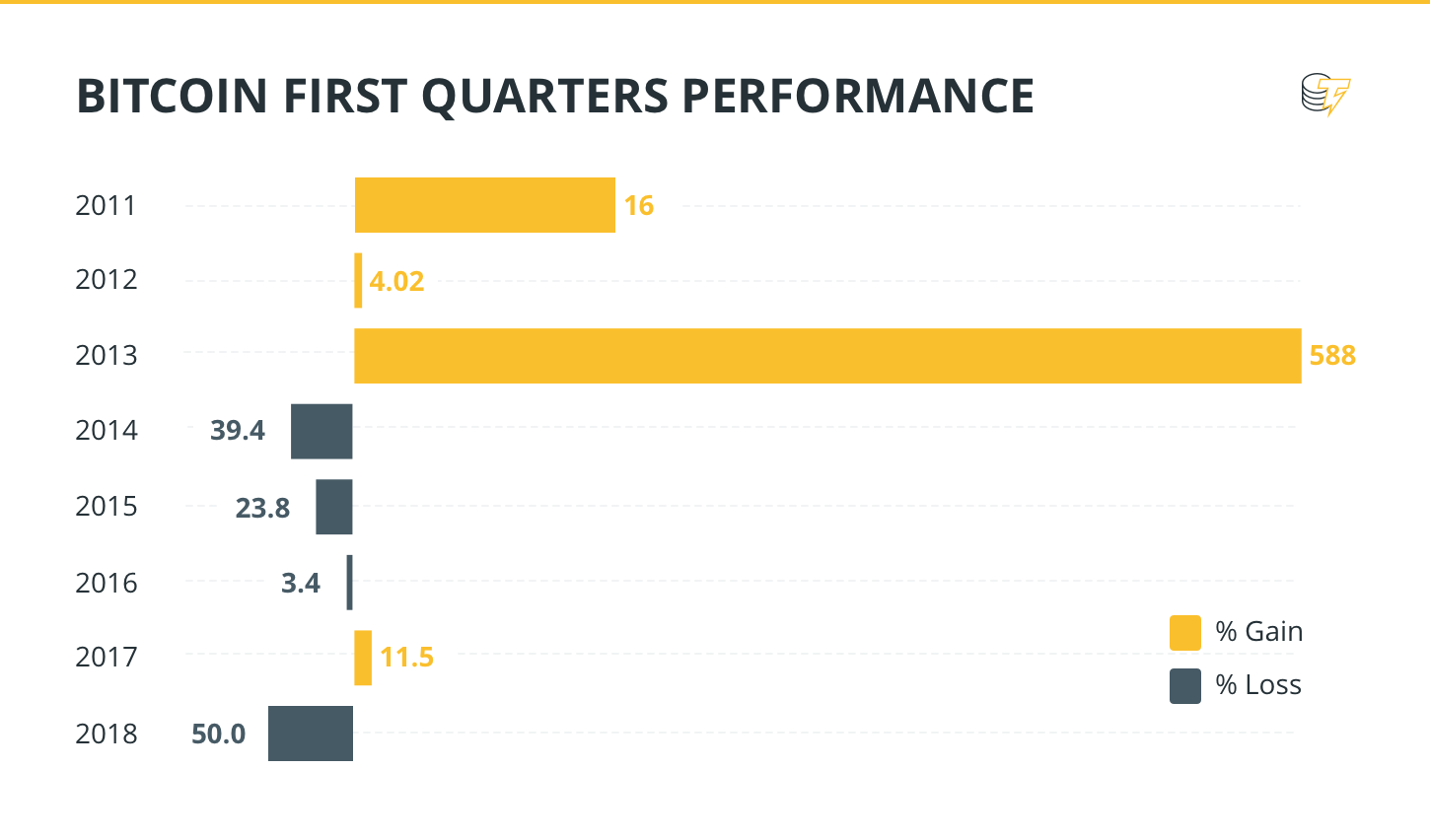 What is causing the decline?

2018 was always going to be an interesting year for Bitcoin, and other cryptocurrencies, following up from 2017 which was such a historic one in terms of price and mainstream adoption. Bitcoin reached its all-time high of $20,000 in late December as the cryptocurrency market thrust itself into the mainstream.

Suddenly, Bitcoin was on the lips of everybody; talk show hosts were trying to explain it to a broad audience and anyone was trying their damnedest to invest in it, often in foolish ways, such as with debt.

This also piques the interest of regulators and governments who realized that this was more than a fad and that they had to step in to try and institute some sort of control over this decentralized form of finance.

Regulators and governments stepped in, but they all took different paths. There has been a slew of different rules, laws and recommendations from different countries as to how Bitcoin and other cryptocurrencies should be governed.

Some have been stricter than others, and this has had its effect on the growth and interest for investors. However, the regulators, for the most part, have been trying to find a balance for this form of ungoverned currency to fit into the financial regulation that currently exist.

At a G20 meeting last month, Argentina's central bank governor outlined a July deadline for members to have "specific recommendations on what to do" and said task forces are working to submit proposals.

Of course, as an asset, regulated or otherwise, cryptocurrencies are still an interesting and exciting commodity to invest in, and before the regulatory uptick, there was a Wall Street interest spike.

That adoption of traditional investors has seen a correlation between cryptocurrencies and stocks, with the help of tools like Bitcoin futures also driving a broader appeal. The correlation between the stock markets and Bitcoin has become more evident, which indicates the digital currency is still being perceived as a risk asset as opposed to a safe-haven asset like gold. What does the future hold?

There is still massive optimism heading into Q2 from market analysts and cryptocurrency experts alike. Firstly, the bad news that drove the price of Bitcoin down, notably, the regulatory pressure, seems to be fading.

Secondly, the remaining bad news, or even FUD; like the South Korean ‘ban,’ the misinterpretation of the Indian ban, and more pressure from China, has had its effect, so any more bad news cannot do as much damage.

Naeem Aslam, a cryptocurrency commentator and Chief Market Analyst at ThinkCoin, expanded on this bad news cycle to Cointelegraph:

"If you look at the Bitcoin price action, a lot of the bad news is already priced in. Any new development which is negative for the cryptocurrency is considered only as an extension of the current event.

"This means that it is failing to produce any meaningful downside move for the Bitcoin price. Having said this, I am a little concerned that if the previous low doesn’t hold, it is highly likely that we may move towards the 5,000 mark.”

To this end, Aslam is of the opinion that Q2 will see some substantial growth:

“Towards the end of the Q2, I expect the cryptomarket to start moving higher or at least it should be close enough to form a bottom."

Brian Kelly, founder of Brian Kelly Capital and a "Fast Money" contributor, told CNBC that Q2 is always positive for Bitcoin and the cryptocurrency market.

"Q2 is always good for Bitcoin. There will be a significant rally here if seasonality brings tailwinds."

Seasonal tailwinds include a historical data showing a better performance in the second quarter, as well as a number of big conferences coming up, that usually inspire positive sentiment.

Kelly also believes that there will be a bounce off the negativity that has plagued Q1, including the regulatory crackdown:

"We've gone to the extreme of the regulation which is South Korea thinking they're going to ban it, the U.S. talking about everything being a security, to walking it back. You're seeing a shift again in that type of thing. I think most of that's behind us."

It is easy to look at a small section of Bitcoin’s history in isolation and start to panic; it is such a new, and volatile, commodity that when it is up, it is rocketing up, and when it is down, the same applies.

Bitcoin’s Q1 may be a poor performer, but zooming out a little bit shows the perspective of things. Aug. 5, 2017 was an important day as they cryptocurrency community celebrated Bitcoin breaking the $3,000 mark. That is less than half of where it is today; that was also only eight months ago today.

I am not dreaming. Remember ... up until a few years ago #amazon was losing money on every item they sold. Today $AMZN is worth $700 bln ... more than five times where #bitcoin is. There is a good chance $BTC will be worth 5X-10X what it is trading at today a few years from now.