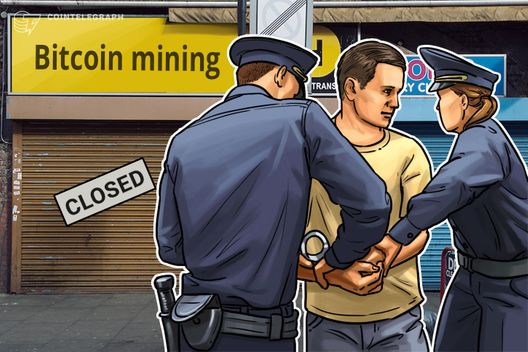 Russian law enforcement officers have raided and shut down a 6000-miners-strong crypto farm for not paying electricity bills.

Russia’s Ministry of Internal Affairs (MIA) officers have arrested two men that were allegedly involved in a cryptocurrency mining operation in Orenburg city for not paying for several million kilowatt-hours of electricity. The farm hosted more than 6,000 mining devices, as reported by local media outlet Lenta.ru Wednesday, April 11.

According to the MIA’s press release, the police went to inspect the spot after a local energy supplier reported significant power losses coming from the area of an abandoned factory. A search of the area led to the discovery of over 6,000 mining devices connected via electrical cables to a neighboring substation.

The crypto farm in question was likely one of the largest in both Russia and Europe. For comparison, a report published last year on the Steemit platform described a Bitcoin mining farm hosting more than 3,000 miners as “the largest” in Russia.

MIA’s representative Irina Volk claimed that the overall loss in unpaid energy from the cryptocurrency mining operation amounted to over 8 mln kilowatt-hours. The officers of the ministry have launched a criminal case against the two men that were detained in the process of the raid.

Earlier in March, Russian crypto miners called for the international mining community to take part in the ‘Crypto Hour’ by turning off their mining equipment for one hour in order to draw attention to the Bitcoin network’s increasing energy consumption, although some claim said consumption is a “non-issue.“