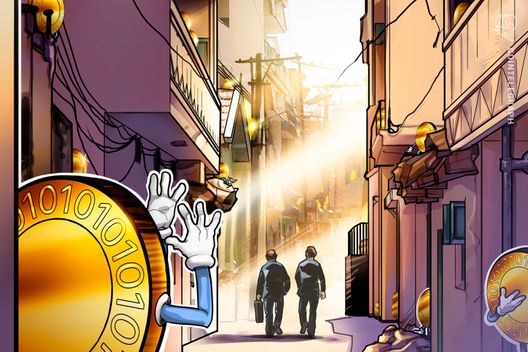 India’s central bank, the Reserve Bank of India (RBI) has caused a stir on April 5, 2018 by announcing that it would not allow regulated institutions like banks, payment service providers and non banking finance companies (NBFCs), to provide services to persons or businesses that deal with cryptocurrencies.

The RBI undertook this step due to a number of reasons which they claim as, “consumer protection, market integrity and money laundering, among others.” As the statement cites:

In view of the associated risks, it has been decided that, with immediate effect, entities regulated by RBI shall not deal with or provide services to any individual or business entities dealing with or settling VCs [venture capitalists]. Regulated entities which already provide such services shall exit the relationship within a specified time. A circular in this regard is being issued separately.”

Bibhu Prasad Kanungo, the deputy director of the RBI personally extended this message on a press conference:

“Internationally, while the regulatory response to these tokens are not uniform, it is universally felt that they can seriously undermine the AML (anti-money laundering) and FATF (Financial Action Task Force) framework, adversely impact market integrity and capital control. And if they grow beyond a critical size, they can endanger financial stability as well.”

A huge mistake that will lead to brain drain

The reaction to India’s move has been one of dismay. Tech investor Tim Draper, who has been in and out of the Indian markets, minced no words - calling the Indian government’s actions “the stupidest thing”:

“If I had a meeting with Modi, I would have let him know he is making a huge mistake.”

On April 5, 2018, trading platform Bitbns administered a petition, warning the government and the public about the possibility of “brain drain”:

“This is clearly stifling innovation around Blockchain. If a government does not facilitate adoption of new technology the country stands to left behind. It's not that a Google or an Apple gets created by a [government]. It's when entrepreneurs are provided the best possible launchpad when this happens. If as a govt you do not provide that - that's when people like Sundar Pichai or Satya Nadella have to leave the country and they become creators for some other countries.”

However, the announcement from the RBI did not appear to negatively affect rates of cryptocurrencies. Bitcoin (BTC) was seen trading near the $7000 mark with Ethereum  (ETH) in the region of $400.

The two popular exchanges in India are Unocoin and ZebPay. After the news of RBI’s decision to bar banks from interacting with cryptocurrency entities, Cointelegraph contacted ZebPay for comment, but has not received any response. The only mode of communication with its users was e-mail as well as a notice that appeared on their mobile app. 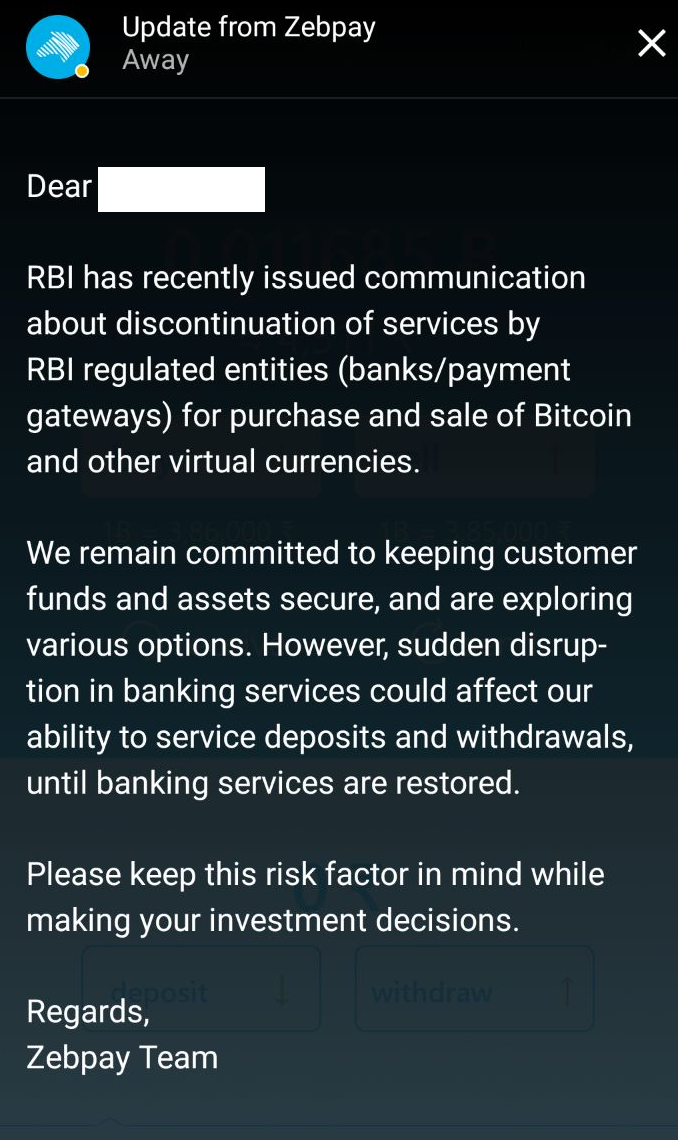 Meanwhile, Unocoin has released a press release which made it clear that they have received no notice from their bankers as of now and that funds of their users are safe with them:

“We just want to assure you that your funds (INR, BTC and other cryptos) are absolutely safe with us as ever and there is no need to worry about their safety. As always, you can still continue to use our platform as before and if need be you can still withdraw your funds. As on today, no banks (that we are working with) have issued any notice to us and when they do and if it has an impact on you and /or us, we will surely communicate to you.”

Ban it or tax it?

In his budget day speech in February, Arun Jaitley, Minister of Finance stated:

“Distributed ledger system or the Blockchain technology allows organization of any chain of records or transactions without the need of intermediaries … The Government does not consider cryptocurrencies legal tender or coin and will take all measures to eliminate use of these crypto-assets in financing illegitimate activities or as part of the payment system. The Government will explore use of Blockchain technology proactively for ushering in digital economy”

Then there is the Indian Income Tax department which followed this speech later in February by sending 100,000 ‘tax notices’ to Bitcoin Investors. The Chairman of Central Board of Direct Taxes (CBDT) explained:

“People who have made investments (in cryptocurrencies) and have not declared income while filing taxes, and have not paid tax on the profit earned by investing, we are sending them notices as we feel that it is all taxable. We found out that there is no clarity on investments made by many people which means that they have not declared it properly. We have informed all the DGs (Director Generals of Income Tax) across India, they are issuing notices and so that would be taxed.”

Following this, the words of Indian officials (and subsequent media reaction) contributed to a massive Bitcoin dip from $10,300 to below $9,512 in one day.

Bitcoin in news for all the wrong reasons

Meanwhile, compounding India’s cryptocurrency woes have been two stories that are unrelated to the so called ‘crypto ban’ but have propelled Bitcoin into the news cycle. These stories do cryptocurrency in India no favour as the local media often takes a frenzied tone on these matters and indulges in sensationalism. One has been the arrest of the Bharadwaj brothers. This duo had duped more than 8000 investors out of INR 2000 crores or $300 mln. They ran an investment scheme by the name of Gainitcoin, which promised investors guaranteed 10 percent monthly returns within 18 months. They have also been manipulating price of a token they launched in an initial coin offering (ICO).

In another alarming development a businessman Sailesh Bhatt in the western Indian state of Gujarat has made a serious allegation that an officer of India’s Gujarat Police beat him and extorted 200 BTC from him:

“They beat me up inside a room and threatened to kill me in a fake encounter if I did not hand over my Bitcoins … Amreli [city in Gujarat] SP Jagdish Patel and Amreli inspector Anant Patel were involved. I was forced to transfer Rs 13 crore [around $2 mln] in Bitcoins to Paladiya's account [Sailesh’s business partner].”

Seemingly taxation and regulation occupies officials’ minds more than the safety and security of cryptocurrency investors.

A rethink at the highest level needed

The Blockchain economy has its roots in cryptocurrency but also a lot of Blockchain tech firms are rich and store their wealth in cryptocurrencies.  If the Indian government wants these companies to bring in investments, technology and innovation to the country, it has to take a liberal stance. Otherwise, everyone has the freedom to choose jurisdictions which have easier regulations.

There are already some indications that major cryptocurrency companies in India are thinking of abandoning the country. Shivam Thakral, the CEO of BuyUCoin was explicit enough to tell the Economic Times:

“We have to move our company to some foreign country where regulations allow opening of bank accounts plus we won't be dealing in fiat currency. It will become a global operation rather than an India centric operation.”

Others too have expressed a need for a rethink on the position that the central bank has taken. As Navin Surya, Chairman of the Payment Council of India referring to the RBI decision told Bloomberg Quint:

“Risks exist in every system but we have solutions to each of those. So why not work with virtual currency traders in a similar way and create a risk-free system rather than indirectly shutting it down.”

RBI move a way of making space for its own digital currency?

It’s important to remember about the Reserve Bank ambitions towards the idea of its own cryptocurrency, named after the Indian goddess of wealth Laxmi. In the same press release that barred regulated financial institutions from dealing with crypto-related businesses, the RBI announced its intents to study the feasibility of a ‘Central Bank Digital Currency’:

“Rapid changes in the landscape of the payments industry along with factors such as emergence of private digital tokens and the rising costs of managing fiat paper/metallic money have led central banks around the world to explore the option of introducing fiat digital currencies.

While many central banks are still engaged in the debate, an interdepartmental group has been constituted by the Reserve Bank to study and provide guidance on the desirability and feasibility to introduce a central bank digital currency. The Report will be submitted by end-June 2018”.

Indians can still use, trade and pay with Bitcoin

Cryptocurrencies have a hidden strength in that they are decentralised. Indians can still trade in cryptocurrencies by using popular peer-to-peer systems like Bisq and localbitcoins or by simply exchanging Bitcoin for fiat with their local dealers. This strategy has worked in China where similar ban was imposed by the authorities.

If anything, this decision of the RBI would do Bitcoin users a favour, pushing them to discover that Bitcoin’s open secret, that it can be used by anyone, anywhere without fear and without the fear of state intervention. Hopefully India would be one of those thriving markets where people exchange Bitcoin for goods, services and fiat currency on a person to person level.