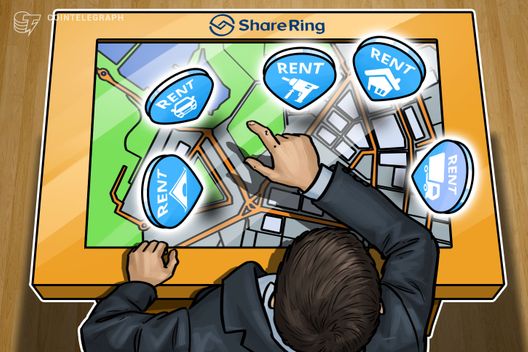 A company is building a Blockchain-based system to eliminate fragmentation in the sharing economy – and creating a single app that gives users access to “any available asset they wish to rent, borrow or share.”

A company is building a Blockchain-based system to eliminate fragmentation in the sharing economy – and creating a single app that gives users access to “any available asset they wish to rent, borrow or share.”

ShareRing claims the current market is extremely inconvenient for consumers. Although thousands of companies exist, many of them are specialized in one particular niche, such as caravans or office space.

This forces users to go through the arduous process of registering multiple accounts – and, given the fact that some of these small businesses only operate in a heavily localized area, there’s no guarantee that the items they need to borrow will be available where they live.

The Australian company has the goal of becoming the “Amazon of the sharing economy,” enabling users to lease “assets” from a broad range of categories through a single smartphone app. They would be connected to individuals nearby who have items they are willing to share, while rental companies would be able to develop their own “mini” app within ShareRing to reach greater numbers of prospective customers. ShareRing is already exploring deals with big brands, and the latest partnerships will be announced on its website.

In its white paper, the company lists areas where its technology could prove useful. Some examples include renting cars, trucks and trailers, as well as booking delivery drivers, sharing gardens, swapping books, co-housing, car sharing and social dining.

ShareRing’s Blockchain platform, known as ShareLedger, is already in development. “Highly customizable” smart contracts will be used to complete transactions, with the company stressing that typical users are not going to require advanced technical knowledge in order to use the platform.

“Taking things to the next level”

The team behind ShareRing already have experience in this industry after starting the vehicle-sharing brand Keaz in the middle of 2013. Offering solutions for both corporate users and consumers, the company now has offices in five countries – and its main technology, KeazACCESS, was launched in May 2015.

Executives say they have “decided to take things to the next level” through Blockchain because a company is yet to help this industry achieve its full potential. Their white paper argues that most people are even unable to name five businesses operating within the sharing economy – and the two examples most commonly used as answers, Airbnb and Uber, only cover two types of assets available to the public.

ShareLedger is also going to feature a dual token mechanism. Whereas SharePay is the currency that customers will use to rent assets, ShareToken allows providers to pay for access to the Blockchain. All users will be able to access their balances for these tokens in a lightweight wallet accessible from PCs and smartphones.

“Small transaction fees” are charged to providers who use ShareRing. There are one-off charges whenever individuals or businesses add an asset to the platform. Providers are also charged if “attributes” need to be added, allowing extra bits of information such as a Vehicle Identification Number to be linked to the asset. Finally, they will pay a fee every time their asset is rented out to a ShareRing user.

At the heart of ShareRing’s system will be a “clever, integrated app” which uses geolocation to show users which services are available nearby – and within two years, the company hopes that up to 1 mln assets will be available to share around the world.

Its Blockchain system will be publicly available by Sept. 2018, and KeazACCESS will be the first “client” integrated into ShareLedger.

ShareRing’s token sharing event is set to take place in May, with the company planning to run token hunts and several other competitions to spread the word and raise awareness of the project.