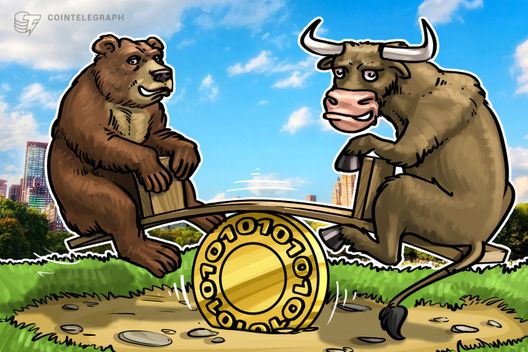 The current situation on the crypto markets is uncertain, with several analysts predicting significant growth towards the end of the year.

Have the cryptocurrencies bottomed out or will they fall again after a short pullback? That is the question troubling most of the market participants currently sitting on the fence.

A bottom can be confirmed only in hindsight but the analysts try to call it in advance, using various tools.

One such prediction is from the virtual currency focused hedge fund, Pantera Capital Management. Its CEO, Dan Morehead believes that Bitcoin’s low of $6,500 is probably the bottom. But, why should we take this prediction seriously?

Because, in December of last year, Morehead had forecast that Bitcoin might fall 50 percent, and that is exactly what happened. Also, he is not known to make too many predictions. Morehead expects Bitcoin to rally above $20,000 by the end of the year.

He is not alone in forecasting a recovery for the leading virtual currency. Fundstrat’s Tom Lee has called a target of $25,000 on Bitcoin for this year.

Business magnate Tim Draper has projected a target of $250,000 for Bitcoin by 2022. Brian Kelly, founder and CEO of BKCM LLC, an investment firm focused on digital currencies has seconded Draper’s forecast.

We had mentioned in our previous analysis that Bitcoin will face resistance at the 50-day simple moving average (SMA) and that is what happened. For the past two days, the virtual currency has been struggling to cross the 50-day SMA. Today, the price has turned down.

We expect the 20-day EMA to act as a strong support on any decline. Both moving averages have turned flat, which points to a range formation in the short term, instead of a trending move.

The support of the range is likely to be $6,757.26. The resistance of the range is still not final because if the bulls break above the 50-day SMA, the next move will carry the BTC/USD pair to $9,400 levels.

Traders can continue to hold their long positions with the stop loss at $6700.

If either of the levels hold, the bulls will again try to push the ETH/USD pair towards the 50-day SMA. Therefore, traders can go long on dips with a stop loss below $355.

The 20-day EMA is turning up, which shows the possibility of either a range bound action or the start of a new uptrend. We shall get more clarity in a couple of days.

We had recommended a long position on Bitcoin Cash in our previous analysis at $779. For the past four days, the digital currency has entered into a tight range. If the bears manage to sustain prices below $778.2021 levels, we may see a range bound action.

The 50-day SMA has not acted as a major resistance previously, hence, we expect a rally to $1114 levels.

Ripple is finding it difficult to break out of the 50-day SMA. The bears should now attempt to sink the digital currency below $0.56270 levels once again. If successful, a retest of the April 01 lows of $0.45351 will be on the cards.

On the other hand, if the bulls defend the $0.56270 levels, traders can initiate long positions on the XRP/USD pair with a stop loss at $0.45.

Stellar broke out and closed above the descending channel on April 15, triggering our recommended buy levels. The trade is live.

The XLM/USD pair has risen above the channel for the first time this year and has broken out of the 50-day SMA after early-February. Both these show that the bulls are accumulating at the lower levels.

The moving averages are close to a bullish crossover, which is an added positive.

The digital currency can retest the breakout levels of the channel. If the level holds, we should see a rally towards its first target objective of $0.36 and to $0.47 after that.

If price enters the channel once again, it will be a bearish move. We shall cover the position if price closes (UTC time frame) below $0.18.

Though Litecoin has broken out of the downtrend line 1, it is struggling to scale above the horizontal resistance at $141.026.

For the past four days, the LTC/USD pair has been consolidating in a tight range near the overhead resistance.

Even if the price breaks out of $141.026, it will again face resistance at the downtrend line 2. If price turns down from the current levels, we may expect a range bound trading action for a few days.

As we don’t find any buy setup with a good risk to reward ratio, we remain neutral on Litecoin. We shall change our view once it starts trading above the downtrend line 2.

Our recommended long position on Cardano is moving towards its first target objective of 0.0000323, where partial profits can be booked. The remaining positions can be held with a trailing stop loss, for a higher target of 0.000035.

The successful retest of the breakout levels at 0.00002460 on April 14 and the subsequent bounce is a positive sign. The 20-day EMA and the 50-day SMA have also completed a bullish crossover.

Our suggested long position on NEO is live from the levels of $64 that triggered on April 12. We had expected a quick move to $88 but for the past four days, the digital currency has been struggling to stay above the $64 mark.

On the upside, the 50-day SMA is acting as a resistance. Once this is crossed, the  NEO/USD pair should rally to the downtrend line of the descending triangle.

On the downside, the 20-day EMA will act as a strong support. If the bulls fail to defend this level, a retest of the lows at $44.16 is possible.

Traders should hold the position with the stop loss at $44. We shall close the position earlier if the critical levels break down.

Traders who follow us are likely long on EOS at $7.5. We had suggested to book profits on partial positions at $9.5, but the digital currency did not reach those levels. Currently, a retest of the breakout levels of $7.28 is on the cards.

The moving averages have completed a bullish crossover, which is a positive development. The 20-day EMA is just below the critical horizontal support of $7.28.

We anticipate a strong bounce from these levels, which should again propel the EOS/USD pair towards its target objective of $11.

If the 20-day EMA and the 50-day SMA supports break down, we might close the positions without waiting for the stops to be hit. Meanwhile, traders should continue to hold with the stop loss at $5.5.