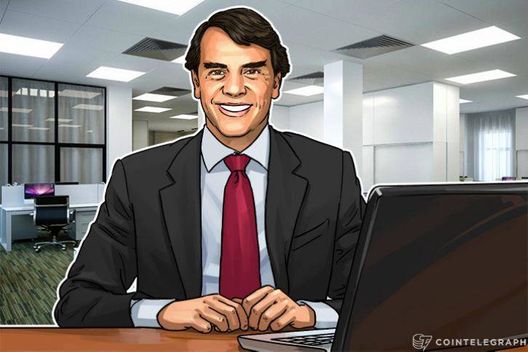 American VC investor and famous Bitcoin bull Tim Draper argues during a debate with Bitcoin skeptics that the technology is “bigger than the internet”.

American venture capital investor and Blockchain industry influencer Tim Draper claimed that Bitcoin (BTC) is “bigger than the internet,” and several other major developments in human history, during the Intelligence Squared US debate in New York City this Saturday, CNBC reported today April 23.

During the debate – which Draper undertook alongside Overstock CEO and Bitcoin bull Patrick Byrne and against two crypto skeptics – the billionaire investor compared Bitcoin, and evidently Blockchain in general, to his early investments in Tesla, Hotmail, and Skype. He went further by stating that Bitcoin would be “bigger than all of those combined,” and that the scale and importance of Bitcoin and the technology behind it exceeds that of major technological developments in human history, saying:

Draper also voiced his oft-repeated prediction that in five years time, no one will be using traditional government-backed money:

"In five years you are going to try to go buy coffee with fiat currency and they are going to laugh at you because you're not using crypto. I believe that there will be a point at which you will no longer really want any of the fiat currency."

As of December 2017, the venture capital investor was still holding around 30,000 bitcoins that he bought in a US Marshals Service auction in 2014, CNBC reported. If Draper is still holding his BTC today, the investment is worth almost $270 mln by press time.

At the Intelligence Squared debate, Draper also spoke on Bitcoin market dominance, claiming that the largest cryptocurrency is likely to win the "long-term crypto battle" against altcoins. Meanwhile, BTC dominance, or the percentage of total market cap that is Bitcoin’s, is currently around 38 percent, down from its monthly high around 44 percent.

Earlier in April, during a speech at his own Draper University, the VC tycoon predicted BTC will hit a whopping $250k per coin in the next four years. Draper also recently sat down with Cointelegraph for a “serious” interview, in which he claimed that “Bitcoin is clearly the leader” among cryptocurrencies.