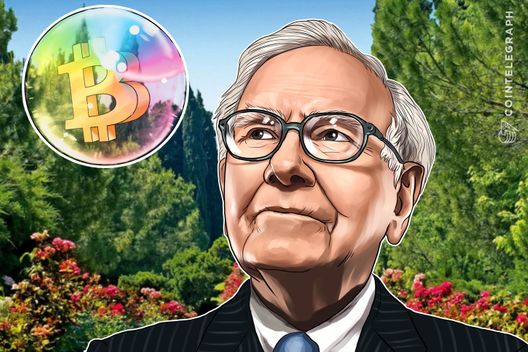 Holding his usual anti-Bitcoin stance, Warren Buffett claims that “buying Bitcoin is not investing” because it doesn’t “produce anything”.

87-year-old American investor and CEO of Berkshire Hathaway, Warren Buffett, has again scorned investment in cryptocurrencies, claiming that “buying Bitcoin is not investing,” in an interview with Yahoo Finance in Omaha, Nebraska, today, April 28.

“There’s [sic] two kinds of items that people buy and think they’re investing,” he said. “One really is investing and the other isn’t.” He added:

“If you buy something like a farm, an apartment house, or interest in a business […] [y]ou can do that on a private basis […] and it’s a perfectly satisfactory investment. You look at the investment itself to deliver the return to you. Now, if you buy something like Bitcoin or some cryptocurrency, you don’t really have anything that has produced anything. You’re just hoping the next guy pays more.”

Buffett went on to suggest that such investments are merely a speculative “game” and a “gamble” and that “no one knows exactly what it [Bitcoin] is.”

The so-called ‘Oracle of Omaha’ has repeatedly poured contempt on the crypto industry, claiming with oxymoronic “almost certainty" that cryptocurrencies “will come to a bad end,” in an interview this January, all the while admitting that cryptocurrencies are “something I don't know anything about.”

Buffet has been recycling the lack of intrinsic value argument since 2014, when he first dismissed Bitcoin as "a mirage" on CNBC. Buffett has also wielded the bubble argument against Bitcoin, as well as stating that BTC cannot be valued because “it’s not a value-producing asset.”