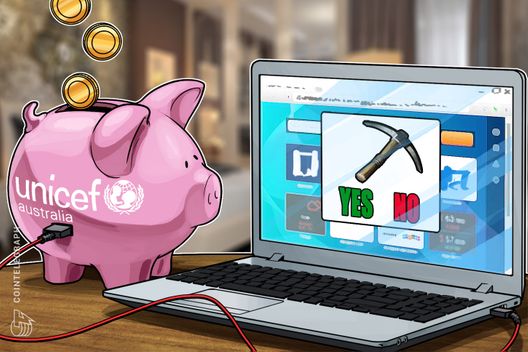 UNICEF Australia announced yesterday, April 29, an initiative that allows users to give over their computer’s processing power to mine cryptocurrency as a donation to the charity.

We're excited to launch The Hopepage. This innovative website allows you to easily donate some of your computer processing power to generate #cryptocurrency and fund life-saving aid for children in crisis. #UNICEF #ForEveryChild https://t.co/rPXCnTcahy

Tony Andres Tang, the digital brand and content manager of UNICEF Australia, told news outlet ITnews that they “are transparent in the fact [they] are borrowing a computers' processing power, and provide the ability to choose how much power is donated”:

“The HopePage [sic] is entirely user initiated, and they have the ultimate power to decide whether to participate or not."

The “How To” section of the website explains that you can “turn down the amount of processing power you’re donating,” noting that “mining is perfectly safe for your computer.” A recently published study on cryptocurrency mining by Concordia University noted that even users that willingly opt-in to crypto mining may not be aware of the possibility for higher electricity bills, slower Internet and computer performance, and a shorter lifespan for their device.

Earlier this year, UNICEF launched a two-month long charity campaign that asked PC games to donate their unused computer power to mine for Ethereum, the proceeds of which would go to Syrian child refugees. When the campaign ended on March 31, a little over 1,000 euros had been raised with more than 11,000 contributors.

In addition to being used for malicious cryptojacking incidents, the Monero-mining software Coinhive has been used by companies that are looking to earn revenue from their online visitors as an alternative to showing online ads. Last fall, illegal piracy site The Pirate Bay was found to be secretly mining for Monero on visitors’ computers, and major American cable television network Showtime also was revealed to be using Coinhive to mine Monero as an alternative revenue source.

More recently, news site Salon directly offered users the chance for an ad-free experience if they let their computer’s unused power be used to mine cryptocurrency, although the site notably does not mention mining directly.