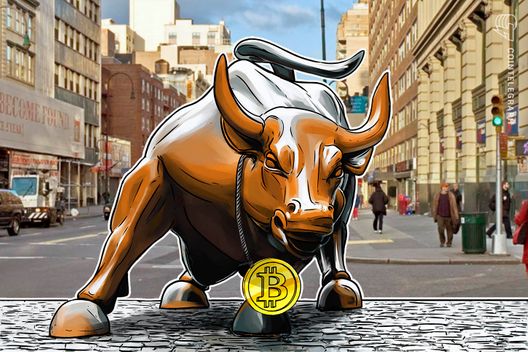 The New York Stock Exchange’s plans to offer swap contracts that would be settled in BTC will have a momentous impact on crypto adoption, commentators say.

Analysts Dominic Chu and Robert Kelly weighed in on recent reports that the New York Stock Exchange (NYSE) plans to offer Bitcoin (BTC) swap contracts, on CNBC Tuesday, May 8. Both Chu and Kelly argued that the fact that these contracts would be settled with the delivery of BTC itself is an important factor in Bitcoin’s mainstream adoption.

Both commentators were unanimous in considering that the plans of NYSE’s parent company Intercontinental Exchange (ICE) - news of which comes from “multiple reports citing sources familiar,” if true, could be of momentous consequence for the future of crypto.

Whereas the futures contracts currently being offered on CME and CBOE are ultimately settled in fiat, Kelly emphasized that ICE’s suggestion that crypto swap contracts will be settled in BTC is a significant milestone that could herald major Wall Street crypto adoption. Kelly explained:

“[The] physical delivery of Bitcoin…means that ICE has a custody solution. That has been the big hurdle. How do you hold onto these assets? These are generally bearer instruments…and so you have to have a third-party custody person. That’s the big deal, they have come up with a custody solution for institutional holders.”

Cold storage custodian solutions are currently offered by small operators, and ICE has not confirmed whether it plans to build an in-house cold storage solution or to outsource it. Indeed, ICE has so far declined to comment on the reports at all.

Kelly said that if ICE can offer a custodian solution that is SEC-qualified and fits with the SEC’s compliance requirements, this would “open the floodgates” to institutional capital, resulting in some “big price moves” in the crypto markets.

A custody solution would also open the door for pensions and endowments, he said, leading him to conclude that cryptocurrencies now “look to be becoming an emergent asset class…most obviously at the expense of gold.”

Kelly noted that the markets have been slow to respond, suggesting that many are underestimating the significance of the news.

ICE’s plans come just days after investment banking giant Goldman Sachs announced it will be opening a crypto trading desk “within weeks,” as well as recently hiring a cryptocurrency trader as vice president of their digital asset markets. This week, BTC stopped short of breaking the $10,000 resistance, trading around $9,200 to press time.