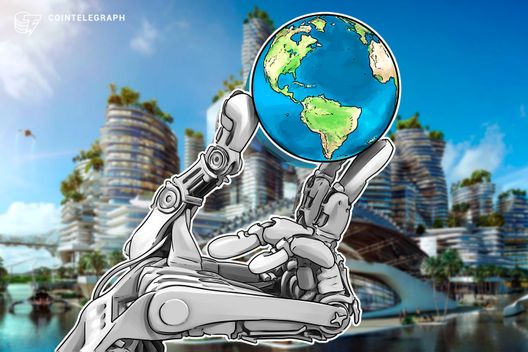 VP of Federated Investors has high hopes for blockchain, saying it is one of the five “key technologies” that will “drive this next industrial revolution.”

Steve Chiavarone, a VP at financial services company Federated Investors, made bullish comments on blockchain technology as an “economic growth driver” in an interview on CNBC Friday, May 11.

Responding to whether blockchain will be a driver of economic growth, Chiavarone noted the potential for automatization and increased efficiency blockchain offers, saying:

“When you think about it from an enterprise perspective, it has the ability to replace reconciliation, which is expensive and requires back-office and time and paperwork with more instantaneous verification [...] that will allow cost to be cut and that savings [sic] to be passed along.”

Chiavarone ranked blockchain in the top five “key technologies” that will “drive this next industrial revolution,” along with with automation, robotics, AI and the Internet of things (IoT).

When asked how investors can “play” the potential of blockchain, Chiavarone points to companies like Nvidia and Intel that “enable blockchain verification”, evidently referring to the production of computer chips used in mining.

He also notes how big banks like Bank of America have started taking interest in blockchain and “are investing heavily.” In addition, he stated that “any company with a supply chain can benefit from this [blockchain].”

Chiavarone is a Vice President and Portfolio Manager at Federated Investors, which reportedly manages $392.2 billion in assets.

On May 8, two United States House Subcommittees met to discuss the potential benefits of implementing blockchain technology in supply chain management. The hearing concluded that the tech could be used in a variety of areas, from US Customs and Border Protection to cyber-security, despite its current lack of industry-wide standards.