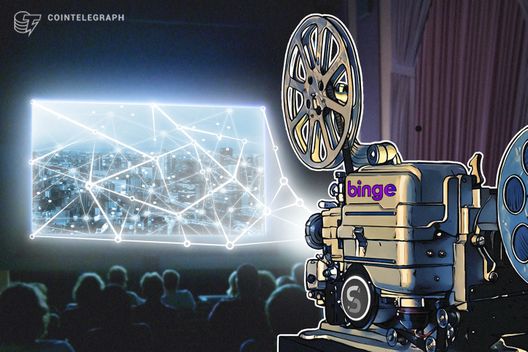 A media company closes a seven figure deal for the documentary for its blockchain based online streaming platform.

A new lead to the movie business

Slate intends to broadcast the documentary Beyond Bitcoin via its blockchain based online streaming platform Binge. The decentralized Binge platform provides low-cost, high-speed, high-definition media access for consumers worldwide, says the text of the press release.

During the Cannes festival in May 2018, Slate appeared at the center of the buzz surrounding blockchain technology and its potential to alter the entertainment industry. In Cannes, Slate announced their newly formed partnership with Sitges International Fantastic Film Festival (Sitges), where Sitges will adopt its digital ticketing platform, Slatix, powered by the cryptocurrency SLATE SLX, for the purchase of tickets and festival passes.

“This will mark the first time in industry history that a film festival will accept cryptocurrency as well as traditional forms of payment”, says the Slate press release.

Slatix is a blockchain-based, low-cost tokenized ticketing system that aims to provide benefits to consumers based on their loyalty. According to the press release, small and medium sized enterprises can benefit from Slatix’s low setup and operating costs, while the user-friendly app is intended to simplify DIY ticket distribution and redemption.

Based in Toronto and Los Angeles, the Slate Entertainment Group has launched several media platforms on its own blockchain, including Binge and Slatix.

Slate has launched its presale in May 2018. The public token presale will remain open until June 9, 2018. So far, the Slate team has overpassed its soft cap goal, having raised over $20 mln. The current discount is 45 percent and bonus is 3 percent.

As the Slate team reported to Cointelegraph, Hong Kong based HitBTC, one of the top 10 cryptocurrency exchanges in the world, will be listing SLX on its exchange.  HitBTC will host SLX with trading pairs against Bitcoin (BTC) and Tether (USDT).

“Slate Entertainment Group is especially pleased to announce the agreement during the presale as it assures buyers that they will be able to trade SLX on the open market. The listing on a major exchange will also expand SLX’s exposure to new markets and increase distribution after the initial sale” says the press release.