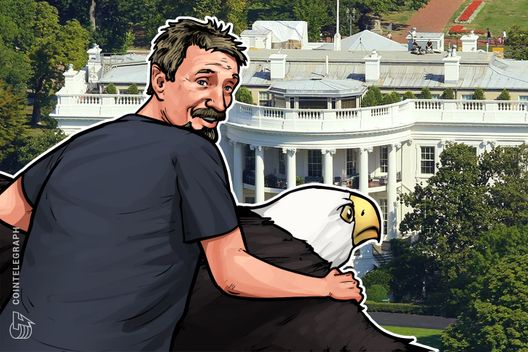 John McAfee, of McAfee AntiVirus Software, will be running for president in order to speak his “truth” and give a platform for the crypto community.

John McAfee, founder of McAfee Antivirus Software and now prominent crypto enthusiast, announced his bid yesterday, June 3, to run for US president in 2020 as a way to serve the crypto community, according to his Twitter account:

In spite of past refusals, I have decided to again run for POTUS in 2020. If asked again by the Libertarian party, I will run with them. If not, I will create my own party. I believe this will best serve the crypto community by providing the ultimate campaign platform for us.

This will be McAfee’s second run for president, after he lost his first bid in 2016 to former New Mexico governor Gary Johnson to be the candidate for the Libertarian Party.

McAfee mentioned his past failed bid by noting yesterday that if he “been more connected with the community in 2016,” he would have been better able to publicize the idea of “currency independence,” which he notes is already on “every Anericans' lips (sic).”

McAfee’s tweet about his 2020 run has now garnered over 600 comments, with McAfee responding to most of them with either a “thank you” or a “:).” One token platform has apparently already donated the equivalent of $390.85 to the campaign:

The future potential presidential candidate tweeted again today about the run, noting that although he doesn’t actually think he has a “chance of winning,” the bid will give him a platform to tell the “truth:”

Don't think that I have a chance of winning. I do not. But what truly changes America is not the president, but the process of creating one. If my following is sufficient I get to stand the world's largest stage and talk to the everyone, as I did last time, to tell the truth.

McAfee had already made headlines last week by announcing the creation of his own crypto-backed fiat currency that is redeemable for up to 100 minutes of facetime with him, as well as in February for revealing he made $105,000 per tweet promoting crypto projects.