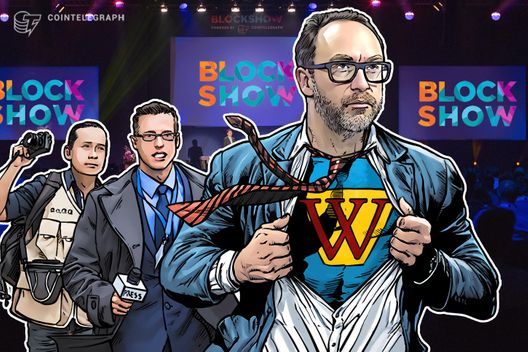 An interview with the co-founder of Wikipedia about the good and the bad of the crypto industry.

This interview has been edited and condensed.

‘Jimmy Wales is good at failure.’ Who would think that? Apparently, Jimmy would, as this is the message he was spreading during his speech at the biggest crypto conference in Europe, BlockShow, calling failure ‘an essential part of innovation.’ But the importance of not giving up is also clear from his speech, as the co-founder of multilingual online encyclopedia shared that Wikipedia was not his first project, but the most successful one so far.

Speaking in Berlin, the headliner of the event, announced his new project that everybody was waiting (I mean, not a single sзще in the audience!) - WikiTribune, that Jimmy described as ”all about bringing high-quality neutral journalism to the world.” 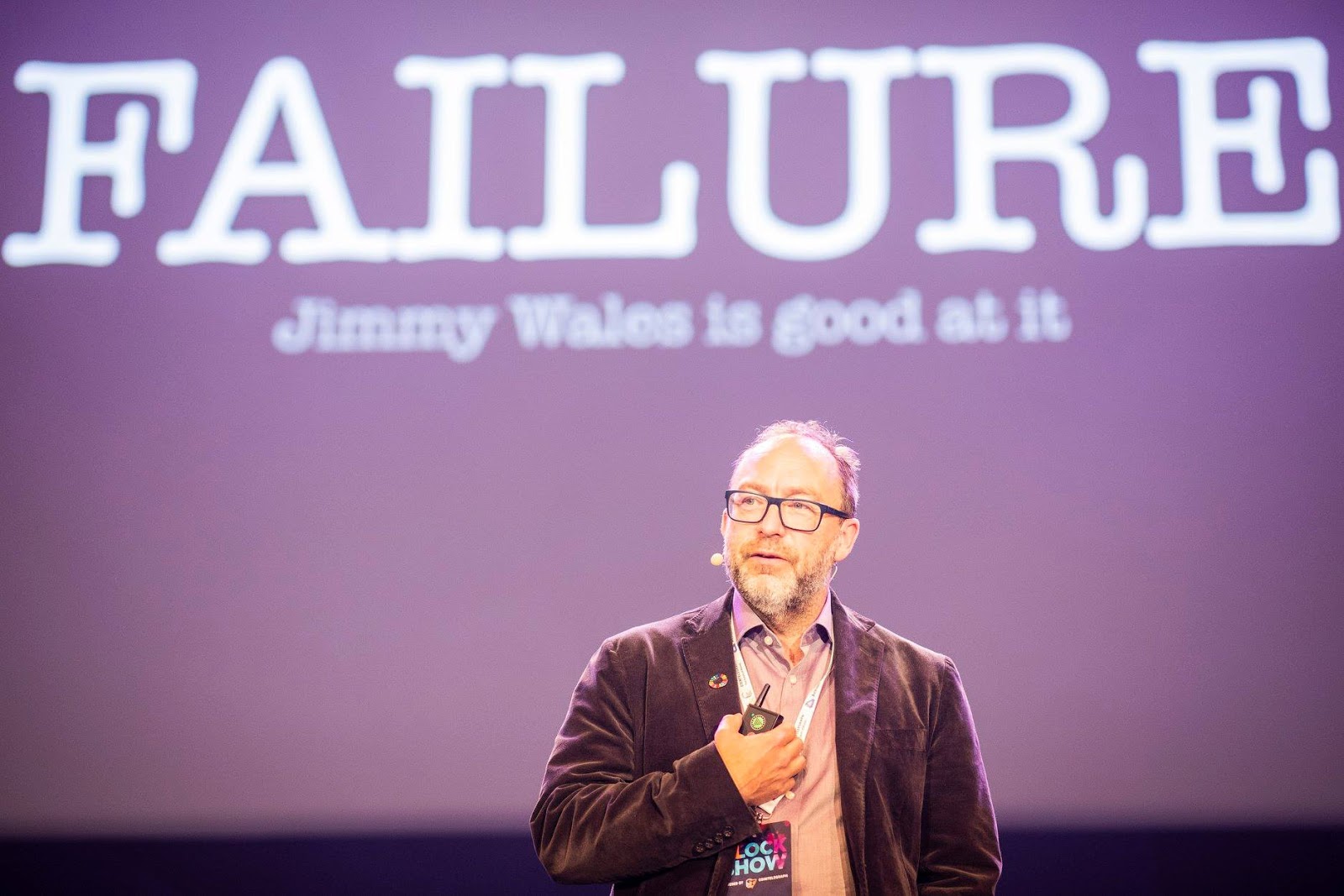 And what about crypto?

Catherine Ross: During your speech, you’ve called crypto a bubble, and you’ve also expressed this opinion in different interviews. Why do you think so?

Jimmy Wales: I’m old now, and I was in the internet world during the dot-com bubble, so when I say something is a bubble, it doesn’t mean that I think there’s nothing of value there. It means there’s a lot of noise and there’s a lot of investment money flowing in, and a lot of things are being invested into what does not actually make sense. A lot of projects are going to fail, but we additionally have a lot of scams, a lot of theft, a lot of crazy things happening. So, I just ask people to be careful.

CR: Well, that’s fair. Are you a crypto investor yourself?

JW: No, I’m not. I have had some crypto here and there, but I’m not an investor at all, so that’s the other thing to know about me. I have my own projects and beyond, that I don’t really invest.

CR: If you ever decide to launch a blockchain-related project, what kind of project will it be?

JW: I’m not planning to do anything directly in the blockchain space. I am very intrigued by the idea. A lot of people have pitched me on their ideas in the journalism space, I just don’t see it makes a lot of sense. I’ll continue to reflect and think. At this stage of my career, I’m not just trying to get money from people for something I don’t personally believe in. Until I figure it out, I’m not going to be doing anything.

CR: I get it. There is a possibility, but the project has to be of value.

JW: It has to resonate. It has to be something as meaningful to me.

CR: I’m sure you’ve heard about the Facebook and Cambridge Analytica scandal.

CR: The issue of privacy is really topical here [in the crypto world]. Do you believe cryptocurrency or the blockchain technology can offer a solution?

JW: I don’t know. I suspect not. I think that the issue is much broader and a lot of the ideas in this area failed to understand the real risk points and solve problems that people don’t actually have. I think that the biggest thing that is happening is that consumers are beginning to wake up to the idea that sharing all of your data has consequences that you might not have thought about. There are good consequences. One of the good consequences is that advertising is more relevant, and I think consumers appreciate that. I like the fact that I get ads for things that I’m interested in. There’s nothing wrong with that.

JW: Like boats, for example, yes, exactly. I get ads for boats because I like boats, I’m interested in boats and I might buy a boat, and so on. It’s a perfectly sensible thing. On the other hand, if political actors are using this to create disruption and hatred and, sowing divisions in society for a political game –that’s super problematic and that’s something I think people should be concerned about. I’m also concerned about the incredible pressure that’s been put on the industry of journalism for quite some time. That’s been a big problem. The number of excellent journalists, who are out of the job simply because the world has shifted in a way that’s not good for journalism, is a problem. I think we need to work ways through that and find new ways of supporting journalism.

At the stage, Jimmy stressed out the importance of fair journalism in all its aspects. He pointed out that media has been not performing to their best abilities. ‘Over the past 15 to 20 years we’ve seen an enormous decline in the funding of journalism leading us to the state of the world that I think unfortunate.’

That is one of the reasons he started WikiTribune, ‘an evidence-based journalism’ news platform where ‘professionally paid journalists working side by side with community members as equals.’

CR: Isn’t it the First Amendment Right violation? Do you think it’s fair?

JW: It’s really complicated. The first thing I’ll say it certainly doesn’t violate the First Amendment. The First Amendment is the restriction on Congress. Private platforms are not bound by the First Amendment. In terms of the fairness, I think the issue right now is that there have been quite clearly scams put forward that are not just technical violations of some securities rules, but actually scams where people have had their money taken. That’s a huge problem, so platforms like Facebook and Google have to be sensitive to that. Now, have they overreacted? Possibly. It’s a very complicated thing. It’s certainly something that I think needs to be seriously looked at by all the relevant parties, relevant players. But if people are advertising securities for sale that are in violation of the securities laws, that’s a real problem. I don’t blame these people who say, “We don’t want any part of that.” CR: The [crypto] industry saw its biggest rise in 2017. Did it reflect somehow on Wikipedia searches? Any increased activity on crypto-related pages?

JW: Yes, I’m sure. I haven’t actually looked at that data, but what we see at Wikipedia is that the search query, the search volumes for everything do tend to follow the news cycle. Things that suddenly become very interesting because they’re in the news all the time, we’ll see a lot more searches at Wikipedia. Because, you know, if you simply read in the mainstream media about Bitcoin and cryptocurrencies, it’s going to be very rare to get any kind of in-depth explanation of how it works and what it is, and Wikipedia is a pretty good place to go for that kind of broad background information. Even the story of Satoshi Nakamoto is a romantic story, it’s got a huge amount of press, it’s very intriguing. A lot of people read the article on Satoshi Nakamoto, I’m sure, millions of people.

CR: You have a PhD in finance, if I’m not mistaken.

JW: I did a course on PhD, but I never finished the dissertation.

CR: Was it on purpose or did you just get bored?

CR: I understand that. There’ve been a lot of discussions about how to regulate the [crypto] space. And you personally, do you consider cryptocurrency a commodity or utility?

JW: There’re many, many different aspects. There’s blockchain as a technology. Blockchain as a technology is not something that needs regulation. You’ll occasionally hear a politician saying, “We need to ban cryptography,” but that’s stupid and crazy and you’re never going to do it with math. You can’t ban math. You can’t ban blockchain. It’s math. At the same time, we see a lot of things going on that it’s very difficult to say they’re anything other than just scams. People are making millions of dollars of other people’s money with no accountability and that deserves law enforcement for investigation. We see a lot of the hacks and Bitcoin or other coins being stolen because somebody hacked the server and got the keys. That’s what the police are for, right? Ideally. I feel like there’s been far too little response. You know, if you walked into Citibank and walked out with 56 million dollars’ worth of gold…

CR: Not your money?

JW: Yeah, not yours. You went, and you picked a lock and you stole the actual gold [and put it in] the back of a truck, then there’d be an army of FBI agents investigating this. I feel like a lot of the cryptocurrency thefts have gone [unsolved]. The police are like, “We don’t know what to do,” so they do very little. That’s not to criticize them, that’s just the fact that we don’t see the right kind of law enforcement response. People don’t think about it as regulation, but of course it’s against the law to steal things. I also think that for the consumers and for the brand image of the whole cryptocurrency space there is a feeling that ‘G, it’s very speculative, I might invest $100 to make $1000, or I might just get my money stolen. That’s not a good start for a revolution and the way that we transact. I think that we should welcome the rule of law. I would even say, the rule of law is the first step, never mind regulation. And of course, we run a risk, as we always do in technology, that legislators who have almost no understanding of what’s going on will pass regulations that don’t make any sense. We’ve had that in the internet space forever. We have it, in my opinion, now with GDPR which I think is just bonkers. It’s an attempt to solve our problem, but it’s not going to solve the problem. It’s just burdensome.

CR: It seems like an attempt to simply ‘do something.’

JW: Exactly. What I’ve said about GDPR, actually I’m not the first who originally said this, but I’ve seen people saying, “If you’re going to design a regulation that is intended to entrench Facebook and Google in their privileged positions, you could hardly do better that GDPR because it’s just really burdensome for startups, and it’s not much a burden for them.” I mean, it is a burden for them, but it’s a small price to pay to maintain a monopoly. So anyway, I think those are the kinds of things I think we should be worried about.

CR: Okay, and governments? Should they embrace cryptocurrencies and blockchain? Can they benefit from that?

JW:  It depends. I would say, there’re a lot of interesting potential applications. I think that right now, one of the things that’s going on is that there are a lot of vendors or hawking products that don’t work, that are vapourware, and governments can, like any other buyer, be duped. They need to be very cautious and very careful. I think particularly when they’re dealing with taxpayer money, there’s a very good reason to be extremely cautious about new technologies, not to reject it entirely but, you know, the first person who comes by and [tells you]“We’re going to put all of your health records on the blockchain,” [you need to ask them] “Really? What does that mean exactly? How exactly is that going to help? What exactly does that entail?” Because you’re going to pay millions for consultants to do something that doesn’t actually work. It doesn’t mean that we won’t necessarily move in that direction, but I want to see governments moving very cautiously in this space.