All but two of the top 100 cryptocurrencies by market capitalization are back in the green, as markets bounce back in response to good news from U.S. regulators today.

June 14th: all but two of the top 100 cryptocurrencies by market capitalization are are making gains, according to Coinmarketcap data. Gains in of over 10 percent in some coins are a welcome respite for investors after crypto markets took a battering over the course of last month. Today’s gains are likely due to positive news that Ethereum (ETH) will not be regulated as a security under U.S. law.

Bitcoin (BTC) is now up 5.89 percent in the 24-hour period, trading around $6,688 at press time. The leading cryptocurrency began to see a reversal of its downtrend late afternoon today, recovering from its intraday low of $6356.

As of press time, Coinmarketcap data indicates rising BTC trading volumes of $5.1 bln over the 24-hour period, up from their weekly low of $3.8 bln.

To better enjoy the rally, Bitcoin’s supporters can now count among them the former Chief Strategist for the Trump administration, Steve Bannon, who, as Cointelegraph reported today, reportedly holds a “good stake” in Bitcoin.

The controversial figure has even raised the idea of launching his own cryptocurrency, dubbed the “deplorables coin” in an homage to Hillary Clinton’s reference to Trump supporters as a “basket of deplorables.” 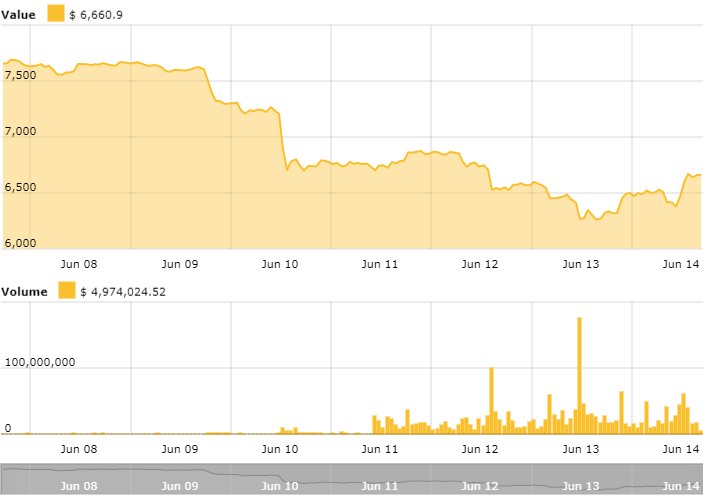 The leading altcoin has likely spiked in response to remarks from a senior Securities and Exchange Commission (SEC) earlier today that Ethereum is considered to be sufficiently decentralized to escape a securities classification under U.S. law.

“Based on my understanding of the present state of ether, the Ethereum network and its decentralized structure, current offers and sales of ether are not securities transactions.”

Recent months have seen mounting uncertainty over whether Ethereum would be considered a “noncompliant” security for failing to register its Initial Coin Offering (ICO) with the SEC back in 2014.

Last week, SEC Chair Jay Clayton stated that he believes Bitcoin (BTC) is also not a security, as it acts as a replacement for sovereign currencies.

Unlike Ethereum (ETH), Ripple (XRP), and virtually all ICO tokens, the suggestion that Bitcoin should be regulated as a security has never gained much traction, given that the cryptocurrency has been mined since its inception.

Crypto regulatory clarity has been forthcoming today in Asia as well, with the Thai SEC confirming that five domestic ICOs are now ready to raise funds via the country’s new regulations governing cryptocurrencies that took effect May 14. 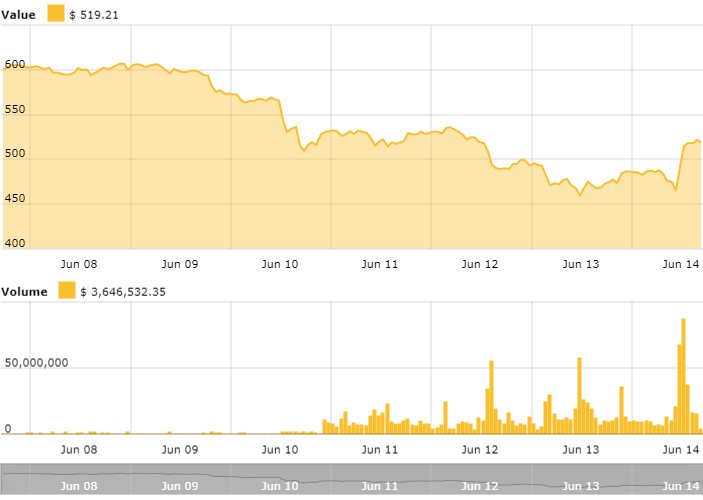 Among the top ten coins by market capitalization, EOS has seen the most impressive growth, up 13 percent over the 24-hour period, trading at $11.41 at press time. The altcoin is currently the fifth largest by market capitalization, having completed its year-long $4 bln token crowdsale at the beginning of this month, in what became the largest ICO in the industry’s history.

As of today, according to EOS Block Producer voting statistics, the threshold for positive votes to launch the EOS mainnet now has been reached.

Total market capitalization for all cryptocurrencies is around $290 bln at press time, up significantly from its intra-weekly low of $271 bln.

Hear that? That was the entire crypto industry breathing a collective sigh of relief

Earlier today, Tom Lee of Fundstrat Global Advisors told Bloomberg that Bitcoin’s recent "gut wrenching" declines may be linked to Bitcoin Futures expirations on CBOE and CME futures. According to Lee’s analysis of six expirations since CBOE Bitcoin Futures launched, Bitcoin has fallen 18 percent on average in the 10 days preceding each expiration, with the price recovering six days later.

Although he is an outspoken Bitcoin bull, Lee also raised concerns over weak inflows into the crypto space, “more net supply” in 2018 “amid initial coin offerings, mining rewards, and capital gains taxes,” and “slow progress” in facilitating institutional investors.

Notably, leading U.S.-based crypto wallet and exchange Coinbase opened its Index Fund for large-scale investors today. The fund, whose creation was announced in March, is available only to U.S. resident accredited investors – those who have a net worth of more than $1 mln or an annual salary of more than $200,000 – who invest between $250,000 and $20 mln.