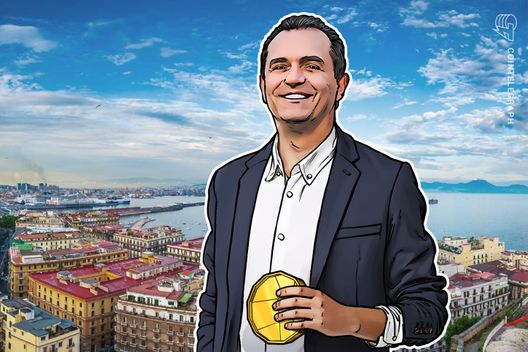 A working group devoted to blockchain on the initiative of institutions, hundreds of volunteers from all over the world, a big and efficient plan for the future – it’s happening in Naples, the capital of the Italian region of Campania in the south of the country. The city, through a recent press release, announced the creation of a special “focus group,” whose purpose is to “develop and eventually implement objectives related to blockchain technology”.

In response, hundreds of scholars, experts, professionals and enthusiasts signed up as volunteers to participate in the project. We are talking about 300 people from all over the world.

We spoke with Felice Balsamo, an associate of the mayor of Naples, so that he could explain to us the details of one of the very first institutional projects in Italy. One could notice Felice’s competence in talking about ICOs, cryptocurrencies and blockchain as a tool to speed up government procedures.

Felice told Cointelegraph that Naples started discussing this project last December. Currently the administration is creating focus groups with participants divided by skills and goals. Among the volunteers there are students, engineers, developers, as well as lawyers, accountants and spokespeople of various institutions.

All the discussions start from a central theme: transparency. Volunteers will examine and develop possible solutions for birth records, elections and public administration in general. Another group will study the issue of transparency from a “private” point of view instead.

The focus groups won’t deal with just public administration, but also the businesses of the city — the beating heart of its economic life.

Solutions will be studied to train small- and medium-sized enterprises, teaching them to accept cryptocurrency payments and to embrace the advantages of these technologies.

Other focus groups will deal with international relations with other cities active in the sector, including Spain, Portugal, Argentina and Venezuela, involving city councilors.

There is also talk about fundraising for projects necessary for the city and even about an ICO aimed at developing a city cryptocurrency.

According to the mayor’s associate, the focus group could indeed create a new cryptocurrency, designed to promote transactions between public administration and citizens, but also contribute to the city’s economy with many different projects.

Among the participants there’s also ANN — a company which operates in the field of public transportation — and ASIA — a society specialized in environmental health services.

There are many ideas, but also many challenges. An example of this is provided by Felice Balsamo himself, who asks:

“What would happen if the city of Naples would receive a Bitcoin donation?”

The city often receives money and property donations, Felice explains, but what would happen with a cryptocurrency donation? Which institution should accept this donation? What regulation is necessary to accept it?

The Italian Agency of Revenue (Agenzia delle Entrate — the governmental body aimed at collecting taxes and revenue) is also a member of the group, and it will surely be an important resource to solve these problems.

After all, the various discussions will deal with issues that the Italian government would consider sooner or later. Will the focus group in Naples be an explorer for the institutions of all of Italy?

Vision of the Mayor

Cointelegraph spoke with Luigi de Magistris, mayor of Naples, to better understand the vision of the city council about the project.

Cointelegraph: Do you think these new technologies could be beneficial for an economy such as that of Naples?

Luigi de Magistris: Naples is considered the capital of the Mediterranean. In the last years we introduced important innovations in the field of administration, implementing a proper grassroots democracy. Just think of all our decisions considered innovative, such as the registry for civil partnerships we introduced, or the collective use of public assets: our experience is considered an example by many Italian and European cities. We were the first major city to issue an electronic ID through 24 registration ATMs.

Thinking about an economy based on blockchain, based on participation by the people, could be a valid solution for the regulatory and historical constraints of traditional finance.

Combining traditional economy with a new economy based on cryptocurrencies could lead to a huge economic potential for over 3.5 million residents of the metropolitan city of Naples.

Cointelegraph: What’s the purpose of “generating, distributing and using a new cryptocurrency (ICO) tied to the economy of the city,” as you can read on the official page of Naples City?

Luigi de Magistris: I have to say something first. In the last few years Naples has become the Italian city with the fastest-growing tourism sector, our airport is the first in terms of traffic, Naples is the most searched city for tourism on the web. This revolution, which happened in just a few years, involves the adjustment of supply and demand. This means improving our services and public transportation, experimenting with innovative payment systems, attracting a very different target, deploying an alternative system for electronic payments throughout the territory.

We are studying other [Italian] towns like Rovereto, or other cities in Europe like Barcelona, or Portugal, or our neighbor Switzerland. But in our case we want to open this new technology to cryptocurrency owners, generating a new economy in the city, regardless of whether we develop a new currency or not: this will be a long process, as shown by over 300 experts who signed up for our “public calling” from all over the world.

We want to involve trader associations and businesses in our city, that could expand their market thanks to the current availability of cryptocurrencies.

The creation of our ICO, in compliance with other programs already existing in Europe, could be one of the objectives of our project Napoli Autonoma [Autonomous Naples].

The future of the economy and public administration could be dramatically changed thanks to the potential of blockchain technology and cryptocurrencies.

Recently, the Barcelona administration has revealed that it wants to establish a digital center to promote the growth and development of the blockchain ecosystem.

In March, Dubai unveiled a virtual business-to-business market in the pipeline, designed for the tourism industry and based on blockchain technology.

Now there is also the southern Italian city of Naples that joined the innovative movement which is spreading throughout the world.