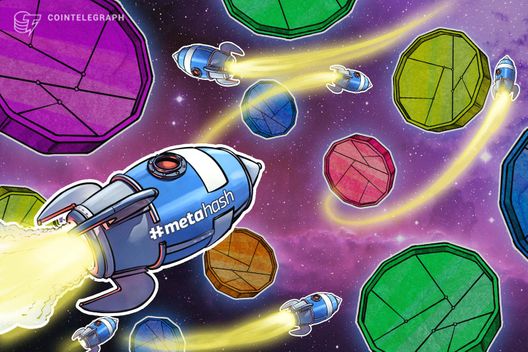 A blockchain-based digital asset exchange network has begun trialing a protocol which offers “unprecedented” speeds of more than 60,000 transactions per second.

A blockchain-based digital asset exchange network has launched a “lightning fast” protocol which is capable of processing more than 60,000 transactions per second.

#MetaHash says its protocol, known as #TraceChain, takes no longer than three seconds to approve each transaction. A trial of its geographically-distributed network has begun and a free browser is available on Windows, Linux and Mac OS X platforms, with mobile-based apps for iOS and Android to follow shortly.

The company describes #TraceChain as one of the four components that make up its system – coming together to create a “simple, synergistic entity.”

Other components include the #MetaHashCoin, a digital asset that acts as the means of payment across the platform. These can be exchanged from or into Bitcoin and Ethereum within the system.

Meanwhile, #MetaApps has been billed as a “revolutionary platform for building standalone decentralized applications” – boasting a graphical user interface that allows them to look like the web services and applications commonly used by the public. For ease, projects that have been created in other programming languages can easily be converted into a #MetaApps piece of software.

“Even complex apps such as YouTube or Facebook can be decentralized with #MetaApps,” the company’s white paper says.

The browser where users can access these decentralized applications, as well as their multi-currency wallet, is known as #MetaGate.

#MetaHash’s team told Cointelegraph: “Contrary to comparable networks, #MetaHash is expertly designed to process record volumes of transactions with relatively inexpensive hardware, resulting in some of the industry’s lowest per transaction commission rates.”

The trial period is expected to be operational throughout the second quarter of 2018, with more than 200 temporary servers involved worldwide. These servers will be replaced by token owners' nodes once the tokens are distributed. Overall, the company says its network will be capable of quickly processing in excess of five billion transactions on a daily basis.

#MetaHash has revealed how its blockchain system compares with major players in the marketplace – including Bitcoin, Ethereum and EOS.

Ethereum offers a slight improvement – with a transaction approval time of five seconds and the ability to handle 30 transactions per second. Then there’s EOS, where transactions are approved in five seconds. Although this system can process anywhere between 1,000 and millions of transactions a second, its level of decentralization is described as minimal, whereas #MetaHash’s is high.

“The flagship of blockchain”

#MetaHash has described the speed of its decentralized network as “unprecedented,” with transaction costs that are lower than any other regular blockchain. There are five stages of consensus before a transaction is verified – and the company says the information stored on #MetaHash is nearly impossible to corrupt or modify.

“To do so, it would be necessary to successfully attack the #MetaHash network as well as Bitcoin, Ethereum and other networks,” it says.

#MetaHash says Round A of its initial coin offering is going to begin at 12:00 UTC on June 29, 2018, aiming to allocate 920,000,000 #MetaHashCoin (#MHC), equivalent to 10 percent of its token emission. Interested parties can purchase #MHC for $0.0391 per token (will be accepted in ETH and BTC at the exchange rate at the time of purchase).

According to the company, the first buyers of tokens will enjoy the attractive initial price which is at least two times lower than at the next phase. Moreover, they may also get the maximum advantages of the early forging, the start of which is planned for August 2018.

#MetaHash says that, as an evolution of mining, forging is based on different principles and offers a set of unique advantages for crypto enthusiasts, including high accessibility and effectiveness even for smartphone-based forgers, low costs, no overheat and damage to the environment, and rewards for the use of active tokens in verification and support of the network.

All of this will be followed by further releases of the network’s components, including tools for third-party developers, extensive security testing, and other activities, according to the project’s roadmap, thus paving the way for the launch of a fully decentralized system in the first quarter of 2019.