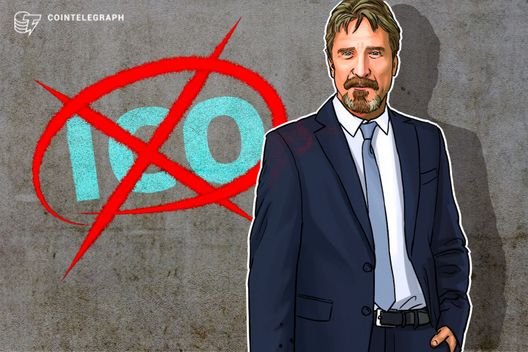 John McAfee said that he is no longer promoting ICOs due to “SEC threats.”

Anti-virus pioneer and crypto evangelist John McAfee tweeted that he will no longer work with initial coin offerings (ICOs) or promote them due to “threats” from the U.S. Securities and Exchange Commission (SEC). The SEC declined to comment on his statement.

Due to SEC threats, I am no longer working with ICOs nor am I recommending them, and those doing ICOs can all look forward to arrest. It is unjust but it is reality. I am writing an article on an equivalent alternative to ICOs which the SEC cannot touch. Please have Patience.

In April, McAfee revealed that he charges $105,000 per tweet to promote cryptocurrency projects and products. McAfee claimed that if you divided the cost by his total number of Twitter followers, the “cost per investor reached” is only $0.13, to which he added, “This is orders of magnitude less than any other approach.”

In January, Cointelegraph asked McAfee in an interview whether anyone had tried to pay him for promoting a project or product, and if so, which projects. McAfee replied:

“I would say definitely they tried to pay me. I'm not going to talk about my personal finances where I make my money or from who. I set up on stage as it’s my business and it should be everybody's business. And actually, I think it's rude to even ask such questions of people. No offense.”

When asked whether he felt responsible for the pump-and-dump schemes that sometimes follow his endorsement, he said, “Absolutely not.”

Last month, McAfee announced plans to release his own “fiat” currency backed by cryptocurrency, which will be redeemable for face time with him. He said that the  McAfee Promissory Note will be connected to a blockchain by tokens and can be redeemed for up to 100 minutes of personal time with him at a location anywhere in the world.

The crypto advocate also hit headlines earlier this month when he announced a 2020 presidential bid as a way to serve the crypto community. McAfee then tweeted about the run, noting that although he doesn’t think he actually has a “chance of winning,” the bid will give him a platform to tell the “truth.”

Last month, the SEC launched a fake ICO website to increase awareness of the typical warning signs of scam ICOs and to promote investor education. The website includes such details as a misleading and blurry white paper, guaranteed returns claims, celebrity endorsements, and a countdown clock that is “quickly running out on the deal of a lifetime.”

In April, SEC Commissioner Robert Jackson criticized ICOs, stating that the crypto space “has been full of troubling developments that we’ve seen at the SEC, and especially the ICO space.”