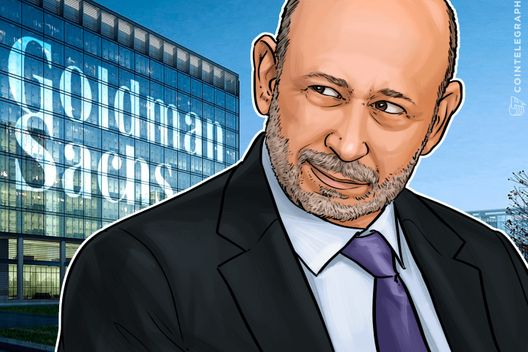 Goldman Sachs CEO has reiterated his optimism about Bitcoin adoption, comparing it to the early days of fiat paper money.

Goldman Sachs CEO Lloyd Blankfein reiterated his positive stance on cryptocurrencies in an interview with Bloomberg at the Economic Club of New York, June 19.

When asked about the chances of crypto to become a “real issue,” Blankfein said that the adoption of cryptocurrencies like Bitcoin (BTC) could happen similarly to how the adoption of paper money, which replaced gold and silver coins, has happened.

Addressing the evolution of money, Blankfein pointed out the common features between paper money and crypto, apparently implying that they both do not have intrinsic value. Noting that paper money has managed to become the main form of money regardless of that, he then rhetorically asked: “why couldn’t you have a consensus currency?”

According to Blankfein, it is “too arrogant” to argue that cryptocurrencies cannot be adopted on a large scale only because they are “uncomfortable” or “unfamiliar.”

In 2017, Blankfein made a similar statement, claiming that people first distrusted paper currency and later accepted it. He then implied that Bitcoin could be adopted as a means of exchanging value in the future, even if it is not widely accepted today.

“But there is a lot of things that there weren't for me in the past that have worked out very well. If it was 20 years forward and it worked out, I could tell you why it worked out. But based on everything that I know, I am not guessing that it will work out.”

Goldman Sachs as a whole is known for its sceptical stance on cryptocurrencies. Back in 2014, the company argued that Bitcoin is not a currency. In 2017, it acknowledged that it has become more difficult for institutional investors to ignore Bitcoin and other cryptocurrencies. In late 2017, the company was even rumored to be opening its own crypto trading desk.

Despite refuting the reports in early 2018, Goldman Sachs eventually did turn to crypto, claiming that Bitcoin “is not a fraud,” and revealing plans to buy and sell cryptocurrency. In May, Goldman Sachs-backed Circle app launched a new feature that makes it easier for “newbies” to enter the crypto market.