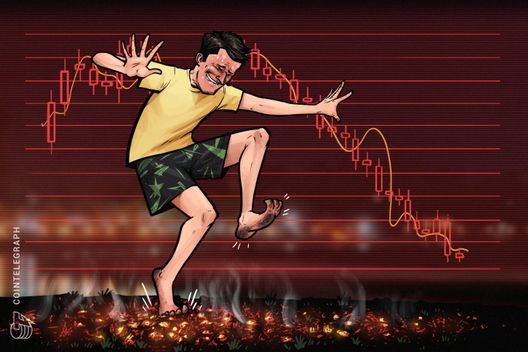 Almost all of the top one hundred cryptocurrencies by market cap have seen significant losses within the space of just a few hours today.

Almost all of the top one hundred cryptocurrencies by market cap have seen significant losses within the space of just a few hours today, June 22, as data from Coin360 shows. 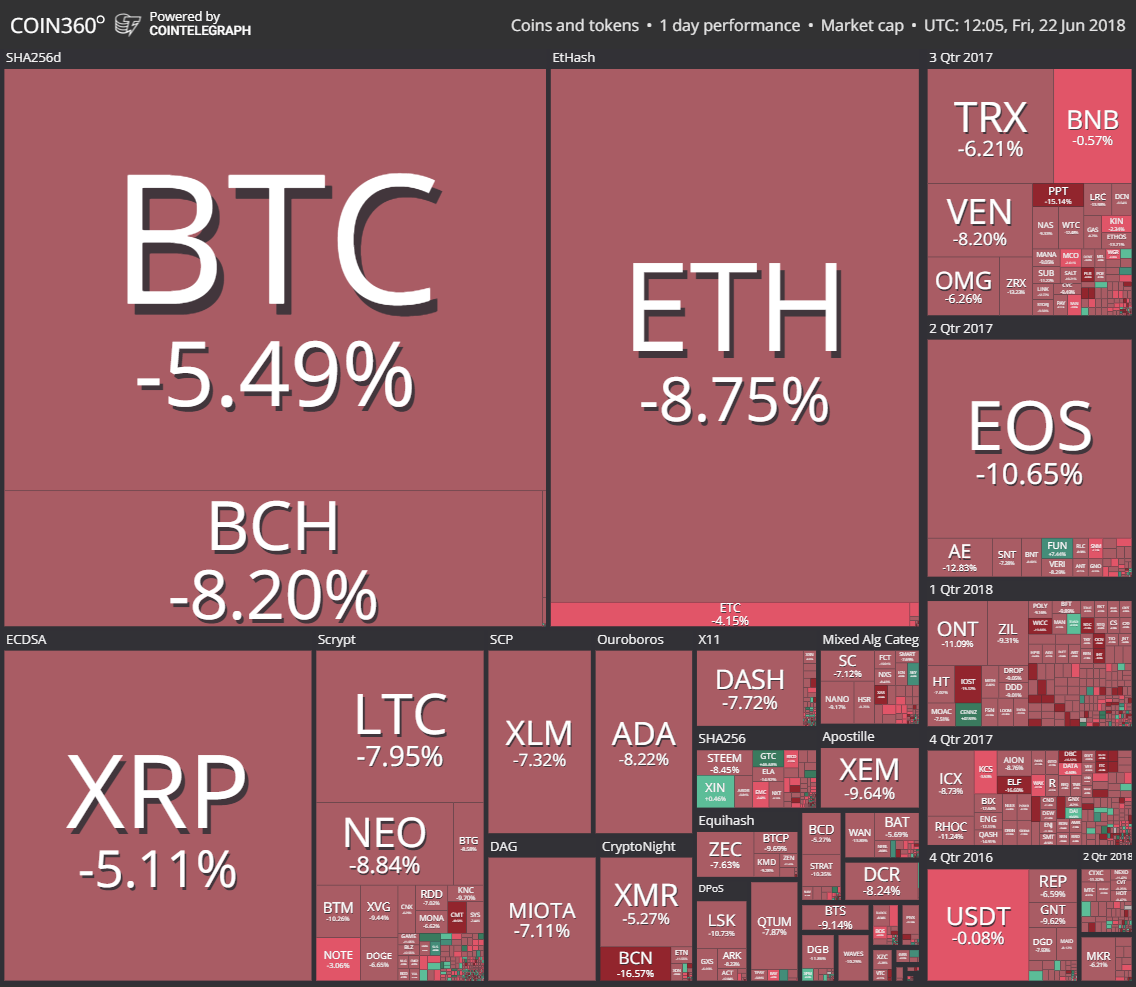 Total market capitalization of all cryptocurrencies has dropped to just under $268.4 billion at press time, dropping a hefty $16 billion on the day. 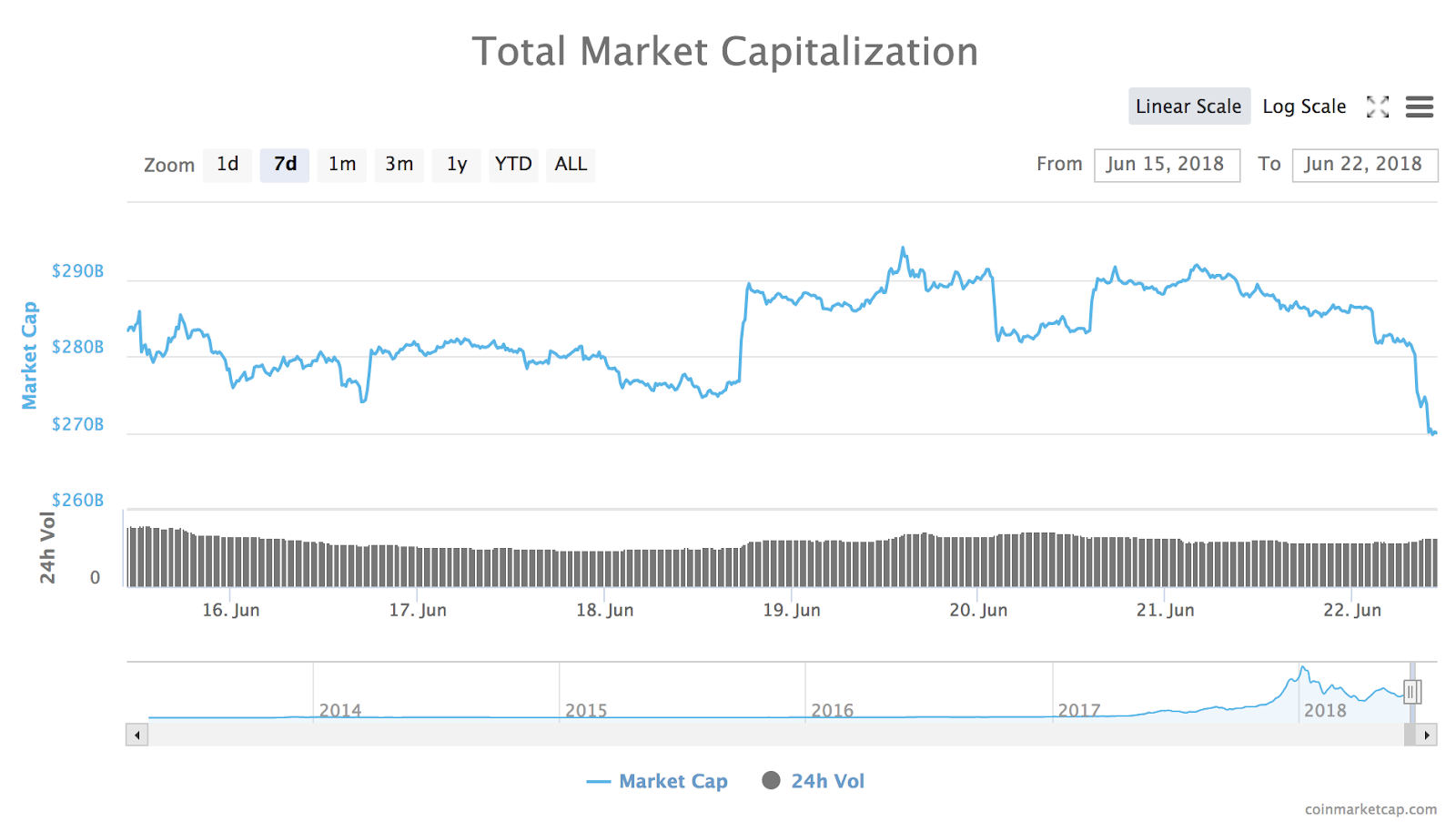 Bitcoin (BTC) is trading around $6,386 at press time, down 7.2 percent over the 24-hour period. The leading cryptocurrency has now reversed a flash three day rally, which saw its price recover to as high as $6,792 June 19. Ethereum (ETH) has been hit with an even harder loss over the past 24 hours, dropping 8.2 percent and trading around $492 to press time. The leading altcoin briefly recovered June 18-21 to reclaim the $520-540 range, but today again dipped below the round $500 figure and is trading only just slightly higher than its intra-weekly low of $485. All of the top ten cryptocurrencies by market cap have lost between 4 and around 10 percent over the 24-hour period, according to Coinmarketcap, with EOS dropping most sharply, trading at $9.45 to press time, down 10.08 percent.

In EOS a few complete strangers can freeze what users thought was their money. Under the EOS protocol you must trust a "constitutional" organization comprised of people you will likely never get to know. The EOS "constitution" is socially unscalable and a security hole. https://t.co/WusEqBMGBp

“Protecting” “punishing”. No. No one gets to decide those things. You are hair swapping 1 nation state for another one, albeit a digital one. This is the point of crypto, no one should have that power. If you do, then we should just stop wasting everyone’s time. https://t.co/yCh6IIPGqp

EOS’ tumbling fortunes this week could also be related to the fact that it is the top-traded altcoin on leading South Korean crypto exchange Bithumb, which suffered a $30 million theft when its hot wallet was hacked on the night of June 19. At the time of the hack, Bithumb was ranked sixth largest crypto exchange by trade volumes globally, but has now dropped to ninth place following news of the high-profile incident.

While the full details of the hack are still being clarified, Bithumb has said there will be “no damage” to its customers, yesterday confirming it will reimburse affected users. The exchange says it is working closely with the Korea Internet & Security Agency (KISA), the Korean Ministry of Science and Technology (MIC), the national police and others to investigate the theft, and says it will undertake “systematic measures” to prevent a repeat of the incident.

While news of a security breach on a major crypto trading platform can significantly undermine market confidence in the immediate term, analysts have this week been closely following the crypto markets with an eye on technical performance.

The president of Blue Line Futures has said that with Bitcoin’s rolling 30-day annualized volatility declining to 61 percent as compared with its peak of over 150 percent last year, the stats now indicate that “selling has become exhausted,” signalling that cryptocurrencies are likely in a bottoming process.

The traditional financial sector continues to closely follow developments in the crypto and blockchain space, with board director of the Swiss National Bank (SNB) Thomas Moser this week saying that cryptocurrencies and blockchain technology are still too rudimentary to consider issuing a state-backed digital currency, and that he cannot envision an “e-franc” anytime soon. Speaking at the Crypto Valley blockchain conference in Zug, the director admitted that blockchain technology has potential, but only when it “looks very different from what it does today.”

Leading U.S. investment banking group Goldman Sachs has this week revealed it is further exploring cryptocurrency trading derivatives, with Chief Operating Officer (COO) David Solomon stating that while the company is already assisting clients in publicly-traded derivatives such as Bitcoin futures, it is also “very cautiously” considering “some other activities” in the field.