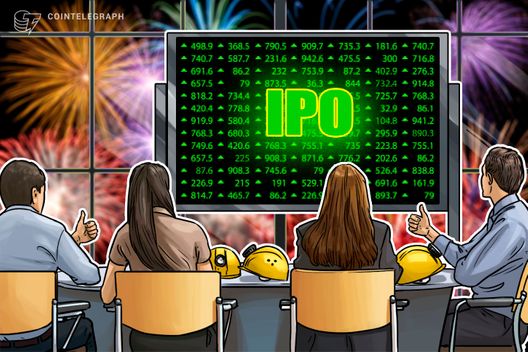 One of China’s largest Bitcoin mining hardware makers, Ebang Communication, has filed an application for an IPO with the Hong Kong Stock Exchange today.

Ebang Communication, one of the largest Bitcoin (BTC) mining hardware manufacturers in China, has filed an application for an initial public offering (IPO) with the Hong Kong Stock Exchange (HKEX) today, June 25.

The application confirms a Reuters report in May that the Zhejiang-based firm was working with advisers on a Hong Kong float, potentially seeking to raise as much as a staggering $1 billion to fund growth.

Today’s filing does not give details on how much Ebang is seeking to raise for its IPO, nor does it give a precise valuation for the firm.

However, the filing does include a financial statement which states that Ebang earned 925 million yuan ($141 million) in revenue in 2017 – an almost eighteen-fold increase from 2016.

The filing also suggested that the proportion of Ebang’s revenue generated solely from the sale of Bitcoin miners has significantly increased year-on-year, rising from 31 percent in 2015 to 42 percent in 2015, to 94.6 percent in 2017.

According to Ebang’s IPO application filing today, the firm is now in the process of working to release Bitcoin miners equipped with next generation 7nm semiconductor chips, which have already been in development by Japanese tech conglomerate GMO since 2017 and officially launched this spring.

Ebang competes alongside Bitmain and Canaan Creative for dominance in China’s lucrative  crypto mining hardware manufacturing industry. The latter released its own unaudited results this January that showed a 600-fold increase in its annual net income of 410 mln yuan ($62 mln) in 2017 – a figure nonetheless dwarfed by Bitmain, which reportedly made between $3 and $4 billion in operating profits that same year.

In May, Cointelegraph reported that Canaan Creative had confirmed plans to start trading its IPO on the Hong Kong Stock Exchange as early as July. Sources familiar with the matter told local media at the time that the company was also seeking to raise a whopping $1 billion.

This month, Bitmain’s CEO Jihan Wu revealed he is also “open” to conducting an overseas IPO as a means of allowing early backers of the firm to cash in funds.