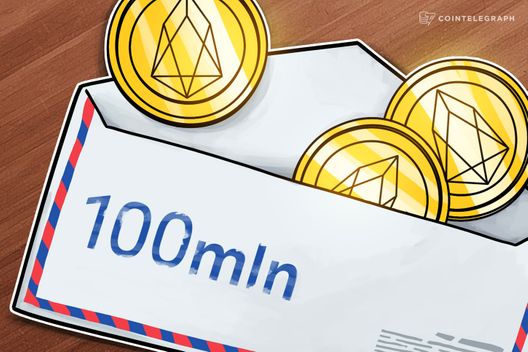 EOS creator Block.one has announced it will begin to stake its 100 mln token share to vote for the network’s ‘Block Producers,’ who validate transactions on the EOS blockchain.

EOS developer Block.one has announced it will begin to stake its share of tokens to vote for the network’s 21 ‘Block Producers’ (BPs), in an announcement posted yesterday, June 28.

In the EOS ecosystem, EOS holders can stake their tokens to vote for so-called ‘Block Producers’ (BPs) – the equivalent of miners on the Bitcoin (BTC) blockchain.

In keeping with the terms of EOS’ constitution, Block.one now plans to stake its own token share – which is 10% of the initial 1 billion EOS token allocation. According to  Block.one’s post:

“Block.one recognizes its responsibility to participate as an active minority voting member, [...] [and] will soon begin allocating votes to block producers that share the core values necessary to maximize the integrity and potential of the EOS public blockchain network.”

With Block.one now poised to wield its 100 million share, some commentators and community members are voicing concern that the developer will have excessive clout over who becomes a BP.

According to BP EOS Authority statistics, there are by now roughly 275 million tokens already staked on the network, out of the total 1 billion supply. Block.one’s stake will bring this figure to around 375 million – meaning it will be voting with almost a quarter of all staked tokens.

As more tokens are staked, Block.one’s influence will necessarily diminish – but in the interim, the news has disgruntled the likes of Dogecoin creator and crypto commentator Jackson Palmer, who tweeted his response today:

“So Block.one , who claimed to have no involvement in the launch of the #EOS mainnet are now going to use the 10% of the token supply they own to influence the list of block producers. Interesting.”

Since then, a furore over technical issues, account freezings, and arbitration matters has however clouded what had been a highly anticipated moment for the project, which raised a record-breaking $4 bln through its year-long token crowdsale.

This week, the controversies have led Block.one CTO Dan Larimer to go so far as to suggest rehauling the project’s entire constitution and recalibrating its structure of governance.