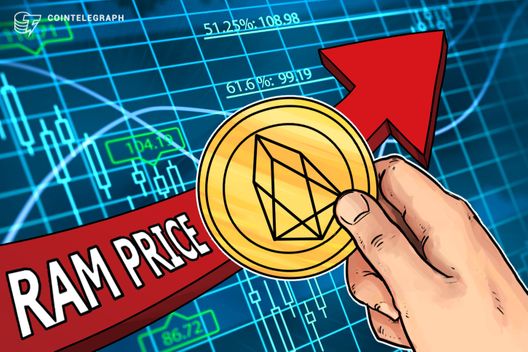 Prices for RAM on the EOS network skyrocketed this week, reaching as high as almost 920 EOS (around $8,160 to press time) per 1MB of RAM.

Prices for RAM on the EOS network have skyrocketed this week, reaching as high as almost 920 EOS (around $8,160 to press time) per 1MB of RAM, as data from MarketstackD.io indicates today, July 4.

EOS is a cryptocurrency token and an infrastructure for decentralized applications (DApps). As of press time it is the 5th largest coin at around $8 billion market capitalization, according to Coinmarketcap.

Although by today, prices have now lowered to around 480 EOS / 1MB RAM, the speculation frenzy could pose a real risk to the network’s intended function as an operating system for decentralized applications (DApps), by making it unfeasible for developers to purchase critical memory resources for their projects.

Back in May, EOS developer Block.one released an update to the EOSIO architecture for DApps, dubbed ‘Dawn 4.0,’ which moved to a new market-based RAM allocation model, alongside other improvements. At the time, CTO Dan Larimer rationalized the decision in a Medium post as being a way of financially incentivizing users to distribute their unused RAM by letting supply and demand govern the price.

Larimer did however concede at the time that this “may result in traders buying RAM today in anticipation of potential shortages tomorrow.”

This week’s frenzy - triggered by some EOS accounts hoarding and then trading their RAM at profitable spikes - prompted a “sudden revelation” for one reddit commentator, who suggested yesterday that:

“I suddenly realised that RAM is the true EOS token, at least for the next couple of years. If RAM supply is to grow at max 20% per annum as Dan [Larimer] suggested, then RAM supply is extremely limited for the foreseeable future. Remember, what the EOS token [is] for? It's not a cryptocurrency per se, but a token which you buy so as to CLAIM resources on the EOS network to run Dapps. However, [the] EOS token itself is not the resource. RAM is the resource.”

One way that a repeat of this week’s rapid market spiral could be prevented would be for the EOS ‘Block Producers’ (BPs) - the equivalent of miners on the Bitcoin (BTC) blockchain - to stake their tokens in a vote to decide to increase the total RAM supply on the network, thus decreasing scarcity.

Such a move could be controversial, however, in light of recent EOS events: fresh controversies over the balance of power between BPs, arbitrators and token-holders on EOS’ governed network have recently led Larimer to go so far as to suggest rehauling the project’s entire constitution and recalibrating its structure of governance.