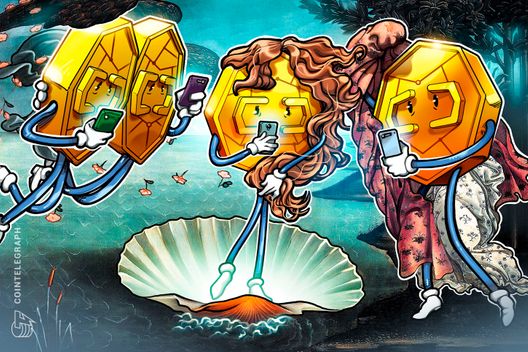 The Bank of Finland tries to paint cryptocurrencies as a “fallacy,” and Coinbase reaches out to institutional investors in this week’s crypto overview

Vitalik Buterin, the co-founder of Ethereum, said this week that he hopes centralized exchanges will “burn in hell” due to their ability to determine which cryptocurrencies “become big” by charging “these crazy ten to fifteen million dollar listing fees.” Buterin then referred to Ethereum’s decentralization by using the example that even if he was forced at gunpoint to hard fork ETH, only a few users would download and run the update: “[that] is called decentralization.”

A new report from the European Parliament states that since crypto will “remain with us for a while,” lawmakers shouldn’t ban or ignore the digital assets. The crypto-positive reports specifically mentions Nobel prize winning economist Robert Shiller, calling those who refer to crypto as a utopia or mania “mistaken.” The report notes that crypto global transaction network are “relatively safe, transparent, and fast,” although it does add that virtual currencies pose a problem to financial regulators due to their “anonymity and trans-border nature.”

Ben Delo, the 34-year-old Oxford graduate who founded BitMEX in 2014, has reportedly become Britain's youngest crypto billionaire. Delo told the Daily Mail this week that he prefers to give away his money to charities, following the frugal examples of Warren Buffett and Bill Gates. BitMEX is currently one of the largest crypto exchanges in the world with a daily transaction volume of around $2 billion.

A scathing report on cryptocurrencies released by the Bank of Finland this week attempts to explain why cryptocurrencies and digital ledger technology are “accounting systems for non-existent assets” and “unrelated to the fundamental characteristics of money.” The author then goes on to compare the desire to buy cryptocurrencies with the same “intangible value” as buying toys or firearms, noting that other reasons include criminal activities and security against “real or imagined” state oppression.

Herman Gref, the CEO of Russia’s Sberbank, said this week that he doesn’t see cryptocurrencies as becoming an alternative to fiat money. In Gref’s opinion, governments will not be “yielding their centralized role” in the creation of fiat currency.

“I can point out a lot of things on paper, but in reality, in the market place it doesn’t work. Communism on paper is perfect, we all know where that heads, right? And so I think we really need to still focus on building actual [crypto, blockchain] technology” — Ameer Rosic, serial entrepreneur and founder of BlockGeeks

“I do think it’s the first time I’ve ever heard someone thinking something could triple is a bearish comment,” — Tom Lee, Fundstrat, on the reaction to his Bitcoin price prediction of $22,000 (rather than $25,000) by year’s end

Malta’s Parliament has passed three bills into law that create a regulatory framework for digital ledger technology, like blockchain, “confirming Malta as the ‘blockchain island.” The three bills include the Malta Digital Innovation Authority Act, the Innovative Technological Arrangement and Services Act, and the Virtual Financial Asset Act.

The Reserve Bank of India’s ban on working with people or businesses associated with cryptocurrencies has come into effect this week, leading to Indian crypto exchanges like Zebpay to freeze all fiat deposits and withdrawals. Earlier this week, the Supreme Court had upheld the central bank’s ban, despite petitions for interim relief.

Three ministries in South Korea — the National Statistic Office, the Ministry of Science and Technology, and the Ministry of Information and Communication — are in the process of drafting major legislation for classification standards for the domestic blockchain industry by the end of July. The draft legislation so far defines cryptocurrency exchanges as crypto asset exchange and brokerage, changing the previous definition of them as “communication vendors.”

Uzbekistan’s president signed a decree this week for the development and integration of blockchain tech, crypto assets, and crypto mining in the state administration. Beginning on January 1, 2012, blockchain will be integrated into government activities like verifying identity information, corporate management systems, and transactions clearing.

The Japanese Financial Services Agency is reportedly looking into changing how to regulate cryptocurrency exchanges, which are currently regulated under the Payment Services Act. The financial regulator is considering regulating them instead under the Financial Instruments and Exchange Act, which would mean that the exchanges would have stronger customers protections.

SIX, Switzerland’s principal stock exchange, announced this week that it will open a “fully-regulated” cryptocurrency against using digital ledger technology next year. The “digital asset ecosystem,” called Six Digital Exchange,” was described by the SIX CEO as “the beginning of a new era for capital markets infrastructures.”

The UK’s Food Standard Agency has completed a blockchain tech pilot in a cattle slaughterhouse, using data to increase transparency in the food supply chain. The food regulator said that they will try to take the program to other plants, highlighting the need for blockchain implementation to take place as an industry-wide effort.

The U.S. Internal Revenue Service has launched a taskforce —  along with tax agencies from Australia, Canada, the Netherlands, and the United Kingdom — to cooperate on investigations into cybercrimes that threaten tax administrations. The impetus to form such a taskforce came from the Organization for Economic Co-operation and Development (OECD)’s call for countries to work harder against the enablers of tax crimes.

IBM has signed a five-year deal with the Australian government to use blockchain tech to improve their data security, sending IBM technologies like the aforementioned blockchain, automation, and AI to Australian federal departments. The head of IBM’s Asia Pacific division said that the partnership will help bring Australia to a “paperless future.”

European blockchain trading platform we.trade, which uses IBM’s Hyperledger Fabric-powered Blockchain Platform, has completed its first live trades via five major banks and with twenty companies. According to the Dutch Rabobank, which took part in the trades, the banks’ collaboration show a “great example” of traditional finance keeping up with innovation.

The crypto markets are slowly creeping up this week, with Bitcoin at and Ethereum. Total market cap is at by press time.

Malware attacks posing as administrators of Slack and Discord crypto-related groups in order to infect crypto-enthusiast users’ computers with malicious binaries have been discovered this week. According to one security researcher, the malware is “dumb” due to the large size of its binary, limited capabilities, and “finally, the malware saves the user’s password to dumpdummy.”

Sources have reported that a type of malware that hijacks Windows clipboard to swap out Bitcoin addresses is monitoring 2.3 million targets. The malware works by replacing the Bitcoin address of a user with the address of the attacker, thus having them inadvertently send their own coins to the hackers.

The head of the Bank of International Settlements said in an article this week that Bitcoin “cannot assume the functions of money.” He went on to caution “young people” against trying to “create money” in regards to Bitcoin mining, noting that although the miners have the “biggest incentive” in the system,” what they do is not compatible with the “usefulness of money.”

Youtube has been added as a defendant in the January class action lawsuit, filed through law firm Silver Miller, against crypto investment platform BitConnect for their alleged issuance of unregistered securities and operations as a Ponzi scheme. The lawsuit alleges that YouTube failed to remove BitConnect videos that illegally promoted their fraudulent investment scheme. According to the legal documents, the top ten BitConnect YouTube affiliates posted more than 70,000 hours of unedited content, generating 58 million views.

An official from the Indian National Congress, an opposition party, has asked for a probe into a cryptocurrency scam allegedly involving the leaders of the majority Bharatiya Janata Party (BJP). The opposition official claims that BJP officials were using Bitcoin as a “cover up” for money laundering and extortion in the amount of an estimated $723 million.

Tom Lee of Fundstrat said in two interviews this week that Bitcoin’s price could be trading anywhere between $22,000 and $25,000 by the end of the year. Lee had previously predicted a price point of $25,000, but he clarified that this $22,000 number was not a retreat from the previous forecast.

Here’s Some Cryptocurrency. Now Please Use It.

The New York Times asks the all-important question of what exactly can be be done with cryptocurrencies once you have them, using Ripple’s XRP as an example case. The article details how Ripple is trying to bring XRP use to the mainstream, not just through trials with financial companies, but also with larger publicity stunts like Ashton Kutcher and Stephen Colbert donating large amounts of XRP on live TV to various causes.