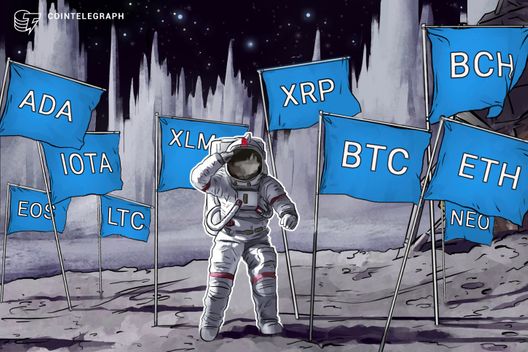 Cryptocurrencies are bouncing off their lows even despite immense pressure from China and India. Which coins are confirming a bottom?

The lack of mass adoption in daily use has led many critics to question the future outlook of cryptocurrencies. However, researchers at Imperial College London have said that within the next decade, digital currencies will be used as a payment method for goods and services.

In just a little over eight years, cryptocurrencies, led by Bitcoin, have gained a huge following and have become a new asset class for investing. All this has been achieved in spite of various hurdles by governments and central banks.

China’s central bank has boasted that it has reduced Bitcoin trading in Chinese currency, renminbi (RMB) from above 90 percent to just 1 percent of the world’s total. India has also banned banks from doing business with crypto exchanges. These two governments have made it infeasible to trade in virtual currencies for about 35 percent of the globe’s population. Despite that, the crypto markets are bouncing off their lows.

We believe that most of the top cryptocurrencies by market capitalization have either bottomed out or are very close to their bottoms. Though we don’t expect a blistering rally from these levels, we anticipate most to start a new uptrend within the next few months.

So, which ones are confirming a bottom?

Bitcoin is leading from the front. It has been sustaining above the 20-day EMA for the past seven days. For the past two days, it has been consolidating near the overhead resistance of $6,953.38.

A breakout above $7,000 increases the probability of a rally to $7,750, where the BTC/USD pair will face strong selling pressure from the downtrend line and the horizontal resistance.

Once this level is crossed convincingly, a rally to $10,000 should be on the cards.

If the bears reverse direction from the current levels, the virtual currency can form a probable right shoulder of a developing inverted head and shoulders (H&S) pattern as long as the dip remains above $6,250.

We recommend to hold the long positions initiated at $6,650. Our bullish view will be invalidated if the cryptocurrency breaks below $5,900.

Though Ethereum broke above the intraday highs of July 3, the bulls could not sustain the momentum. The digital currency turned down from $496.36 on July 8 without filling our buy recommendation at $500.

Therefore, we retain the buy recommendation provided in the previous analysis.

Conversely, if the bears break below the 20-day EMA, the virtual currency might remain range bound between $450 and $500 for a few days.

Ripple is not attracting buyers even at these levels. It has failed to break out of the downtrend line and reach the 20-day EMA in the past three days.

The only consolation is that it has not broken down of $0.45. Once the bulls sustain above the 20-day EMA, we anticipate a rally to $0.56, which should offer a stiff resistance.

The probability of a double bottom formation will increase once the XRP/USD pair sustains above $0.56. On the contrary, if the coin plummets below $0.4242, it will become very negative. We didn’t find any buy setups on the pair at the moment.

Bitcoin Cash is finding buying support in the zone of $700-$736. However, the buying dries up at higher levels, and due to that the bulls have failed to break out of the 20-day EMA.

Therefore, the traders can buy if the bulls sustain above $850 for 4 hours. The initial stop can be placed at $650. It can be raised to break even if the digital currency struggles to break out of $934.

EOS continues to trade inside a very tight range. On the downside, the bulls are offering support at $8.4840, whereas on the upside the bears are defending the 20-day EMA.

Historically, such tight ranges culminate in a strong uptrend for the EOS/USD pair (marked as ellipse on the chart). So, we expect a similar move this time if the breakout is to the upside.

Our bullish view will be invalidated if the digital currency plunges from the current levels instead of breaking out of the downtrend line.

Litecoin broke above the descending channel on July 7 but failed to scale above the 20-day EMA. This shows a lack of buying power even at these levels.

We anticipate the LTC/USD pair to go through a base building process for a few weeks, after which a new uptrend will start.

Our view will be invalidated if the bears sink the digital currency below the June 29 low of $74.074. At present, there are no buy setups, hence, we suggest to remain on the sidelines.

The bulls have been providing support at the $0.13 level but have failed to push Cardano above the 20-day EMA.

Our view of a range bound trading will be invalidated if the bears force a break below the support zone of $0.13-$0.111843. We shall propose a trade once we see a decisive move to the upside.

Stellar has been consolidating for the past seven days. The bulls are proving support around the $0.2 mark, whereas the bears are defending the $0.22221741 line. This tight range is unlikely to sustain for long.

The XLM/USD pair will become negative if the bears break below the $0.184 levels. The risk to reward ratio is attractive, hence, the traders can enter long positions on a close above $0.225 and keep a stop below the intraday lows of June 29.

Our trade on IOTA is in the red. For the past two days, the bulls have been struggling to scale above the 20-day EMA, which is a negative sign. Though the coin is finding support at the $1 mark, a failure to move up within the next couple of days increases the chance of a breakdown.

The 20-day EMA has flattened out, which shows that the momentum on the downside has abated. The IOTA/USD pair will gain strength if it sustains above the $1.26 levels.

On the downside, if the $1 level breaks, a retest of $0.9150 is likely. We suggest holding the current positions with the stops just below the June 24 lows. We shall trail the stops higher at the first available opportunity.

NEO dipped below the downtrend line on July 6 but found support at the 20-day EMA. The bulls are attempting to defend the support zone between $35.38-$37.97, the two being 61.8 percent and 50 percent retracement levels of the rally from the recent lows.

If the NEO/USD pair sustains above $41, a retest of the July 4 high of $48.9 is probable. The bears might offer a stiff resistance at $43.56, but we expect this level to be crossed.

On the downside, any break of the $35 levels will increase the likelihood of a fall to $30. The gradually rising 20-day EMA points to a possible change in trend.