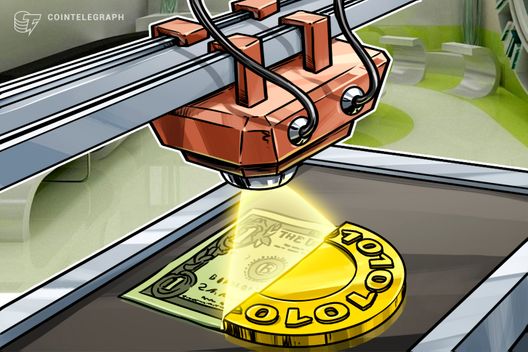 IBM has backed a new project for a U.S. dollar-pegged stablecoin that runs on the Stellar blockchain network.

A new project for a U.S. dollar-pegged stablecoin that runs on the Stellar blockchain network has received backing from IBM, Reuters reports July 17.

The new asset is dubbed ‘Stronghold USD’ after its creator, fintech startup Stronghold. The token launched today, and is reportedly issued using a 1:1 price ratio with the U.S. dollar. It is the first ever stable-value crypto project to use the Stellar network, as Fortune notes.

IBM has been using the Stellar network to facilitate cross-border payments since 2017, and is said to have now begun testing the new stablecoin. Jesse Lund, IBM’s vice president of global blockchain, told Reuters that:

Van Kralingen said that until now, IBM has been converting between different fiat currencies using Stellar’s native token, Lumens (XLM) as a bridge between them. The existing system is thus doubly exposed to both variable intra-fiat exchange rates and the notorious volatility of the cryptocurrency markets - to which Lumens, unlike a stablecoin, remains subjected.

A stablecoin, used as frictionless, digital proxy for fiat, could eliminate both variables and potentially “play a very big role in improving costs,” she said.

Van Kralingen said that stablecoin projects pegged to national fiat currencies other than the U.S. dollar would also be of value for IBM’s blockchain integration.

IBM has also today reportedly partnered with Columbia University to open the Columbia-IBM Center for Blockchain and Transparency, which will offer students IBM internships and joint research opportunities.

Stablecoins have been gaining increasing traction with crypto and blockchain industry figures, with Jeremy Allaire, co-founder & CEO of Circle, envisioning them as an integral component of an emerging “tokenized global economy” at MoneyConf in Dublin last month.

This spring, Circle closed a $110 million fundraising round to partner with crypto mining hardware manufacturer Bitmain on the development of its own U.S. dollar-backed stable coin.

Tether (USDT) remains one of the most famous, if controversial, examples of a fiat-stabilized cryptocurrency. Others in the industry are looking to different means by which to forge a coin that would be immunized from market volatility.

Last month, Cointelegraph reported on a project for a stabilized token dubbed ‘Reserve’ that maintains a peg by using a smart contract to lock up other crypto assets, rather than fiat. The initiative has received backing from the likes of PayPal co-founder Peter Thiel and major U.S. crypto exchange Coinbase.