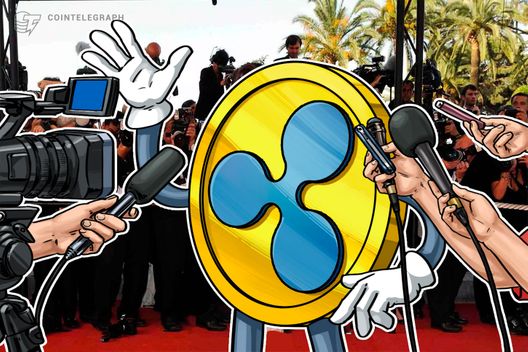 In a recent report, Ripple points out that XRP’s decline is in line with the general trend in crypto markets in Q2, which purportedly highlights its independence from Ripple.

Ripple has released the second quarter 2018 report for its digital asset XRP today, July 24. According to the report, Ripple’s sales of XRP tokens were a “drop in the bucket” compared to the total XRP market.

Per the report, Ripple sold $75.53 million in Q2 in total. Of this amount, the company sold $56.66 million via programmatic sales, which amounted to 0.125 percent of Ripple’s $45.35 billion in sales during the whole second quarter. 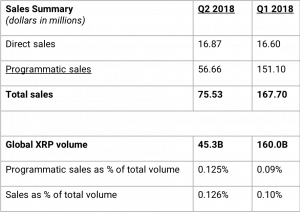 The report stressed the low volatility of XRP in Q2, pointing out a 9.0 percent price decline in line with Bitcoin’s 8.2 percent drop.

In Q4 2017, Ripple placed 55 billion XRP in an encrypted escrow account, meaning that the company can only access 13 percent of total XRP in circulation. Ripple noted that the 300 million XRP remaining out of escrow has been used to support the XRP ecosystem.

The report also mentioned some new participants to the XRP ecosystem in Q2, including micropayment application Coil, and content monetization platform SB Projects. Ripple noted that both new entrants are supported by Ripple’s venture initiative Xpring, which is responsible for partnerships with companies and projects “run by proven entrepreneurs.”

Regarding the overall market in Q2, Ripple emphasized XRP’s independence from Ripple itself. The report notes that the XRP token price decline was in line with the overall trend in crypto markets, pointing at the drop of total market cap of all cryptocurrencies from $603.7 billion in January 2018 to $254.7 billion by mid-year. The report notes that Ripple had its best quarter ever in Q2 in terms of customers signed:

"It’s also important to note that despite Ripple having its best quarter ever in Q2 — in terms of customers signed — XRP’s price continued to decline with those of other digital assets, underscoring XRP’s independence from Ripple."

The third largest cryptocurrency by market capitalization, XRP touched its all-time high of $3.81 on Jan. 4, 2018. At press time, the token is trading at $0.46, falling almost 10 percent over the past week, according to Cointelegraph’s XRP price index. 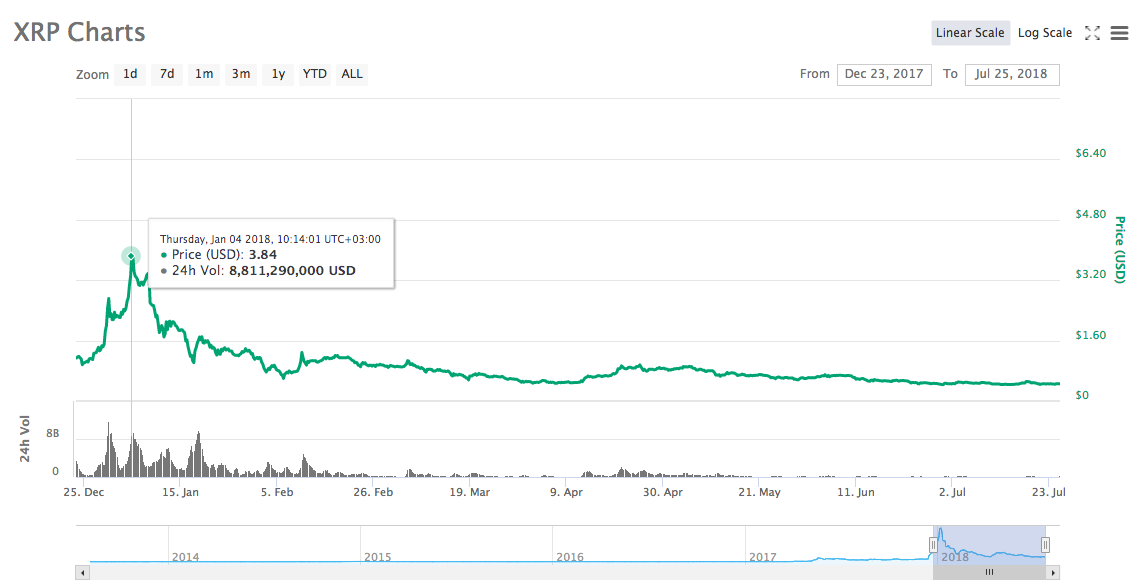