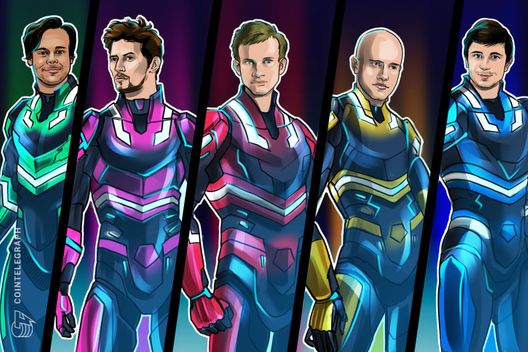 Five prominent individuals in the cryptocurrency space have been named in Fortune’s 40 under 40 — putting crypto among the world’s business leaders.

The world of finance is driven by some of the greatest minds out there, but every year we see new faces pop up on the list of the industry’s most influential.

This month, Fortune released their list of ‘40 under 40,’ a compendium of the most influential figures in the global business space.

The usual suspects featured in this awe-inspiring group include Instagram’s co-founder and CEO Kevin Systrom, Facebook CEO Mark Zuckerberg and AirBNB co-founder Brian Chesky, to name but a few.

The list also features prominent leaders of some of the world’s biggest enterprises, such as Dhivya Suryadevara, who is the chief financial officer of General Motors. New Zealand’s prime minister, Jacinda Ardern, is also a notable inclusion, highlighting the diverse makeup of figures under the age of 40 making a difference in the world.

This does not exclude the expanding influence that cryptocurrencies are having around the world.

Not one, but five prominent names from the crypto world graced this auspicious list of influencers, and their work in the space has clearly exceeded the bounds of blockchain technology and cryptocurrencies.

Ethereum inventor Vitalik Buterin, Coinbase founder Brian Armstrong, Telegram founder Pavel Durov and Robinhood co-founders Baiju Bhatt and Vlad Tenev cracked the nod, and here’s a look at their respective journeys into the world of cryptocurrency and the effect they are now having on a global scale.

Other accolades: Forbes’ Richest in Cryptocurrency, Forbes’ 30 Under 30

Vitalik Buterin is one of the most prominent figures in the cryptocurrency industry. It is at just 24 years old that he invented Ethereum, which has become the second largest cryptocurrency in the world by market volume.

While Bitcoin still reigns supreme as both the most widely used and most valuable cryptocurrency in the world, Ethereum has emerged as a leader in its own right — a blockchain platform that allows the development of decentralized applications.

Buterin’s journey into the world of cryptocurrency could be attributed to his upbringing — with his father, Dmitry Buterin, a computer programmer, credited with introducing Vitalik to Bitcoin when he was 17.

Having taken an interest in the subject, Buterin began writing about Bitcoin for online blogs before he eventually got the opportunity to launch Bitcoin Magazine alongside Mihai Alisie in 2011.

According to Wired, a trip to a cryptocurrency conference in 2013 — organized by the Winklevoss twins — provided the impetus for Buterin to explore the possibility of creating a blockchain platform that answered the many layers people were trying to build on top of Bitcoin.

Buterin told the publication that the situation needed to be rectified in a different way:

“I discovered that they were doing this sort of Swiss Army knife-approach of supporting 15 different features and doing it in a very limited way.”

Buterin then spent six months travelling around the world, picking the brains of people doing their utmost to improve on Bitcoin’s capabilities. Once he’d completed his research, Buterin returned home and wrote the Ethereum white paper, which was published at the end of 2013.

As Buterin told Wired, the community reacted in a way he had not anticipated.

“When I came up with Ethereum, my first first thought was, okay this thing is too good to be true and I’m going to have five professional cryptographers raining down on me and telling me how stupid I am for not seeing a bunch of very obvious flaws. Two weeks later, I was extremely surprised that none of that happened. As it turned out, the core Ethereum idea was good, fundamentally, completely, sound.”

While it hasn’t been smooth sailing, Ethereum has become a revolutionary blockchain platform in its own right, going far and beyond the mainly transactional capabilities of Bitcoin.

The platform is now maintained by the Ethereum Foundation, while Buterin heads up the research team that is actively involved in the maintenance and the development of the future of the platform.

Other accolades: Forbes’ Richest in Cryptocurrency

At 35-years-old, Brian Armstrong has also made waves in the cryptocurrency industry and the broader financial industry as a result.

Armstrong served as an intern at IBM in 2003, before working as an enterprise risk management consultant at Deloitte. From 2003 to 2012, he founded and acted as CEO of University Tutor — a platform that links students with tutors in their area.

In 2011, Armstrong joined AirBNB as a software engineer and, a year later, in June 2012, he founded Coinbase. From its humble beginnings in 2012, Coinbase now has a global user base of over 20 million people and has facilitated $150 billion worth of cryptocurrency trades.

Hailed as the biggest cryptocurrency exchange in America and one of the most well-known in the world, Armstrong is directly responsible for millions of people being introduced to cryptocurrencies.

His company has since been labelled a ‘unicorn’ of the crypto industry, having raised $100 million in series D funding in August 2017 and being valued at around $1.6 billion.

Durov was effectively forced out of VK’s management in 2014, due to ownership issues and pressures from the Russian government to submit user data and control content. He’d previously sold a 12 percent stake in VK for an estimated $300 million — that gave Russian internet company Mail.ru a majority ownership of the company.

That led to Durov not only leaving the company, but departing Russia with ‘no plans to return.’ However, it also provided him the freedom to develop Telegram. The free-to-use, privacy-focused messaging application has exploded, with over 200 million users as of March 2018. It was the first messaging app to have end-to-end encryption when it was launched in 2013.

Durov’s application has revolutionized the messaging app space due to its commitment to privacy for its users. This hasn’t gone over well with some of the world’s biggest countries — with Iran, China and Russia making moves to block the app within their borders.

Durov has gone as far as to incentivize internet service providers in his Telegram channel to work around these bans by setting up Bitcoin grants as a reward for setting up virtual private networks (VPNs) to keep users connected.

That hasn’t stopped Telegram’s emphatic growth, and interest in the platform has grown exponentially since plans to launch the Telegram Open Network (TON) came to light in early 2018.

Two rounds of a private ICO — that was registered with the U.S. Securities and Exchange Commision — raised $850 million each, netting a whopping $1.7 billion.

Durov has become an important figure in fighting against pervasive government policies, and he’s leading the way in providing a platform where people can communicate freely, with the knowledge that their everyday conversations are safe from surveillance — by governments or nefarious organizations.

In a post in March 2018, Durov reaffirmed Telegram’s promise to its users to never compromise their privacy, given that the company is not beholden to shareholders, advertisers, governments or global institutions:

“Above all, we at Telegram believe in people. We believe that humans are inherently intelligent and benevolent beings that deserve to be trusted; trusted with freedom to share their thoughts, freedom to communicate privately, freedom to create tools. This philosophy defines everything we do.”

Net worth: $1 billion each (source)

This duo is being lumped together for the pure fact that they’re responsible for launching Robinhood, a zero-fee stock trading app.

Bhatt and Tenev founded Robinhood in 2012, whose flagship offering was zero-fee trading on traditional stock markets.

“We’re planning to operate this business on break-even basics and we don’t plan to profit from it for the foreseeable future. The value of Robinhood Crypto is in growing our customer base and better serving our existing customers.”

Nevertheless, Robinhood has definitely made its mark on the cryptocurrency exchange space, muscling its way into the industry and challenging the conventional trading fees charged by most other exchanges.

Their exploits have been met with plenty of support from investors in the cryptocurrency industry. A series D fundraising round netted $363 million to further the expansion of the Robinhood Crypto trading platform around the U.S. The company is valued at over $5.6 billion — making it the second most valuable tech startup in the country, only after Stripe — according to Fortune.

“We plan on continuing to offer these services for free. There’s no real scenario where we would change that at all. I think we’re pretty relentlessly focused on our mission of making the markets and the financial services system more accessible to the broader population, and that’s a pretty good North Star for us.”

These five figures have left indelible marks on the cryptocurrency space for widely different reasons. However, their collective efforts have put them among an elite list of business leaders from around the world.

Their technological prowess, coupled with innovative ideas and progressive ideologies, highlight the power and potential of blockchain technology and cryptocurrencies.

They have also blazed a trail for others to follow, challenging young creative minds to think of new ways to innovate and change the world — from finance to politics.

The prominence of cryptocurrencies has even led to Forbes creating its very own Richest in Cryptocurrency list. Among the names mentioned, it includes Binance CEO and founder Changpeng Zhao, Bitcoin foundation chairman Brock Pierce, as well as Armstrong and Buterin.

It won’t be surprising to see more cryptocurrency and blockchain figures feature among these mainstream benchmarks in the years to come.