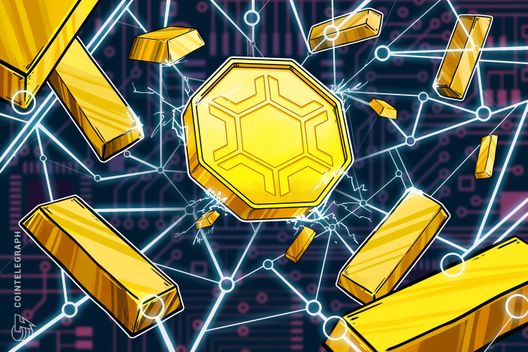 A blockchain-based platform is creating a cryptocurrency pegged by gold, with plans to branch out into other precious metals in the coming years.

A company is creating an ecosystem where tangible assets such as gold can be traded for virtual currencies in a digital environment.

The platform, known as the Digital Gold Exchange (DGE for short,) says it has the goal of establishing a place where users can securely store their assets and trade with others “quickly, safely, and without intermediary intervention.”

It is designing a blockchain-based ecosystem which it hopes will allow individuals and companies to join – trading without borders wherever they are in the world.

Although gold is going to be a primary focus for the platform, DGE’s white paper says the company eventually plans to expand to other precious metals including diamonds, platinum and white gold. The company aims to make changing gold into tokens a fast experience, with conversion rates that are based on the official market prices listed on gold exchanges in South Korea and around the world.

According to DGE, one particular focus has been developing a trade system that is easy to understand, well designed and not too dissimilar from the payment processing systems commonly used on e-commerce sites – making its platform accessible and usable for customers from a range of age groups.

Digital Gold Exchange says it has established partnerships with recognizable brands – and these agreements will result in a “stable and reliable ecosystem.”

According to the company, its first exclusive contract was signed in February with the Korea Gold Exchange 3M,  the country’s largest gold merchant.

In March, an agreement was reached with Happy Money, a brand whose gift cards can be used to make purchases on more than 500 brands in Korea. Under this deal, users will be able to exchange coins for these vouchers, which are accepted in book stores, restaurants, cinemas, music shops, coffee houses elsewhere.

The team behind the project says it is optimistic that these partnerships will continue to increase over the coming months.

The elements of the ecosystem

DGE says there are three main elements to its project. The first is a utility token known as TMTG, which stands for The Midas Touch Gold.

Although this token is not pegged to tangible assets such as gold, it can be used for purchasing other cryptocurrencies on the Digital Gold Exchange.

The ecosystem is also going to offer another token known as MDG. This can be bought on the DGE using TMGT tokens and is only tradable on this platform. Pegged to 1g of gold as a certificate, it can be traded to real gold at any time.

Finally, the platform tying these two tokens together is the Digital Gold Exchange, with a white paper describing it as having a “pivotal role in the ecosystem.”

A presale for its tokens was held in three stages throughout May and June, and this was followed by an initial coin offering which ran from July 10-25.

The company is aiming for its tokens to be listed on a number of coin exchanges over the coming months, beginning with IDCM on August 1 and Coinsuper Exchange on August 16. By February 2019, it is hoped that diamond trading will also commence.

DGE claims that its offering stands out from other forms of virtual money because its tokens “could bring value to the everyday lives of many people,” unlike firms that have launched cryptocurrencies without actually considering what they should be used for.