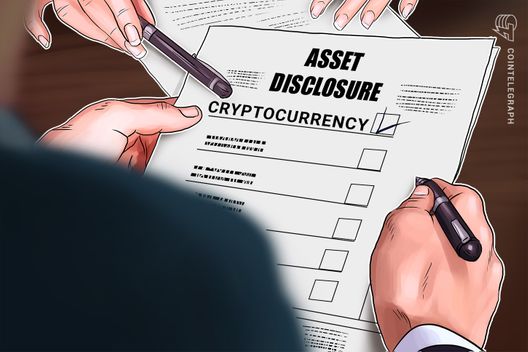 The chair of the House Judiciary Committee Bob Goodlatte has reported in his annual Financial Disclosure Statement that he owns digital currency.

The chair of the Judiciary Committee of the U.S. House of Representatives may be the first member of Congress to disclose that he owns cryptocurrency, Sludge reports Aug. 6.

Congressman Bob Goodlatte (R-VA) reported that he owns between $17,000 and $80,000 in digital currency in his annual Financial Disclosure Statement. Goodlatte filed the statement on May 10, a month before the U.S. Ethics Committee issued new rules about disclosing digital currency holdings.

Per the new rules, all House Members must disclose their own and their spouse’s crypto holdings valued over $1,000, and report over $1,000 worth of crypto transactions within 45 days. According to the statement, the Congressman has principally invested in Bitcoin (BTC), with some holdings in major altcoins Ethereum (ETH) and Bitcoin Cash (BCH).

Goodlatte’s son, Bobby Goodlatte Jr., is reportedly an angel investor in San-Francisco-based crypto exchange Coinbase, however it is unclear when and how much he invested in the company.

For some lawmakers in the U.S. Congress, cryptocurrencies are an object of suspicion or outright derision. At a hearing this spring, Representative Sherman of California went so far as to call cryptocurrency “a crock” adding that they can only serve to “help terrorists and criminals move money around the world.”

While some regulators and lawmakers have called for tightening regulations on digital currencies, there are several members of Congress who are proponents for the industry. Bitcoin-friendly Congressman Jared Polis is known for the establishment of the Congressional Blockchain Caucus, a group that aims to further expand blockchain technology and promotes a laissez faire regulatory approach.

Senator Mark Warner earned a reputation as a crypto-bull in forecasting the market’s capitalization to exceed $20 trillion by 2020. “I was an early investor in cell phones back in the '80s, and I believe blockchain has the potential to be just as transformational as cell phones. As our government begins to look at crypto, I don't think you can separate cryptocurrencies from the technology they're based on,” he said.