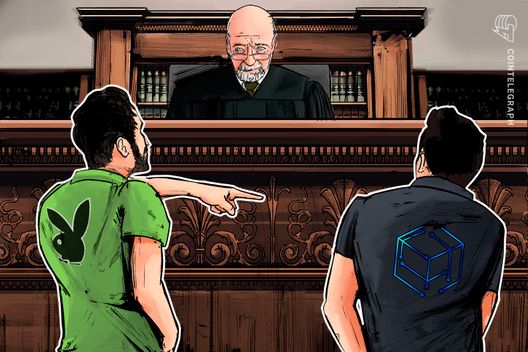 Regardless of the court’s decision, VIT network creation could still become an important precedent, if it is to happen.

As the Los Angeles Times reported on Aug. 14, Playboy — one of the pioneers in global erotica — is suing the Canadian firm Global Blockchain Technologies (BLOC), claiming that it failed to integrate blockchain technology into Playboy’s online media channels.

Playboy Enterprises has filed a lawsuit in the Los Angeles County Superior Court, and the accusations include fraud and breach of contract, which the two companies drew up in March. BLOC representatives dismissed the lawsuit as a “normal dispute” between the two businesses, rejected the charge of fraud as “frivolous” and claimed it has “a strong defence to the action.”

The blockchains system that BLOC has failed to implement in Playboy’s sites is the Vice Industry Token — a promising token reward concept with a mission to create the network of affiliates, of whom PlayboyTV is with a little doubt the most renowned one. Now, the Vice Industry Token blames Playboy for taking ‘‘the equivalent of millions of dollars’’ and giving absolutely nothing.

Despite focusing on adult content, Vice Industry Token’s ambitions are far larger — its main page also mentions the cannabis and gambling industries, somehow promising a brand new tool to consume goods and services which are often inaccessible “in developing countries” due to the moral reasons. As the VIT statement goes:

“Our goal is to level the playing field internationally and make all sorts of content not currently available outside of developed countries available to anyone from any country anytime and anyplace.”

VIT raised $22 million in Ethereum in the first 24 hours of its Initial Coin Offering (ICO). Now it stands at the rank of 760 on Coinmarketcap, with its market cap priced at $1.36 million (by the press time).

Global Blockchain Technologies, a Vancouver-based company that specializes in collaboration with existing businesses to build blockchain applications and cryptocurrencies base, announced its partnership with the Playboy Enterprise on May 31. Back then, BLOC chairman Steven Nerayoff said:

“As one of the earliest adopters of blockchain technology, this is a thrilling project to be part of. Most cryptocurrencies fail because they are unable to match up with a real-world use case, which resigns them to a fate of being nothing more than an experiment of speculation and baseless hype-building. In this situation, Playboy specifically benefits from having a cryptocurrency like VIT on its side. [...] For VIT, being part of Playboy is a huge step in real-world cryptocurrency use that will translate to success.”

Playboy.TV was expected to be the first of the company’s platforms to feature the new wallet, which would enable the online platform to accept VIT and other cryptocurrency tokens.

The third side of the conflict

On Aug. 15, adult news outlet AVN reported that the Vice Industry Token, as a company, plans to seek restitution of its own after “purportedly losing millions of crypto tokens in a crumbling deal between Playboy Enterprises and Canadian-based Global Blockchain Technologies.” The blockchain company is strategizing with lawyers to take action within the coming week for remuneration of its losses. As VIT CEO Stuart Duncan told AVN:

“I've read the complaint that Playboy has with Global Blockchain, and I'm really disappointed in Playboy. because we gave them millions and millions and millions of tokens, [and] they've never reached out to us once to try and get anything tokenized with their website[...] It makes me think that maybe we've got a case for a lawsuit against them, because they've taken the equivalent of millions of dollars from us, and we've received absolutely nothing and no benefit from it whatsoever.”

Duncan called himself “the collateral damage in this thing,” and stated that he doesn’t know the details of agreement between Playboy and BLOC. VIT’s CEO also specified that it is solely Playboy he’s planning to sue in the first place:

“I will be doing something, I just don't know what it is I'll be doing yet. If those two companies can't resolve their problems and fix things with me, Playboy's going to have a big problem.”

Cointelegraph have contacted Scott Duncan to clarify the aspects of VIT’s relationship with the Playboy Enterprise. We hope to get back with more details in our next piece on the subject. The reason why VIT’s — a blockchain company itself — site should have been rebranded by a blockchain contractor of Playboy remains a serious question.

“History has proven that the adult entertainment industry plays a critical role in adoption for innovative technology. We saw that with VHS, Beta Max, credit card payment icons and, most recently, VR goggles. We expect to see widespread adoption of crypto and blockchain in short order.”

Apart from that, the adult entertainment industry can’t impress with a major involvement into the crypto. Pornhub also started to accept Tron and ZenCash, while there is a number of other adult sites that accept Bitcoin and altcoins as a payment method — Naughty America and Chaturbate among them. There’s also a number of ICOs that are claiming to provide the solutions for the different branches of the industry, but the Vice Industry Token remains the first and last project initiated by the big and well-renowned adult enterprise. And regardless of the Los Angeles Supreme Court’s decision, the creation of the VIT network could still become an important precedent, if it is to happen.