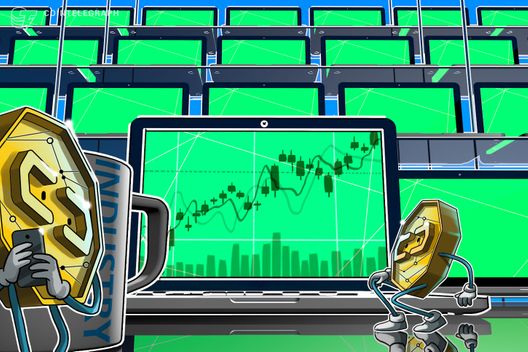 Following the mid-week’s upswing, the crypto markets saw widespread corrections, but most cryptocurrencies are today consolidating these higher lows.

Friday, August 30: following the mid-week’s strong upswing, the crypto markets subsequently saw widespread corrections, but most cryptocurrencies are today consolidating these higher lows. The vast majority of cryptos are in the green, as Coin360 data shows. 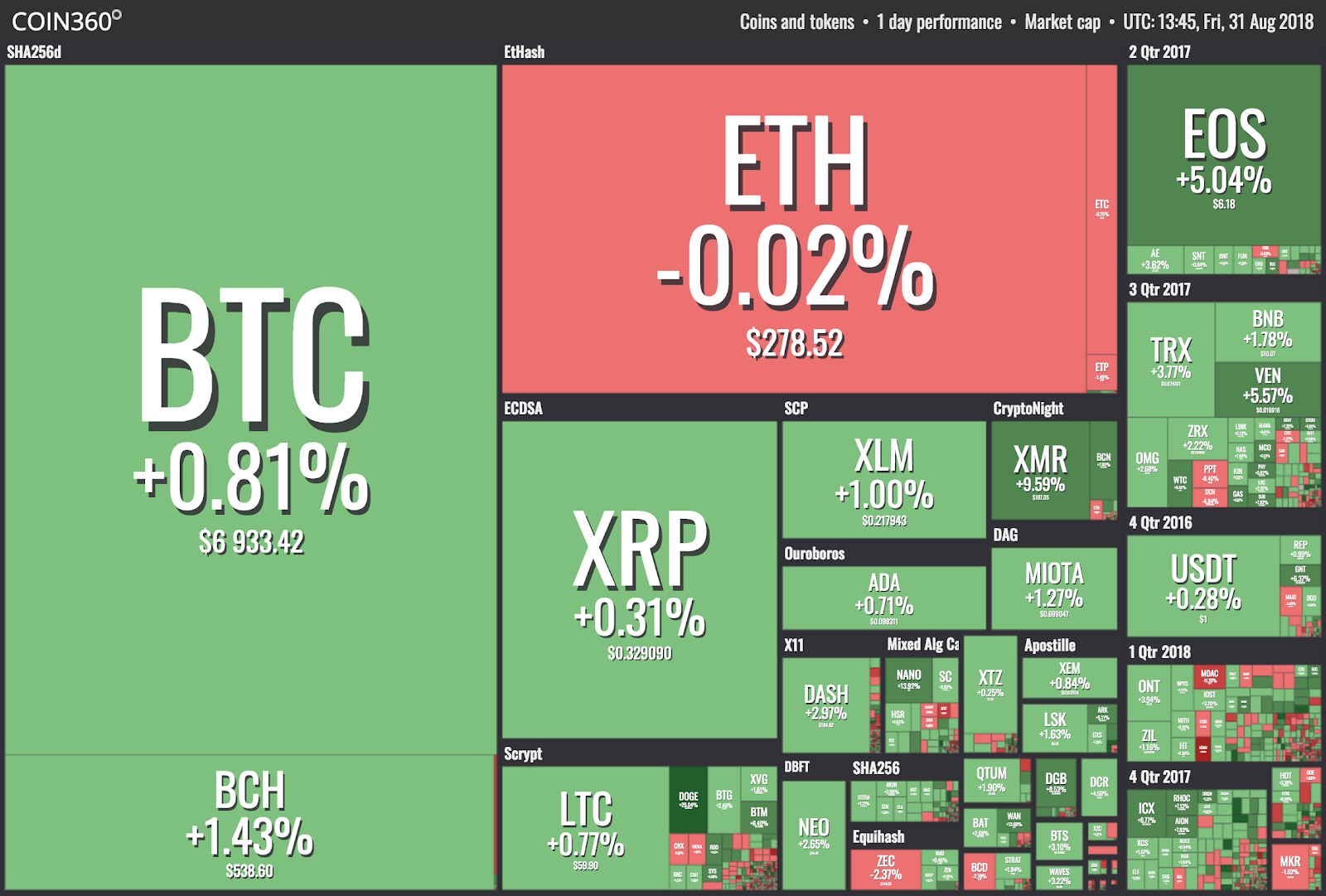 Bitcoin (BTC) is trading at around $6,925 at press time, up around 1 percent on the day, according to Cointelegraph’s Bitcoin price index. 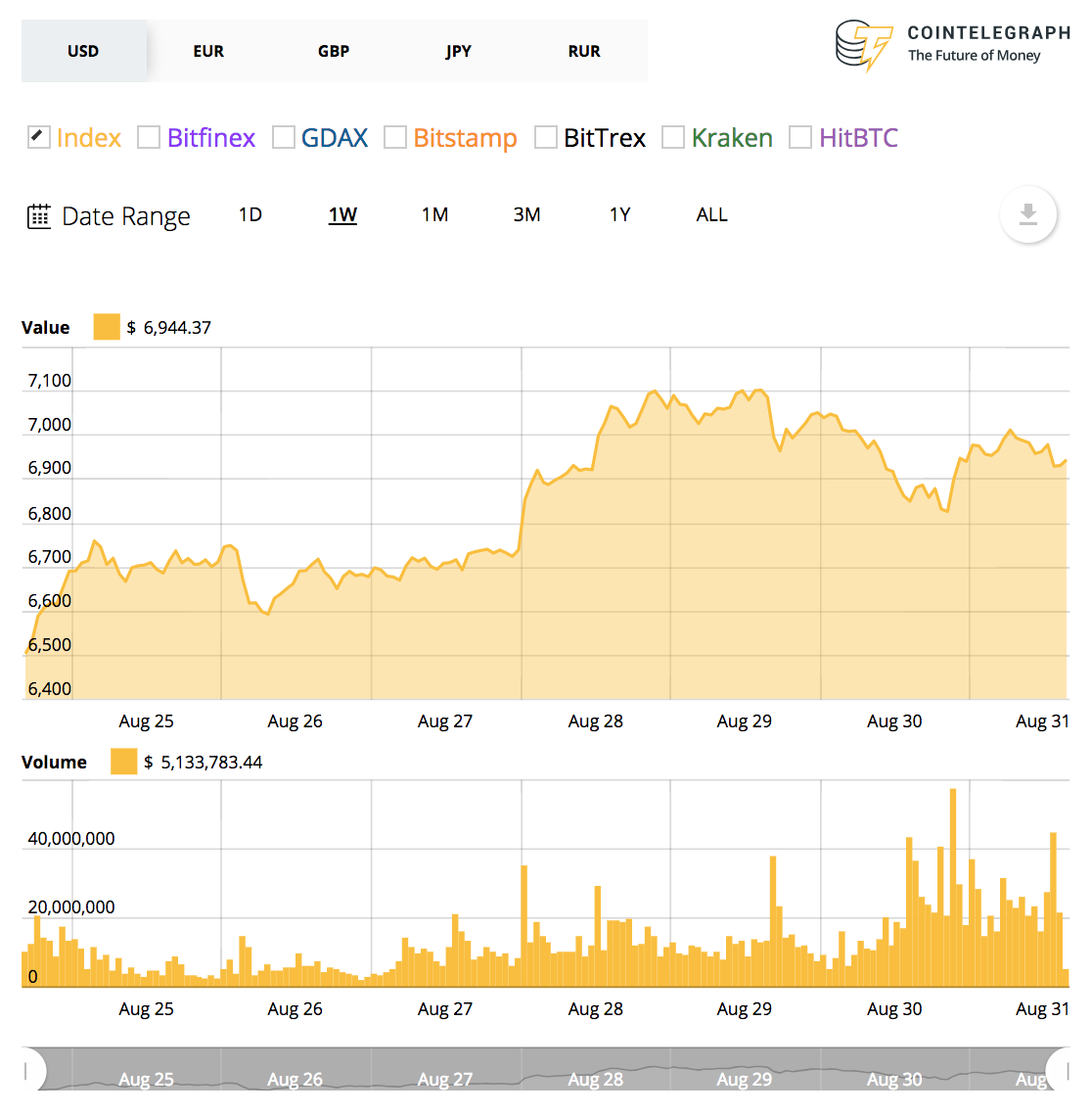 On the week, Bitcoin remains up a solid 6.45 percent, and has closed its monthly losses to around 10.6 percent.

Ethereum (ETH) is trading around $277 at press time, seeing a negligible percentage change on the day. The altcoin has barely budged in response to bullish news that the Chicago Board Options Exchange (CBOE) is looking to launch ETH futures by the end of 2018.

Having seen a strong price surge August 28-29, Ethereum is now back within the trading range it jaggedly held between August 20 and August 27. On its weekly chart, Ethereum is up 2 percent, with monthly losses at a hefty 35.6 percent. 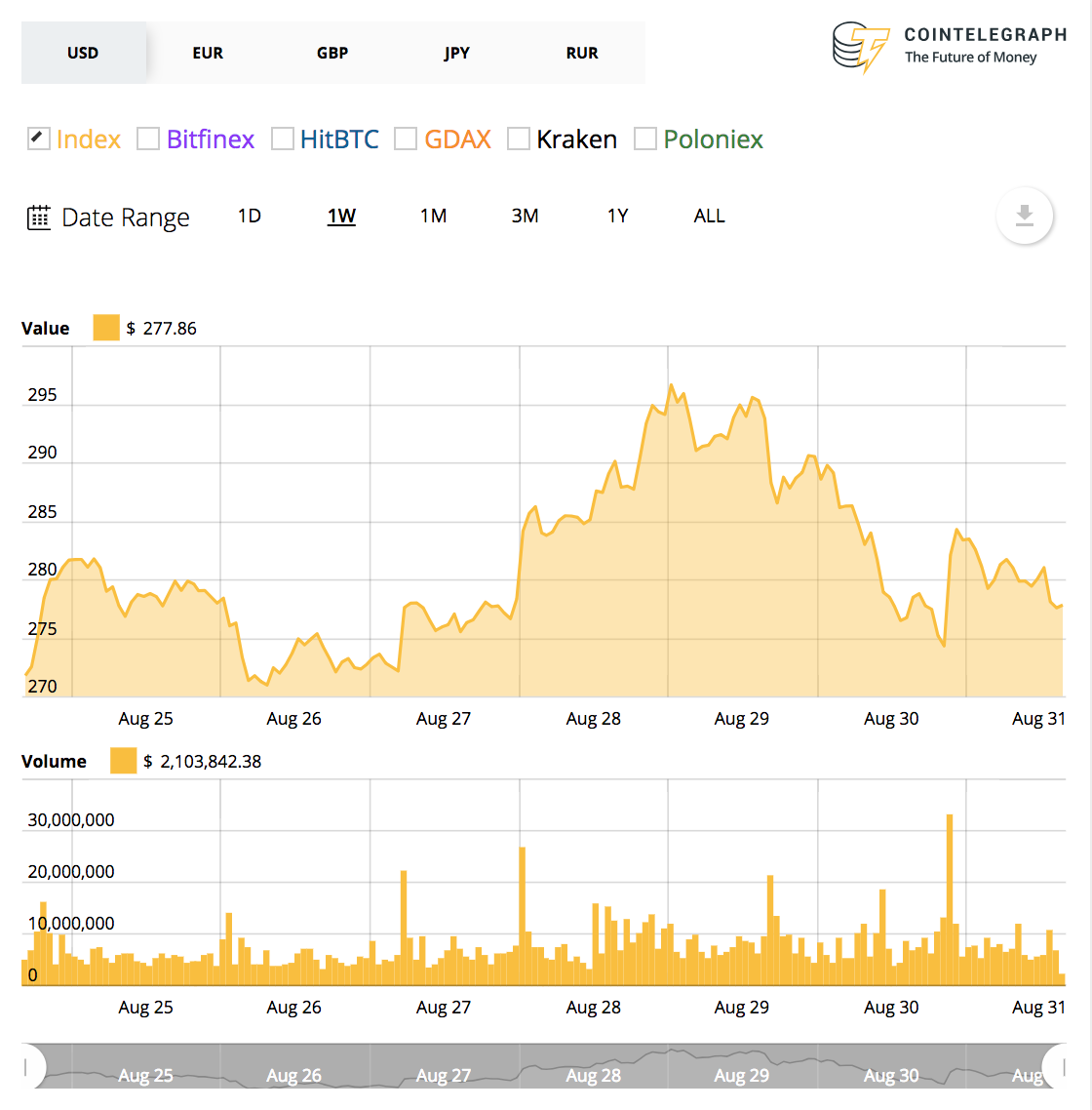 EOS (EOS) is a strong outlier, up a bullish 5 percent on the day to trade at $6.22, capping a volatile week that nonetheless shows strong positive momentum. 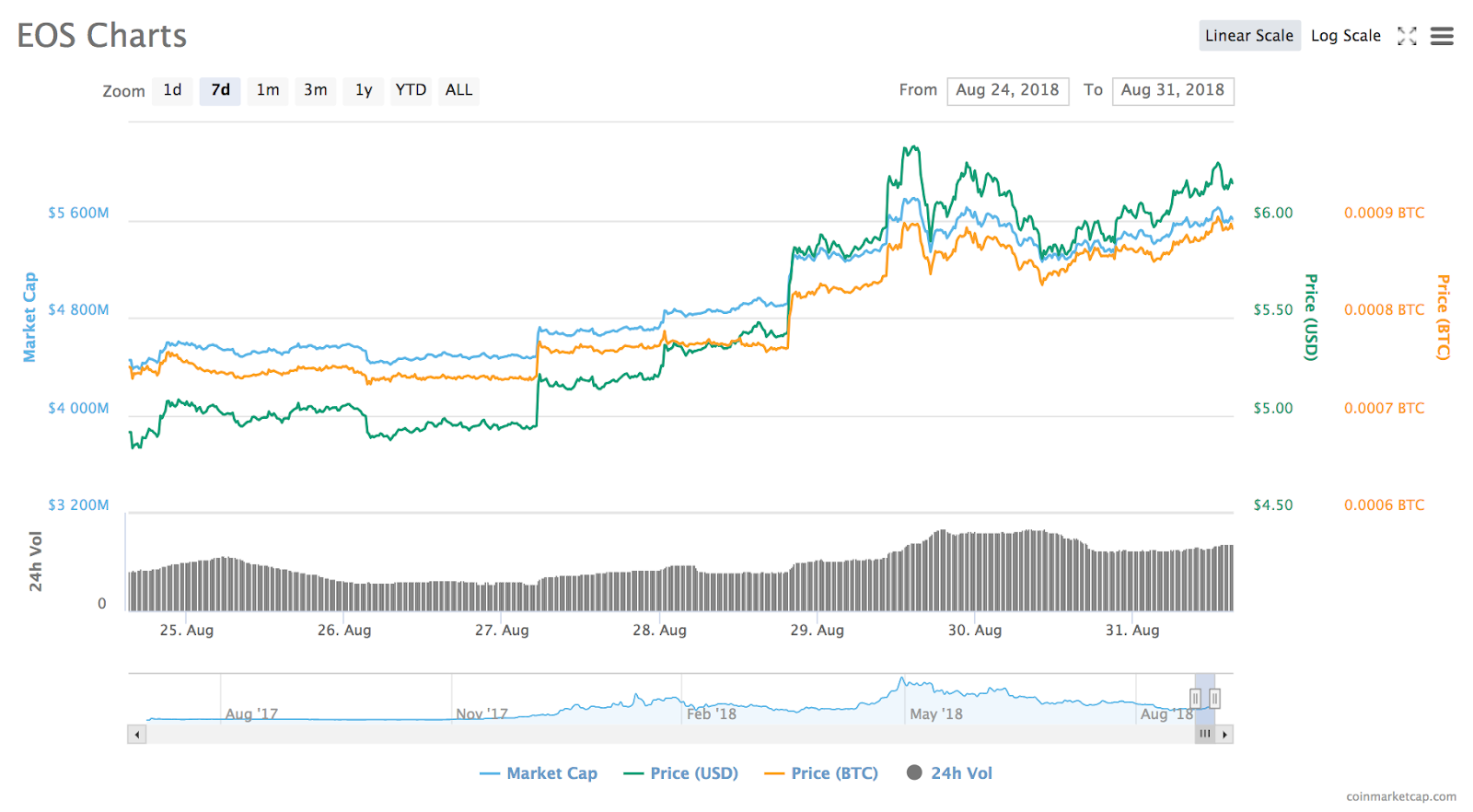 Among the top twenty coins, Monero (XLM) is the strongest performer, up 10 percent on the day to trade at $107.78 at press time. Having dipped in accordance with yesterday’s market-wide correction, Monero has today surged beyond its trading levels earlier this week. 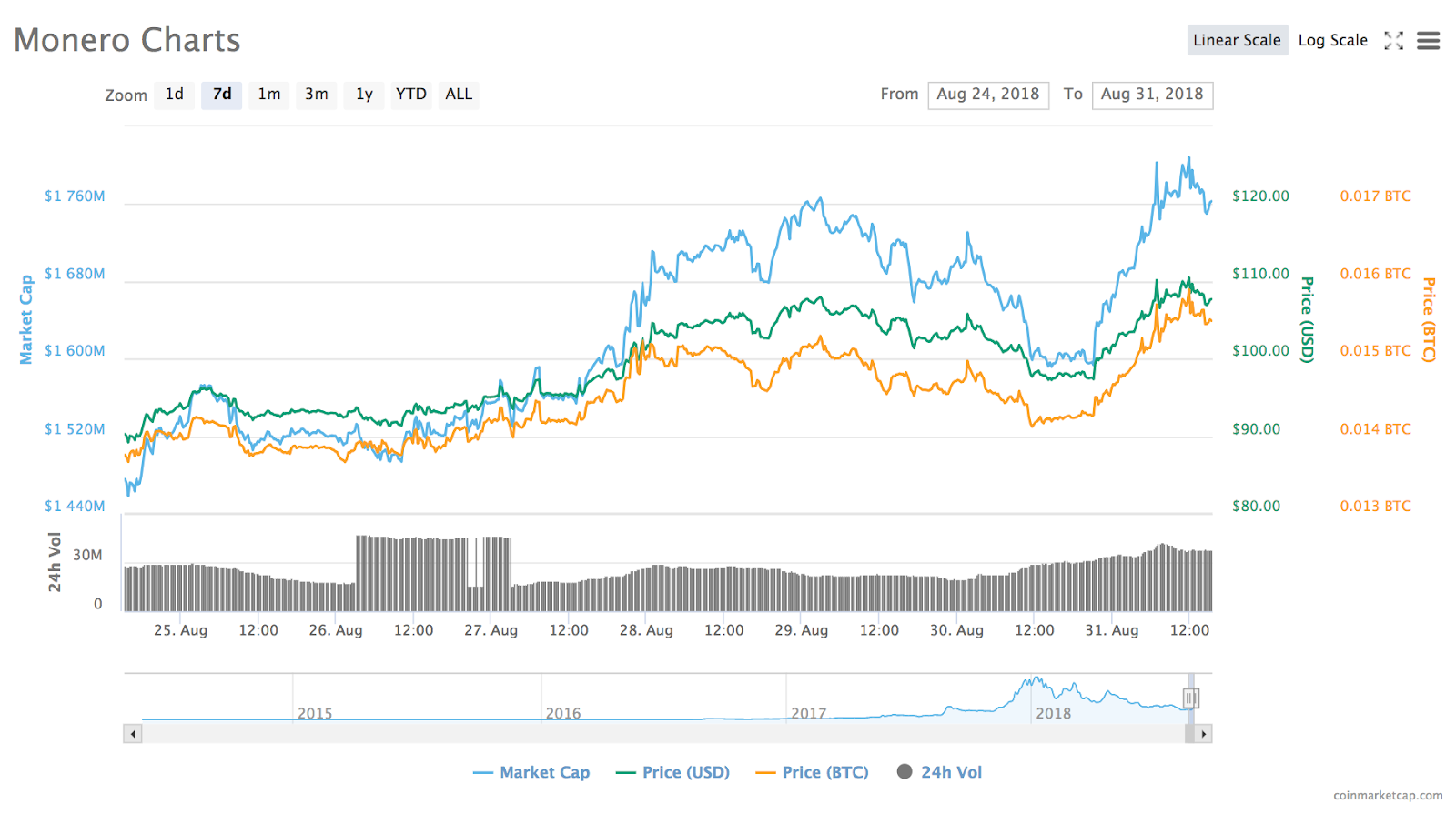 Other top twenty coins are seeing 24-hour growth of between 2 and 4 percent.

Total market capitalization of all cryptocurrencies is around $224.7 billion at press time, down $8.5 billion from its weekly peak at $233.2 billion.

Good news for the Asian crypto markets has been forthcoming this week, as Japanese social messaging giant LINE announced the launch its own cryptocurrency and in-house blockchain, and Japanese e-commerce giant Rakuten – which has a market capitalization of over $12.5 billion – has unveiled a $2.4 million deal to acquire domestic crypto exchange Everybody’s Bitcoin.

On Monday, the government of a South Korean province revealed it would issue its own blockchain-based digital currency in a move to replace a state loyalty scheme. The news comes at a pivotal time for the Korean crypto space, as the country’s parliament debates legalizing Initial Coin Offerings (ICOs) and even creating a Malta-style “Blockchain Island.”