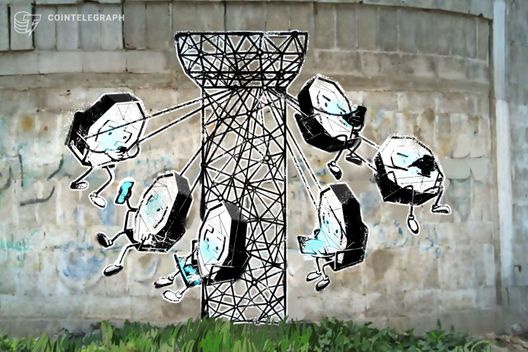 Yahoo Finance has integrated BTC, ETH, and LTC on its iOS app this week, with a version briefly appearing and disappearing on its desktop version despite Yahoo noting that the desktop, mobile web, and Android version won’t be available for several weeks. A Yahoo Finance press release notes that users that wish to trade crypto on Yahoo Finance will have to link a broker account via integrated third party service TradeIt.

The North American Securities Administrators Association (NASAA) announced this week that their “Operation Cryptosweep,” which is a probe into potentially fraudulent crypto investment programs that was introduced in may, has resulted in over 200 investigations of ICOs and crypto-related investment products. The NASAA noted that investors should perform their own due diligence before investing in crypto-related projects, and stated that any project qualified as a security should be registered with the appropriate regulatory agencies or apply for an exemption from registration.

According to a report from South Korea’s state-run Korea Development Bank (KDB), North Korea (DPRK) has attempted to mine Bitcoin (BTC). According to a local news outlet, the mining attempt – which was reportedly conducted on a “on a small scale” between May and July 2017 – seems to have been unsuccessful. KDB’s research team also reported that North Korean tech firm Chosun Expo is allegedly now in the process of developing a BTC crypto exchange, without any further details provided.

Lori Beer, the chief information officer at JPMorgan, believes that blockchain tech will eventually replace the current technology in the span of a few years. According to an Argentinian media source, Beer noted that JPMorgan uses blockchain technology to “simplify the payment process and to store customers’ information related to KYC (Know Your Customer) policy.” Beer also added that the bank currently only supports what is regulated in terms of cryptocurrencies, and has specialists who are “evaluating what is happening.”

"Remember everybody used to bite Nickel, now everybody doing Bitcoin." Forbes describes the line as an important sign of Bitcoin’s presence in mass culture and the realization that the cryptocurrency has a range of use cases beyond criminal.

"I’m not sure that market manipulations are related to Tether directly, if they do exist. It has been an unregulated market set of exchanges that enable big players to do what they want to do [...] Ideally we’ll get a little better regulation of those centralized exchanges at least,” — Joseph Lubin, founder of Ethereum

“I’d like to see more [talk around] Lightning Network and sidechains, ways of helping Bitcoin and Litecoin to scale. I think with the price depressed, it’s actually a good time for people to […] get stuff done. That’s what I’ve seen in the past few bear markets actually,” — Charlie Lee, founder of Litecoin

“We will see a greater and wider use of blockchain [...] In a few years blockchain will replace the existing technology, today it only coexists with the current one,” — Lori Beer, chief information officer at JPMorgan

Polish legislators have introduced a long-awaited new bill to clarify the current crypto taxation policy, which the local crypto community had resisted earlier this year. The bill, which defines cryptocurrencies in terms of the Act on Counteracting Money Laundering and Terrorism Financing as a “digital representation of money,” notes that crypto-to-crypto transactions performed on the stock exchange or individually will be tax free, while income from selling services, property, and goods will be treated like revenue for taxation purposes.

California’s AB 2658, a bill that calls for the establishment of a working group on blockchain technology, has passed in both houses of the state legislature and will now head to the governor for approval. The bill requires the Secretary of the Government Operations Agency to form a blockchain working group on or before July 1, 2019 that should consist of participants from both technology and non-technology industries, as well as appointees with a background in law, and representatives of privacy and consumer organizations.

OpenFinance, a security token trading platform, has launched a regulated alternative trading system (ATS) for security tokens, according to information shared with Cointelegraph this week. An ATS, defined in the U.S. and Canada, is a non-exchange trading venue that matches buyers and sellers to find counterparties for transactions.

According to a report by Business Insider, CBOE Global Markets, the owner of the Chicago Board Options Exchange (CBOE) and one of the world's largest exchange holding companies, is looking to launch futures for Ethereum (ETH) by the end of 2018. According to sources, CBOE will reportedly base its ETH futures on Gemini’s underlying market. Business Insider wrote that the exchange is waiting on approval from the CFTC before officially launching.

Lloyd’s of London, a U.K. insurance market leader founded in 1686, announced this week that it will insure a crypto custody platform by U.S.-based custodial firm Kingdom Trust. Kingdom Trust, which serves over 100,000 customers and has $12 billion in assets under custody, is the reportedly the “first” regulated financial institution to offer qualified custody for digital asset investments. The company is now launching insurance coverage for digital currency to protect investors against theft and destruction of assets.

Japanese social media giant LINE reported this week on the launch of its own cryptocurrency and in-house blockchain. The mainnet, LINK chain, is a “service-oriented” blockchain network that will allow dApps to be directly applied to LINE’s messaging platform. According to LINE, a total of 1 billion LINK tokens will be issued to users of its platform, with 20 percent kept as a company reserve.

Alipay, Ant Financial Partner With Chinese Authorities for Blockchain Use

Alipay and its parent company Ant Financial have partnered with local Chinese authorities to use blockchain for confirming the authenticity of rice from the Wuchang region. According to local media, the deal with the municipal government in Wuchang in Heilongjiang Province aims to stop counterfeit versions of the well-known Wuchang rice making it into the market. Local media also noted that warehousing, delivery, and distribution links will be available to customers in real time, and delivery time will be brought down from three to seven days to less than two days.

The Associated Press (AP) news agency has signed a content licensing partnership with blockchain-based startup Civil, which develops technology to track ownership rights and content usage in the journalism industry. As part of the project, the AP will deliver its content, including national and international news to Civil, so that news agencies can access it on the platform. The AP notes that they are interested in exploring ways to secure intellectual property rights, support ethical journalism, and track content usage with blockchain technology.

IBM, CSIRO’s Data61, and law firm Herbert Smith Freehills have partnered for a new Australian consortium to build a cross-industry blockchain-based smart contracts platform for enterprises. Data61, a digital innovation center that forms part of Australia’s Commonwealth Scientific and Industrial Research Organisation (CSIRO), will collaborate with the other entities to create the Australian National Blockchain (ANB). The ANB aims to pool the tech, scientific and legal expertise of the three partners to create a nationwide, legally-compliant blockchain infrastructure for the digital economy.

South Korean e-commerce marketplace Ticket Monster announced this week it had closed a $32 million funding round for its stablecoin Terra, with the aim to create an in-house cryptocurrency to complement its existing token, Luna. Binance Labs, OKEx and Huobi Capital, as well as funds including Polychain Capital, contributed to the funding round.

Swiss and US-based blockchain cloud computing startup DFINITY has closed a new funding round worth around $105 million. Both Polychain Capital and Andreessen Horowitz via its investment fund a16z participated in DFINITY’s funding round, having also contributed to a $61 million round in February. The startup, which aims to build what it describes as an “Internet Computer,” ultimately wants to create a platform which will “host the world’s next generation of software and services on a public network.” 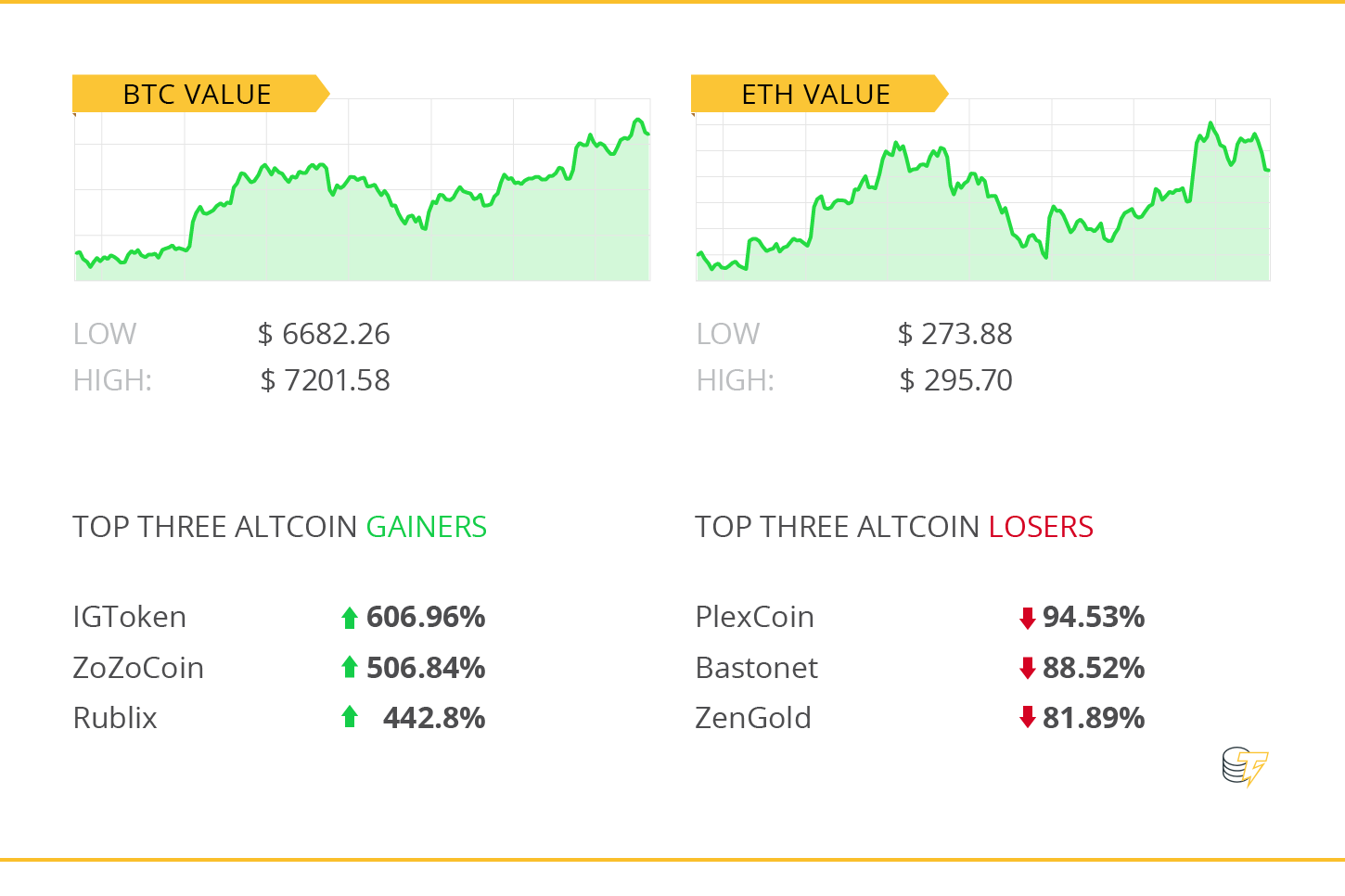 The crypto markets are seeing some returns this week, with Bitcoin trading for around $7,245 and Ethereum at around $292. Total market cap is now around $235 billion.

Chinese tech giant Baidu has joined Tencent and Alibaba in carrying out anti-crypto measures in line with Beijing’s toughened stance. China’s version of Google has reportedly closed at least two popular crypto-related chat forums, informing users that the move comes “in accordance with relevant laws, regulations and policies.” Earlier, WeChat-operator Tencent also released its own statement about its ban on crypto trading, and Alibaba also announced it will restrict or permanently ban any accounts it finds to be engaged in crypto trading.

Atlas Quantum, a Brazilian crypto trading platform, revealed a data breach this week that led to the exposure of its 260,000 clients’ data, but did not affect their funds. According to the company, measures were enacted following the leak to prevent further attacks. Some of the platform’s functions were temporarily paused after the incident, but the company assured users that passwords and encryption keys remained safe.

Gerald Rome, the Colorado Securities Commissioner, has ordered three crypto firms alleged of promoting unregistered ICOs, meaning that a party or individual in a case must justify, prove, or explain something in court. Bionic Coin, Sybrelabs Ltd., and Global Pay Net (also known as GLPN Coin and GPN Token) received orders this week, after the firms reportedly made hyperbolic and misleading statements to investors regarding their products.

The Guangzhou Development District, a special economic zone in southern China close to Hong Kong, is now prevented from allowing commercial venues to host crypto-related events. The ban comes after an almost identical ban first imposed upon venues in Beijing’s Chaoyang district in mid-August. According to this new order, Guangzhou’s Financial Development Bureau reportedly issued a notice warning of the need to “maintain the security and stability of the financial system.”

A new study by ICO advisory firm Satis Group has found that Bitcoin could potentially reach $98,000 in the next five years. According to the report, the overall value of cryptoassets needed to support the economy will grow to $3.6 trillion by 2028, while 90 percent of cryptoasset value will be extracted from penetration of offshore deposits in the next ten years.

Fortune’s The Ledger explains how tokenizing could help Elon Musk achieve his stated, and then retracted, idea of taking Tesla private. According to Musk’s statement, he decided to leave the company public after all because “there is also no proven path for most retail investors to own shares if we were private.” However, Fortune suggests a hypothetical “Tesla Coin” that could allow Musk to have his cake and eat it too by allowing more than just accredited investors to own shares in a private company.

Why You Need a Physical Vault to Secure A Virtual Currency

Wired dives into the behind-the-scenes specifics of how Coinbase generates encryption keys for its custody clients (a tent, a Faraday cage that blocks electromagnetic radiation, three laptops, a coin toss, and a printer). Although this process may seem complicated and almost archaic (the idea of storing virtual money on paper in a bank vault could be considered a step backwards technologically), after all, the author references, horses and carts were more efficient than cars when the tech was still new.