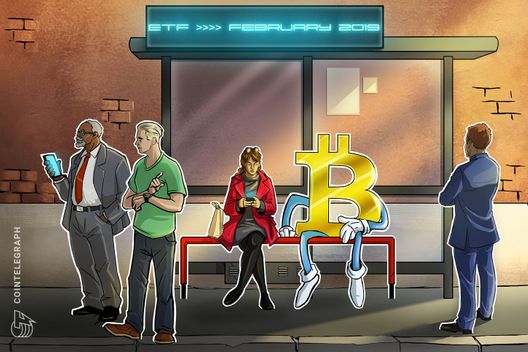 On Sept. 20, the SEC requested more comments for the VanEck SolidX ETF case.

On Sept. 20, the United States Securities and Exchange Commission (SEC) requested more comments on its decision on the listing and trading of a Bitcoin (BTC) exchange-traded fund (ETF) created by New York-based firms VanEck and SolidX. Consequently, the regulator’s decision was postponed yet again.

Here’s why the VanEck/SolidX ETF has a greater chance than the nine ETF temporarily rejected by the SEC in August, and why a BTC ETF isn’t likely to appear until 2019.

What’s so special about this ETF?

Cointelegraph has previously covered ETFs and why they are important for mass adoption. In short, an ETF is a kind of investment fund that is tied to the price of an underlying asset — a commodity, an index, bonds or a basket of assets — like an index fund and is traded on exchanges, available to both retail and institutional investors.

A Bitcoin ETF, in turn, tracks Bitcoin as the underlying asset. It is an indirect way of purchasing BTC, where the investor only holds the corresponding security without having to store the actual coins. If listed on a regulated U.S. exchange, it could pave the way for large mainstream investors, potentially pushing Bitcoin toward broader recognition on Wall Street.

That’s what this Bitcoin ETF powered by investment firm VanEck and financial service company SolidX is trying to achieve. Both VanEck and SolidX had tried registering their ETF separately beforehand — in August 2017 and in July 2016 respectively — but the SEC denied both attempts.

Now, their collaborative ETF is generally viewed as one of the most promising ones. The fund is tied to VanEck's subsidiary index MVIS, which will calculate the real-time price of BTC based on executable bids and asks derived from U.S.-based crypto over-the-counter (OTC) markets instead of more conventional crypto exchanges, while SolidX will sponsor the project. It is expected to be listed on the Chicago Board of Exchange (CBOE) BZX Equities Exchange. The fund’s bid with the SEC was filed on June 6.

Unlike the Winklevoss’ ETF attempt (and nine other ETFs that the SEC rejected earlier in August), the VanEck/SolidX fund puts additional emphasis on insurance: It is derivative-backed, as per its press release, implying that the firms will actually hold BTC. This will allegedly protect against the loss or theft of the cryptocurrency.

Moreover, each share of the VanEck SolidX Bitcoin Trust is set to cost a substantial $200,000. As SolidX CEO Daniel H. Gallancy has previously explained to CNBC, the price is set at a higher rate to attract more institutional, rather than retail investors.

Not denied, but postponed: The SEC asks the public to weight in

Nevertheless, the SEC have been taking its time to issue a decision on the aforementioned ETF. First, on Aug. 7, the agency postponed the case until Sept. 30. In the notice, the SEC stated that it had received more than 1,300 comments on the proposed rule change to list and trade shares of the VanEck SolidX ETF. It didn’t specify why exactly the delay was taking place.

Then, on Sept. 20, the SEC requested further comments regarding its decision on the VanEck SolidX ETF. The watchdog explained that it has not “reached any conclusions with respect to any of the issues involved,” and is asking for additional comments from interested parties, addressing the adequacy of the BZX exchange’s statement in support of the proposal.

In particular, the SEC is seeking comments on 18 key issues, among them are commenters’ views on BZX’s assertions that BTC “is arguably less susceptible to manipulation than other commodities that underlie exchange-traded products (ETPs),” as well as SolidX’s assertion that “the OTC desks have a better measure of the market than any
exchange-specific reference price,” among others. The note further reads:

“The Commission is instituting proceedings to allow for additional analysis of the proposed rule change’s consistency with Section 6(b)(5) of the Act, which requires, among other things, that the rules of a national securities exchange be ‘designed to prevent fraudulent and manipulative acts and practices, to promote just and equitable principles of trade,’ and ‘to protect investors and the public interest.’”

The SEC now has until February 2019 to come up with a decision (the allowable delays are served in two increments: one six-month delay and one final three-month delay, which makes nine months in total). Given the fact that the SEC has requested another round of comments after receiving more than 1,300 letters in previous months, it suggests that the agency is still uncertain about the state of the crypto market.

Thus, the SEC’s relationship with crypto-related ETFs has been rocky so far. For instance, when it rejected nine applications to list and trade various BTC ETFs in August, the regulator made a U-turn as soon as on the following day and stated that it would review its decision of all those ETFs in the future — the agency has still not released a deadline for that, however.

Similarly, on July 26, the SEC’s rejection of the Winklevoss brothers’ application for a Bitcoin ETF also came with a silver lining. Soon after the hearing, SEC Commissioner Hester M. Peirce released a statement, where she opined that the agency’s move “sends a strong signal that innovation is unwelcome in our markets, a signal that may have effects far beyond the fate of Bitcoin ETPs.” Moreover, she claimed that the agency overstepped “its limited role” because it focused on the nature of the underlying BTC market instead of the derivative itself.

Still, the SEC has explained all its rejections (not delays) for ETFs in a similar fashion. The main problem seems to be that the applicants are not meeting the requirements to “prevent fraudulent and manipulative acts and practices” on the market.

Additionally, the watchdog had pointed out the inadequate size of the Bitcoin ETF market. In August, the regulatory body wrote:

“Among other things, the Exchange has offered no record evidence to demonstrate that Bitcoin futures markets are ‘markets of significant size.’ That failure is critical because [...] the Exchange has failed to establish that other means to prevent fraudulent and manipulative acts and practices will be sufficient, and therefore surveillance-sharing with a regulated market of significant size related to Bitcoin is necessary.”

The SEC has also stressed that its decisions did not rest “on an evaluation of whether Bitcoin, or blockchain technology more generally, has utility or value as an innovation or an investment."

It is unclear what might change the SEC’s negative sentiment — one could argue that top investment players’ funds could make the market more liquid and large scale, but there is a paradox: It is more likely to happen once a crypto-related ETF receives the watchdog’s blessing and enters the market in full force.

There is a possibility that some of the comments the agency will receive over the following months might play a role too — but it is a considerably weaker one, giving the fact that the SEC had already dealt with more than 1,300 comments on the VanEck SolidX case alone.

Still, the crypto industry might become more war-ready by 2019. In an interview with CNBC aired in August, crypto analyst Brian Kelly predicted that the SEC would postpone their decision on VanEck SolidX’ ETF and also argued that, according to statistics from CME derivatives marketplace, the futures market is evolving quickly and that we will likely “have a much better shot” at ETF approval by next year:

“Here’s CME Futures open interest of large holders. [As of] April, you’re starting to see a big increase […] about an 85 percent growth rate. If you extrapolate that out, by February 2019, you’re going to have a very robust market here.”

Meanwhile, even more solid players might try their hand in the ETF race. On Sept 7, the world’s largest asset investment manager, BlackRock, which oversees $6.3 trillion in assets, and Coinbase, a major crypto platform, announced they were in talks to develop a cryptocurrency-based ETF to boost market activity and facilitate growing demand from Wall Street and other institutions.