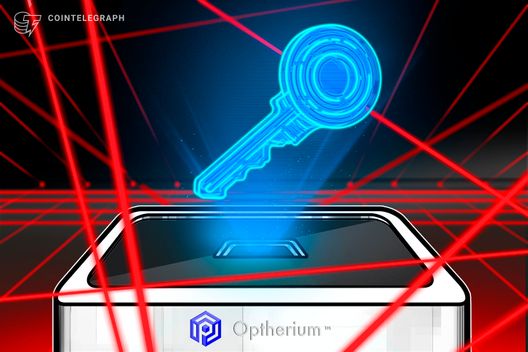 A new global blockchain finance infrastructure will allow users to recover their private keys – ensuring they “never lose their funds.”

Fraud, inefficient and expensive systems, a lack of transparency and slow transactions at busy times are a reality for many business networks around the world – inconveniencing merchants, their customers, and even the middlemen tasked with processing their transactions.

Volume limitations have also frustrated retailers who may have considered turning to crypto, while a lack of security has deterred the public.

Optherium, a global fintech company, believes that its ecosystem could be the silver bullet to eliminate the main issues facing the crypto world – as well as the old-fashioned economy. According to its white paper, the platform wants to tackle three key issues: slow transaction times, a lack of security seen in multicurrency wallets, and a general lack of usability.

The company is a member of the Linux Foundation. It has been successfully certified for advertising on Facebook and Google, who assess the eligibility of the companies wanting to run ads for cryptocurrency products and services. Optherium has also been featured on the likes of Bloomberg and Fox Business, and the company is positioning itself as a blockchain-as-a-service provider to Fortune 500 companies.

Optherium offers an environment for instant, low-cost transactions backed up by “unprecedented” security levels thanks to its patented Multi-Decentralized Private Blockchains Network and Multisecure Technology. The company says its modular ecosystem gives banks, financial institutions and companies a way to offer these features on a “white label” basis, as well as the opportunity to adapt them for their own purposes.

The company’s infrastructure is fully licensed in the EU for exchanges between cryptocurrency and fiat – in addition to eWallet services. The fintech company has also registered with the IRS and is exempt under SEC Regulation D in the US. In time, it hopes its global finance blockchain infrastructure will be “accessible to all financial institutions, corporations and individual users.”

It has already established a working product by powering the VivusPay mobile application, which uses Optherium’s speed and security to achieve instant crypto to fiat and fiat to crypto transactions worldwide with lower fees.

Optherium consists of private blockchain networks where on-chain and cross-chain transactions can be completed. The company claims it can reach speeds of more than 100,000 transactions per second, with payments verified “four times faster than Visa and much faster than Ripple.”

When more users join the Optherium ecosystem, it plans to group nodes by region networks so it can better localize user transactions, making them faster and preventing an increase in demand from clogging up its network.

Optherium has launched a key recovery service which allows a user to regain access to assets and data if a private key is stolen or lost. Its ecosystem stores private keys in cold storage, shared among several airgapped computers that are “never connected to any network.” These isolated and safeguarded machines should ensure that hackers will never be in close enough proximity to Optherium hardware. By eliminating physical access to the computers, the company hopes to ensure that user keys remain safe and can only be recovered by qualified agents.

For consumers so used to being able to recover forgotten passwords and PINs, the ramifications of losing a private key have made them nervous – not to mention trying to get their heads around technology they don’t fully understand. Although some services allow users to recover these details, a single blockchain network has been unable to incorporate such protocols.

Users are required to enter personal information and answers to security questions when they are setting up their VivusPay eWallet. These details are then stored in Optherium’s Multi-Decentralized Private Blockchains Network. At this stage, users also set up their Dynamic Biometrics – a “fraud proof” feature which captures someone's movements as well as their features.

The company claims this information ensures “users will never lose their funds due to the loss of their private keys.”

Optherium’s ecosystem also features a specially built utility and facilitator token known as OPEX. As well as being able to cover transaction fees incurred on the platform, the token acts as a bridge between the cryptocurrencies and fiat currencies that the service supports.

OPEX serves an “internal liquidity reserve token” for hundreds of digital currency pairings – paving the way for “rapid internal conversion between currencies in response to user requests.” The company says fiat and crypto can both be used with equal ease and the system can also handle huge amounts that may be transferred by large conglomerates.

Optherium’s whitelisting phase runs from Oct 5 to Dec 5. A presale of OPEX tokens will immediately follow and is expected to end on Feb 5. The main token sale will take place afterwards, wrapping up on March 5. OPEX is going to be listed on CoinBene, an exchange which is also promoting the VivusPay eWallet. Over time, Optherium aims to launch a debit card which can complete instant transactions between cryptocurrency and fiat, enabling users to complete withdrawals from ATMs worldwide. VivusPay facilitates payments using near field communication (NFC) and QR codes, and opens the door to paying at points of sale using crypto.

Company’s representatives told Cointelegraph that on Nov. 12, 2018, Optherium Labs signed a “multimillion euro agreement” with CFC Legal and MPOTrustee, an Italy-based company which specializes in helping entrepreneurs, professionals, and companies to protect their assets. The partnership aims to create TrustMeUp, a global trust platform built within the Optherium ecosystem. According to Optherium, the new project was inspired by successful fan-ownership business models such as soccer clubs Barcelona, Real Madrid, and the Green Bay Packers football team. The company describes the platform as a “formal and democratic non-profit organization comprised of passionate, enthusiastic, Italian A-series football supporters.” The app is designed to allow direct and secure engagement with clubs and their supporters.