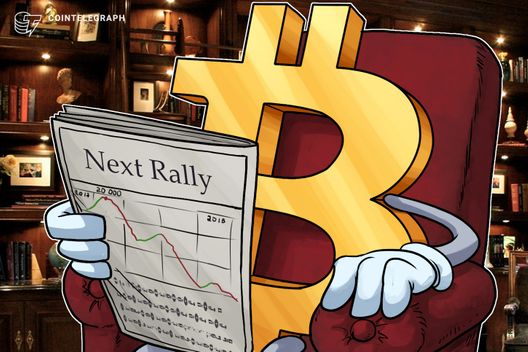 Bitcoin is now trading around $3,550, up 2 percent and capping gains of around $260 in 24 hours before press time. The coin, however, is over 82 percent down from its price point this time last year.

“Could Bitcoin go to $50,000? Absolutely. It doesn’t have the same kind of price-to-earnings, enterprise value to revenue that normally puts a kind of upper bound or a ceiling on a typical early-stage technology company [...] How long will it take? I’m not sure.”

After CNBC host Melissa Lee criticized the belief that the historic 2017 bull run “could only go higher,” Bogart said “there is absolutely nothing wrong with the [bull] thesis,” but noted that up until recently, the Bitcoin market has been “almost entirely driven by retail [investors].” This, he suggested, still results in bull market runs “going a little too high,” and conversely, bearish dips “too low.”

Bogart stressed that notwithstanding short-term price weakness, the “fundamentals” of the technology and concept are still there. In particular, the VC exec stated that 2018 has seen major advancements in scaling, with the Lightning Network helping to “transact extremely cheaply, and extremely quickly.”

He further pointed to increased institutionalization of the asset class, with this year’s endowments from United States Ivy League universities such as Yale and Harvard, forthcoming Bitcoin derivatives and the global digital assets trading platform from the Intercontinental Exchange’s (ICE) “Bakkt,” and the establishment of more qualified custodians for crypto assets.

Bogart’s last bullish remarks highlighted the outstanding “quality of talent” entering the crypto space, suggesting that the “best and brightest” are coming in to “work on Bitcoin.”

With one last consideration of price volatility, Bogart said that Bitcoin today could also “absolutely” go lower — “anywhere between here and $2,000 or even $1,000” — but that all of these price points represent “a great buying opportunity,” adding:

In recent comments, crypto bull and co-founder of Fundstrat Global Advisors Thomas Lee said he believes the “fair value of Bitcoin is significantly higher than the current price.” He proposed a figure between $13,800 and $14,800, considering the number of active wallet addresses, usage per account and other factors influencing supply.