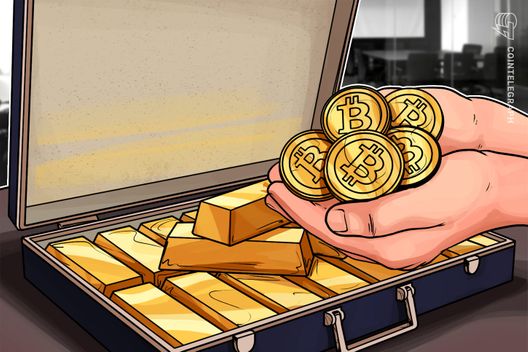 A Wall Street Journal has suggested that Bitcoin’s correlation with “traditional” assets markets has been high in recent days.

Citing data from research firm Excalibur Pro Inc., the WSJ states that the top cryptocurrency has traded at a 0.84 correlation to gold over the past five days, where -1 indicates complete inversion and +1 perfect correlation. Moreover, Bitcoin has traded at a 0.77 correlation to the Chicago Board of Options Exchange’s Volatility index (VIX), a benchmark index for the United States equity market volatility.

While the WSJ frames the strong correlation between traditional markets and what the article dubs as the rebellious first cryptocurrency, Bitcoin, as something of an unexpected twist of fate, the article also offers several explanations as to why the pattern may have formed.

The first is the reported influx of institutional money into the crypto space, with the WSJ citing the growth of Grayscale Investments’ over-the-counter exchange-traded fund (ETF), the Bitcoin Investment Trust, as a prime example.

As per the article, the trust saw $51 million in assets under management (AUM) during its first year (2013). By the end of 2017, in the midst of the crypto market bull run, AUM had surged to around  $3.5 billion. As of recently — due to the so-called “crypto winter” — the trust reportedly retains about $900 million AUM.

Another factor proffered is venture capital (VC) investment. The WSJ reports that whereas in 2013, VC investment in Bitcoin and the blockchain sector was at around $96 million, this grew to $500 million in 2016 and to over $2 billion in all-time VC crypto investment through the end of 2017. The WSJ gives no fresh data for 2018.

As the article notes, a pull factor for traditional capital into crypto is the building of trading services and infrastructure with high regulatory compliance; the advent of crypto futures trading, and attempts to gain broad acceptance for crypto-based ETFs.

As reported, the crypto space continues to undergo far-ranging transformation; major developments on the horizon include the launch of the Bakkt Bitcoin futures exchange from Intercontinental Exchange, the launch of investment giant Fidelity’s digital assets business, and the continued influx of stalwart investors such as Yale, Harvard and Stanford Universities.