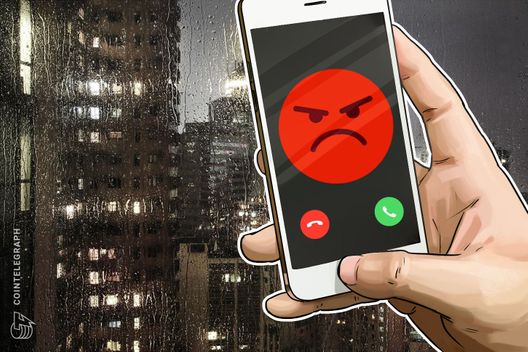 CEO of Messari has confirmed that the threatening calls he has received after his company criticized XRP were made by people unaffiliated with Ripple.

Ryan Selkis, the CEO of cryptocurrency analytics firm Messari, has allegedly received threats after his company published a critical analysis of Ripple (XRP) cryptocurrency. Selkis made this claim in a tweet posted on Jan. 24.

Research firm Messari published a report on Jan. 24, claiming that the market capitalization of XRP is likely overvalued by $6.1 billion. The company reportedly based its analysis on data from cryptocurrency exchanges and third party cryptocurrency data services.

Following the publication, the CEO and founder of Messari, Ryan Selkis, posted a tweet alleging that he received a threatening call from an anonymous caller:

“Someone just called me from a Nashville number and recited my wife’s birthday to me. Then hung up.”

In a follow-up tweet, Selkis announced that he received two more threatening calls, and asked several high-ranking employees of Ripple — including its CEO Brad Garlinghouse, CTO David Schwartz and SVP of Marketing and Communications Monica Long — to denounce the threats against his family, which, as he alleged, are coming from the XRP community:

“I want @Ripple @bgarlinghouse @MonicaLongSF @CoryTV @JoelKatz @warpaul to denounce any $xrp community threats against my family. I’m going to the fbi and local police after THREE calls. Ensuring our family doesn’t get swatted.”

As of press time, neither Ripple itself, nor any of its individual employees mentioned in Ryan Selkis’ tweet have commented on the alleged threatening calls. Both Messari and its CEO have not yet responded to Cointelegraph’s request for comment.

After going to a police station to report the calls, Selkis posted another tweet, apparently confirming that the callers were not actually affiliated with Ripple:

“I’m at the police station. It’s a punk kid most likely.”

In its recent Q4 2018 report, Ripple has revealed that the sales of its XRP tokens have declined from Q3 of the same year: the company sold $129 million and $163 million worth of tokens in the respective time periods.

At press time, XRP’s market capitalization is just under $13 billion, making it the second largest cryptocurrency, according to CoinMarketCap data.