Cryptocurrency research firm Diar indicates that the market capitalization for USD stablecoins has hit all-time highs and exceeded $4 billion, according to its latest weekly report published on May 21.

Stablecoins tied to the greenback have broken through to a market cap of almost $4.3 billion, according to Diar’s data. The report also reveals a surge in USD stablecoin trading volumes, with Circle and Coinbase-backed USDC posting a 130% uptick in volume between April and May, so far this month hitting $3.6 billion (as compared with $1.6 billion in April).

TrustToken's USD — while reporting slower month-on-month volume increase — outstripped USDC in terms of absolute trading volumes, reporting $3.8 billion in May so far as compared with $2.88 billion in April.

Notwithstanding these strong performances, Diar notes that stalwart if controversial stablecoin tether (USDT) still commands the lion’s share of the market, with trading volumes this year to date exceeding $1.3 trillion — already $200 million higher than the whole of 2018. 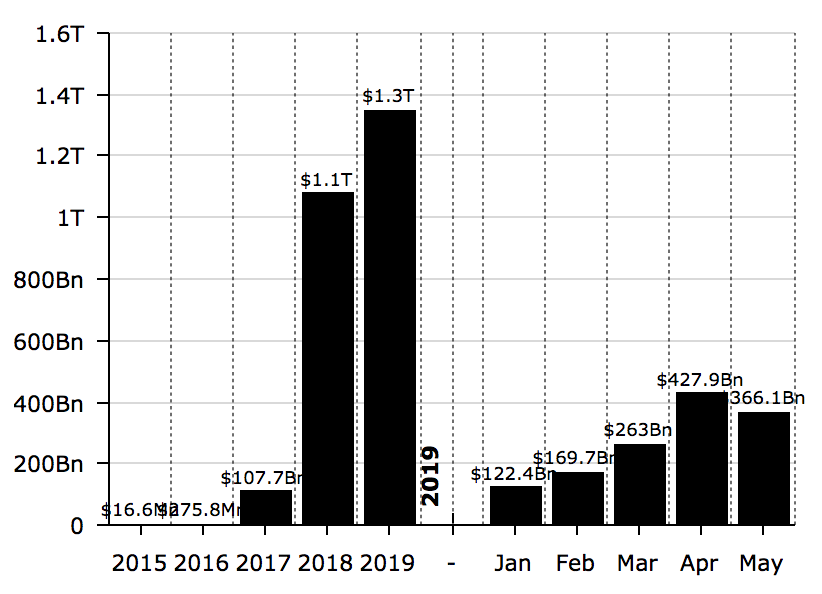 Diar nonetheless claims that outside of centralized exchanges, the broad use case of stablecoins has been slower to gain traction. While USDC reportedly saw a 540% increase in active addresses on-chain versus the start of 2019 — with TrustUSD ostensibly posting similar growth — the absolute peak addresses for the two coins has been capped to 5,500 per day, the report notes.

As Diar notes, Coinbase has made a recent bid to widen its stablecoin trading base by expanding USDC trading to customers in 85 countries — at the same time adding over 50 more jurisdictions to its broader crypto-crypto trading coverage.

Even as it continues to command stablecoin market dominance, tether has equally consistently continued to spark controversy. Having come under renewed criticism for being allegedly backed only 74% by USD reserves, the stablecoin issuer is also currently fielding a major injunction from the New York Attorney General over alleged misconduct together with affiliated crypto exchange Bitfinex.