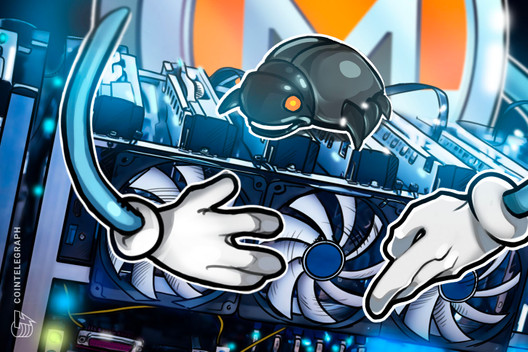 More than 1000 enterprise computer systems have been infected with a cryptojacking malware that installs a Monero mining application.

The global scale of the hacker group’s operations was revealed by cloud security firm Red Canary on May 26.

The report outlined the group’s methodology. The malware attacks servers running ASP.NET applications and exploits a vulnerability to install a web shell on the attacked computer and obtain administrator-level access to modify the server settings.

Next, the cybercriminals install the XMRRig application to take advantage of the resources of the infected machines. Most of the infected computers belong to large companies, though Red Canary did not reveal any names.

As with recent ransomware attacks using Trojans, criminals took advantage of the weakness of the Remote Desktop Protocol in Windows to penetrate systems.

The report highlights that although it is difficult to quantify the total number of infections, these attacks occurred in a relatively short amount of time.

Red Canary also warns that companies that believe themselves to be safe from such attacks are actually at high risk of their security being breached by the malware infection.

Speaking with Cointelegraph, Brett Callow, threat analyst at malware lab Emsisoft, commented on the current vulnerabilities of systems to such attacks:

“Cybercriminals specifically seek out weaknesses in the internet-facing systems and, when found, exploit them. Companies can significantly reduce their risk factor by following well-established best practices such as timely patching, using MFA, disabling PowerShell when not needed, etc. If those best practices are not adhered to and the internet-facing servers are left vulnerable, it’s significantly more likely that a company will experience a crypto-mining, ransomware, data exfiltration or other security event.”

The use of the XMRRig app for unauthorized crypto-mining is a recent phenomenon that has been used by various groups of hackers.

In the same year, reports published by the cybersecurity companies Symantec and BlackBerry Cylance warned about the injection of the XMRRig app into computers through music files.