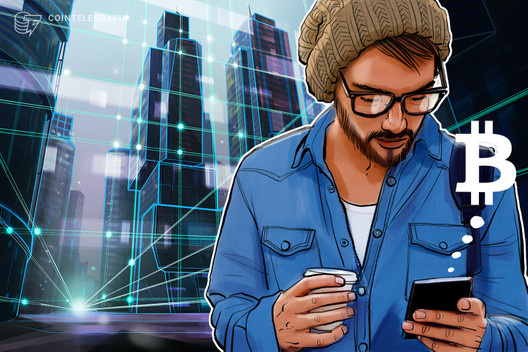 Bitcoin may not break $10,000 for some time as several metrics point to possible pullbacks to under $9,000.

Looking at performance relative to its peers, Ether (ETH) and XRP are both underperforming versus Bitcoin at the moment. Ether, the second-biggest cryptocurrency by market capitalization, being down 1.29% and XRP 1.22% in the last 24 hours. But both have outperformed Bitcoin this week with ETH up a notable 9% over the last seven days.

Bitcoin dominance remains at 65% and continues to lose ground following a strong couple of weeks for altcoins.

The weekly Bitcoin chart shows BTC/USD at the peak of its third attempt to push the price action back across the $10,000 handle after a period of lower lows.

Since August of 2019, $10,500 is the price point at which Bitcoin has been unable to close above on the weekly chart and it is generally a level Bitcoin has struggled to sustain.

The Moving Average Convergence Divergence indicator (MACD) is trending above zero and crossed bullish with higher highs printing on the histogram implying that there remains strength within the move.

Spot volume has been overwhelmingly in the green with 10 of the last 12 weeks printing bullish volume. 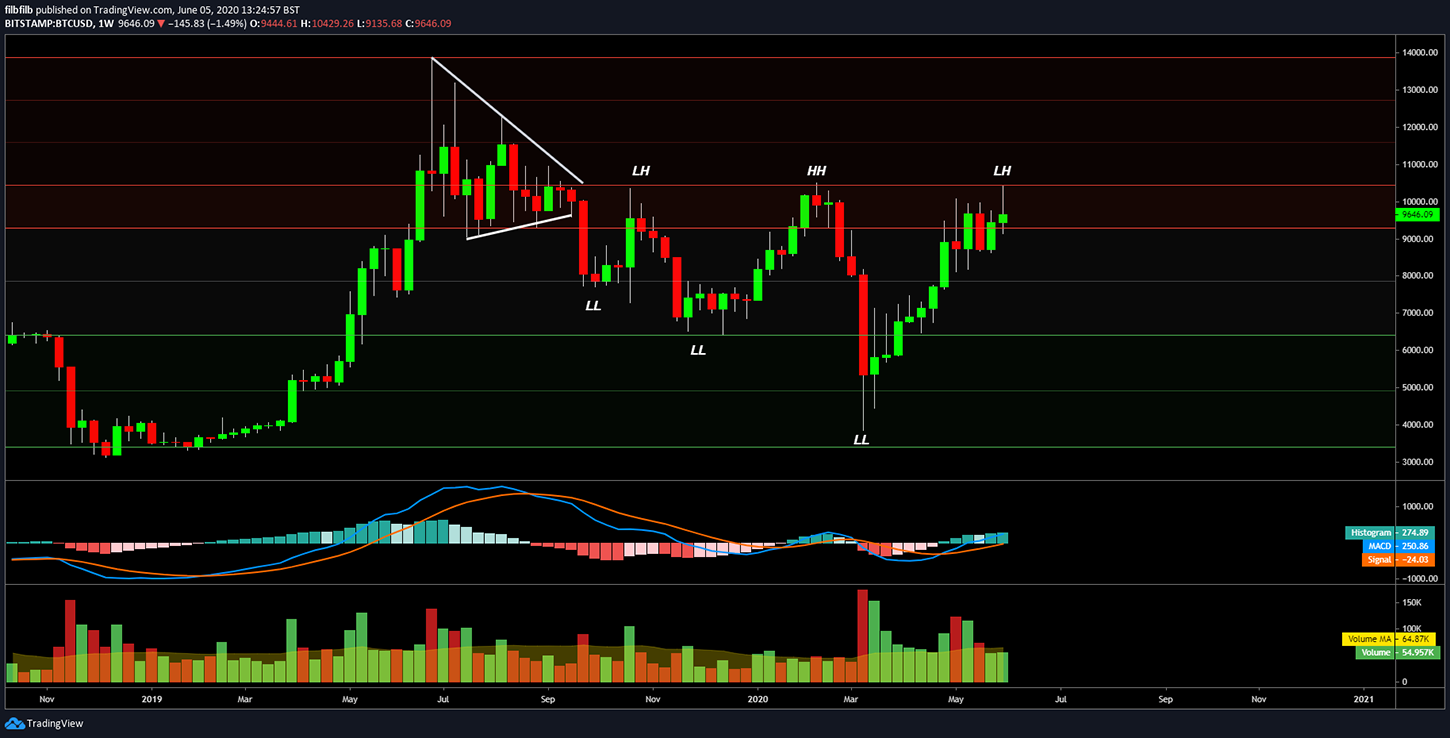 The VPVR indicator shows volume traded by price rather than by day and is useful to see which price levels attract the most interest in the market.

Volume has traded with a large bias below $9,700 since 2019 and little volume traded above this level, meaning Bitcoin is at the top of the trading range of interest. However, a break across this level means that there is little volume history and would likely lead to volatility.

Below $9,700 is the vast majority of price history meaning Bitcoin should find support if prices were to push lower.

High volume nodes are also visible around the $8,800 level and the $8,000 level, which are also where the 50 and 20-week moving averages are located. These would be areas buyers would be expected to step in should a breakdown occur. The yearly pivot also resides in the $8,100 area and has already acted as important support on the ascent to $10,000.

The 20-week moving average has often been a clear line in the sand between Bitcoin being in a bull and bear market, but should that fail there is the 100-WMA at $7,200 and the 200-WMA at $5,900, which are also both areas of strong price history.

Each of the key moving averages mentioned all have their price above and are trending to the upside, which is generally what would be expected for a market to be considered bullish. But the higher high on the weekly chart remains a miss for the bulls. 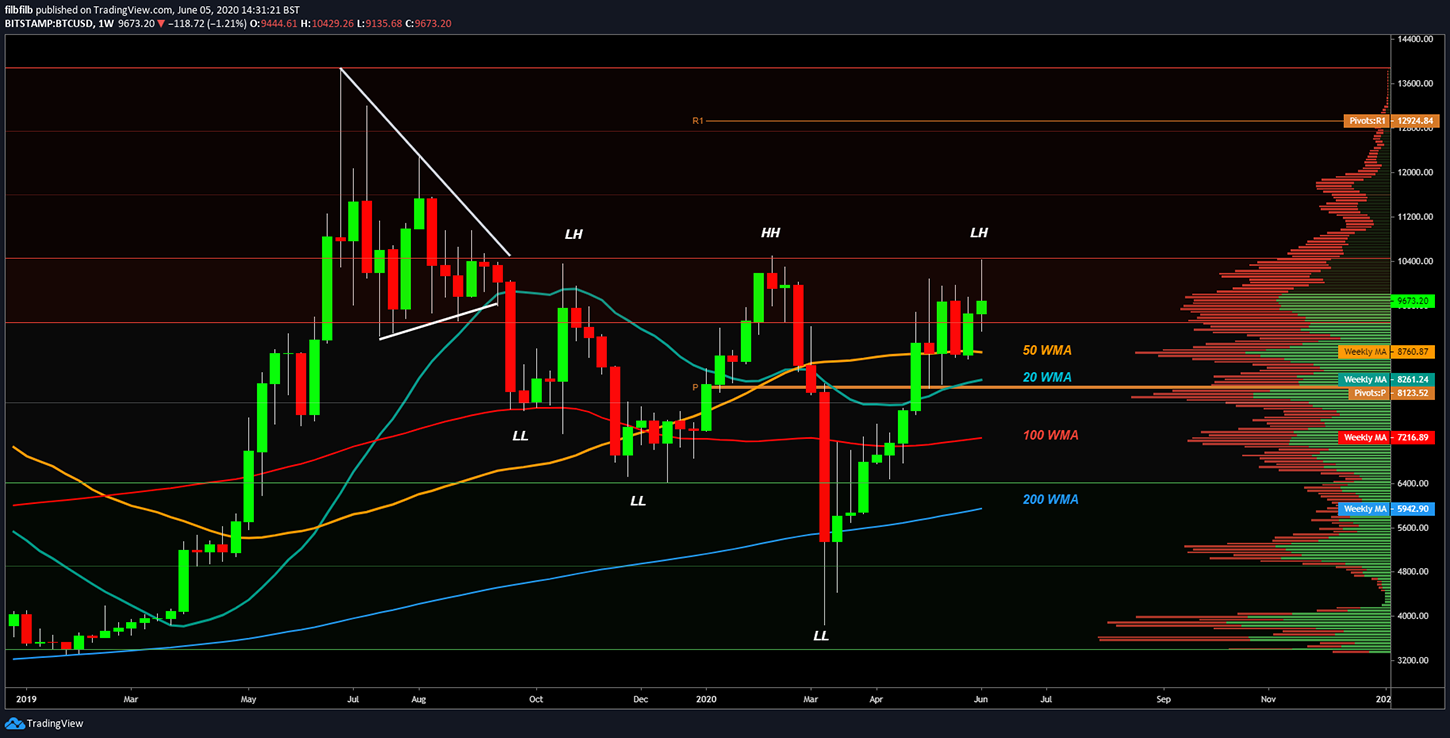 The 4-hour chart again shows Bitcoin above all of the key moving averages with a notable recent golden cross of the 50-DMA above both the 100 and 200-DMA.

Price action has been trapped within a large symmetrical triangle, which is generally considered bullish and has a measured move target of $12,000 as decided by the width of the triangle.

The price is also showing a false breakout and rejection at the key $10,400 level, which Bitcoin has struggled with in the past three quarterly periods. Traders need close and reclaim above this level and form a higher high before the chart can be in the clear for the bulls. 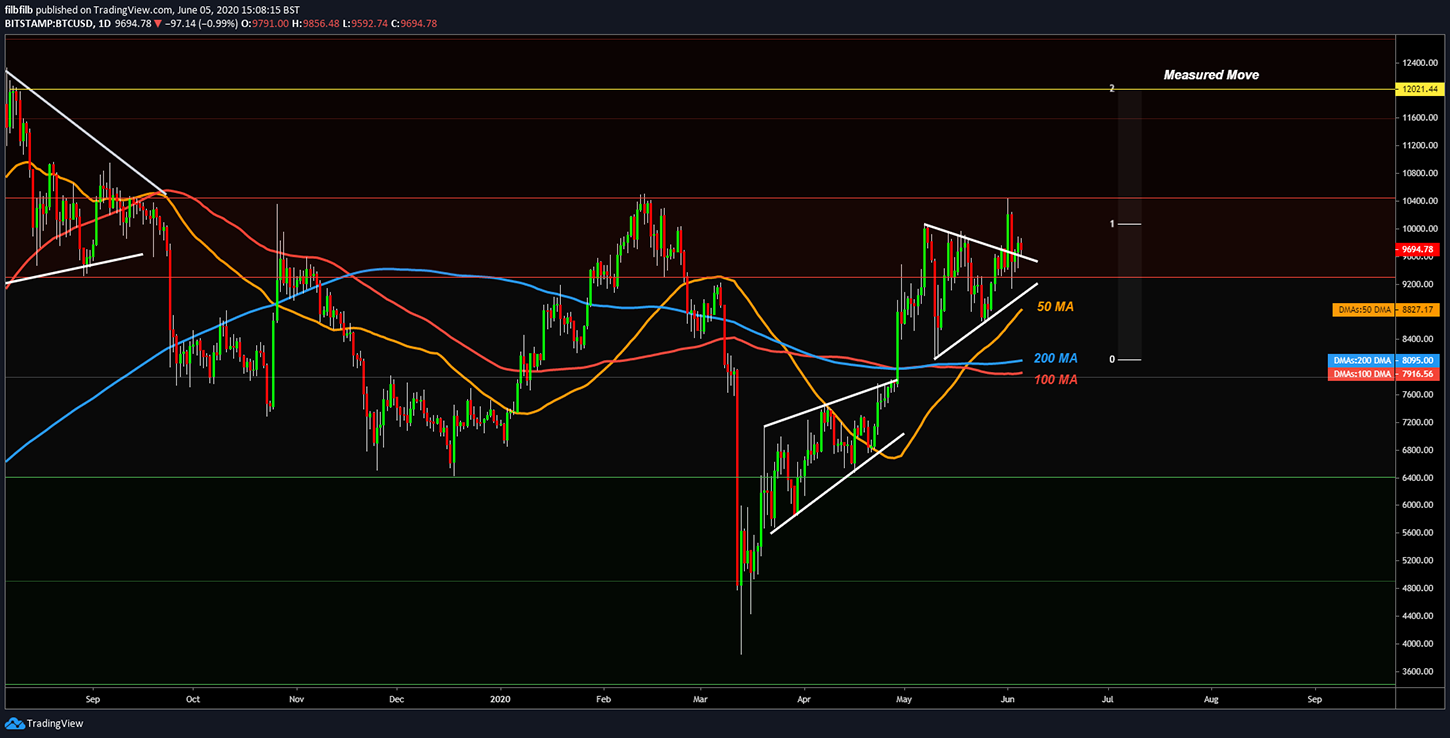 The 1-day chart is showing the MACD momentum being marginally bullish, trending above zero but overall lacking momentum. Volume has generally been below average, with higher volume bars lately being predominantly bearish.

Low volume can be expected in a period of consolidation as seen when BTC worked towards the breakout above $8,000. However, the consistent buying volume led to a breakout in the OBV, a volume indicator that adds or subtracts daily volume based on price movement and therefore, emphasizes the effect volume has upon price.

OBV presently remains flat and has not broken out of sideways consolidation. Volume generally tends to lead price and there is not evidence of a breakout either way on the daily timeframe. 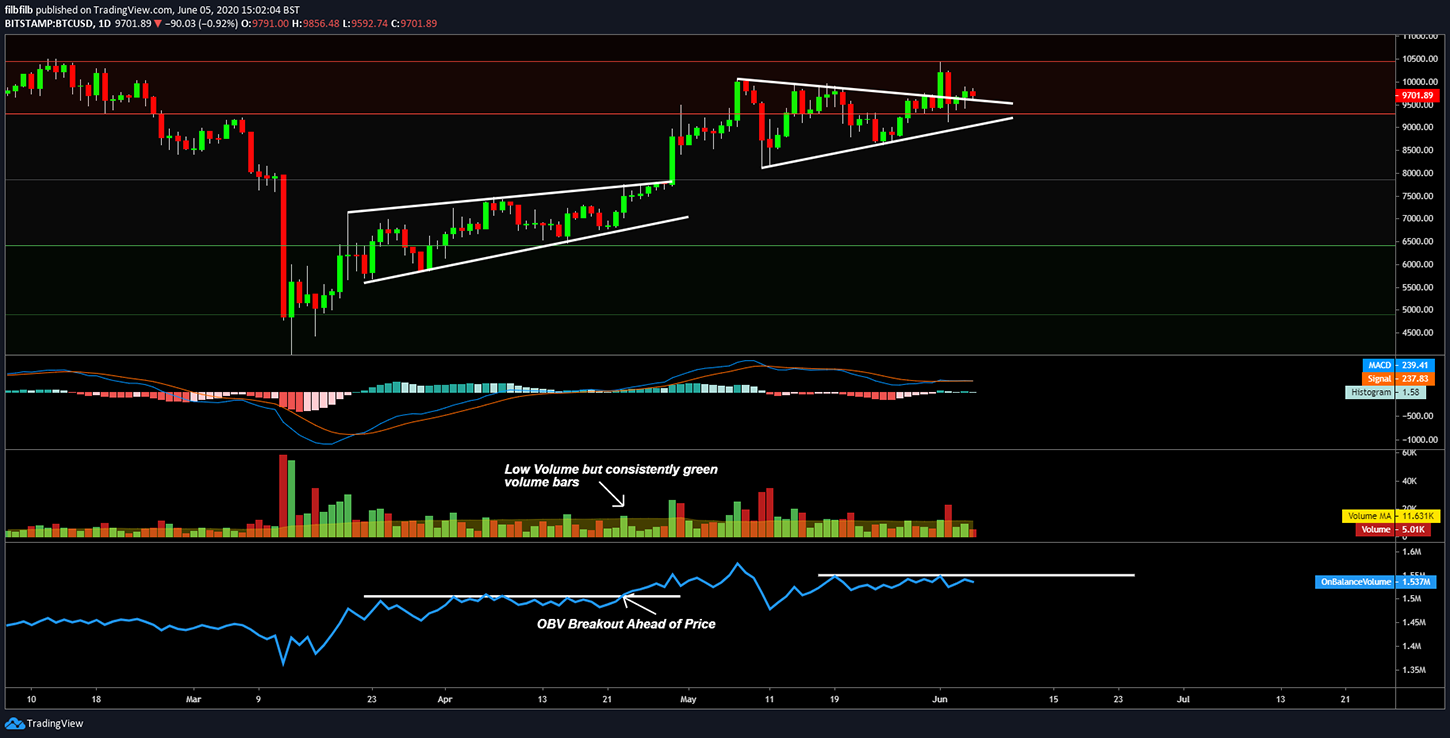 The 4-hour chart also shows Bitcoin is being supported by the 50-MA and is attempting to break but also finding support on the triangle apex. This is the second meaningful breakout from the triangle and sustaining price outside and above $9,600 would be positive for the bulls. 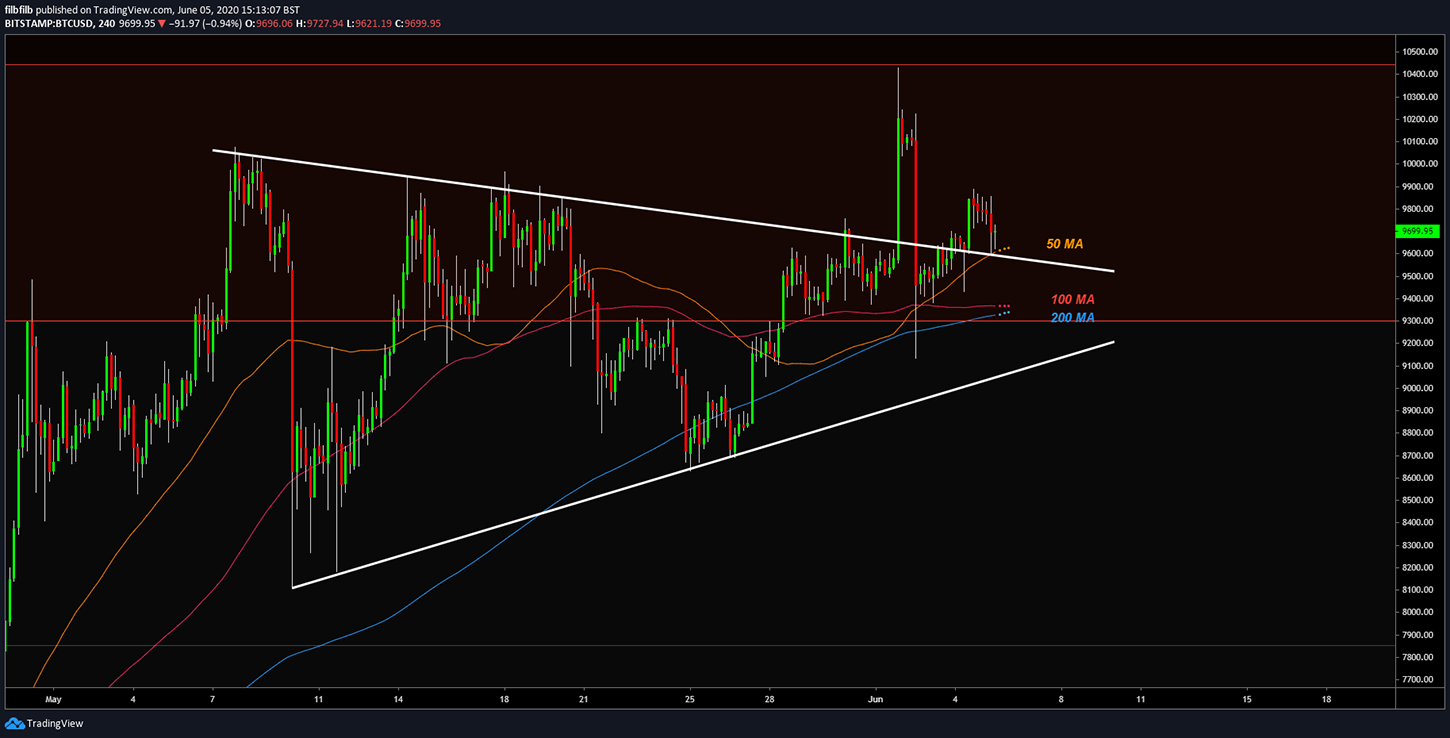 The MACD looks to be rolling over on the 4-hour chart with a bearish cross after consecutive red volume bars, which also show a clear breakdown in the OBV.

There is also a clear divergence between the OBV and price, with BTC pushing higher. But the OBV moving lower meaning that the bulls are perhaps not supported by the volume needed to sustain the move. 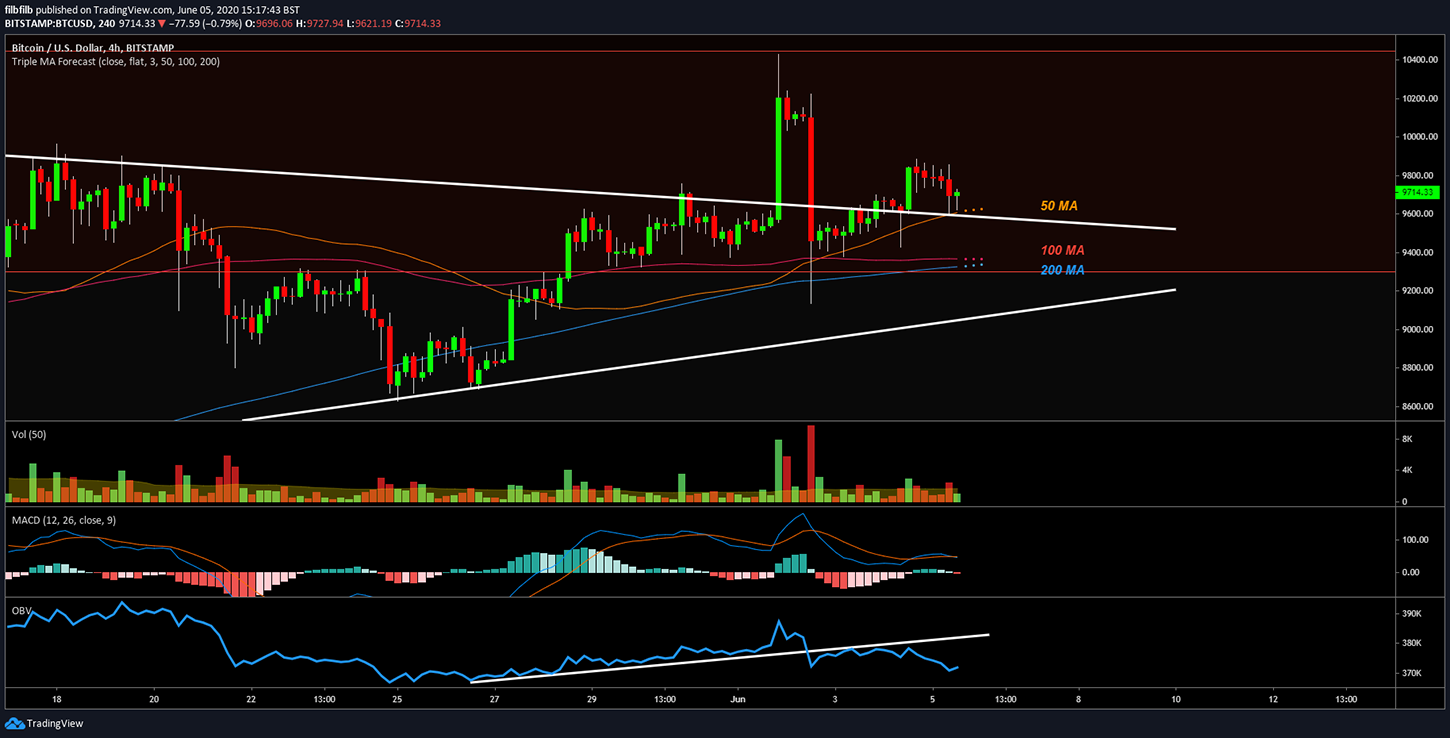 The CME futures chart shows a slightly different chart to that of the Bitcoin chart with a very clear divergence between volume and price. Volume is clearly favoring the bears as demonstrated by the above-average red volume bars and also the divergence on the OBV, which is clearly moving lower. 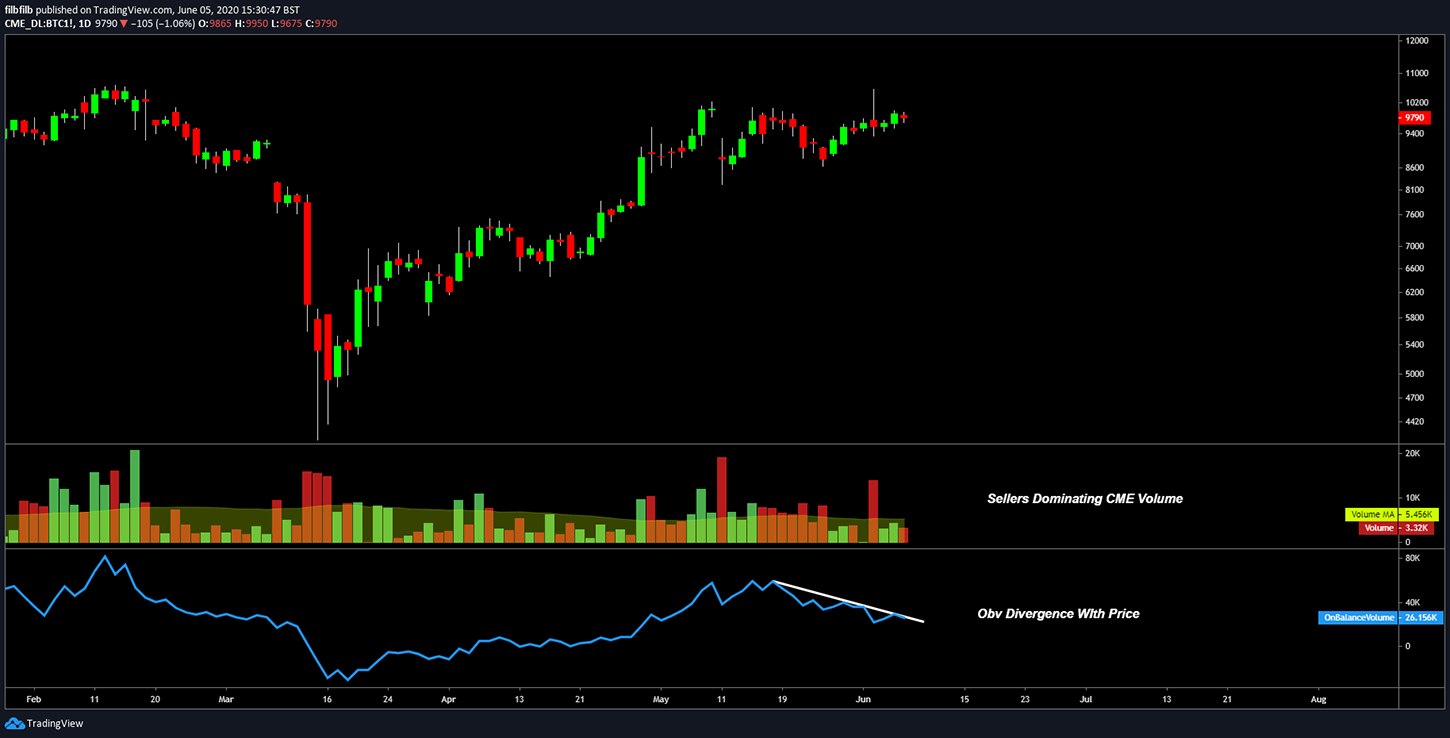 Futures prices for Bitcoin are carrying around a 0.5% premium for the end of July and there is not an expectation of breaking $10,000 before the end of the year.

This is generally not a bad sign as there is not any overly bullish sentiment as prices are moving higher, though this has proved to be a bearish sign in the past. 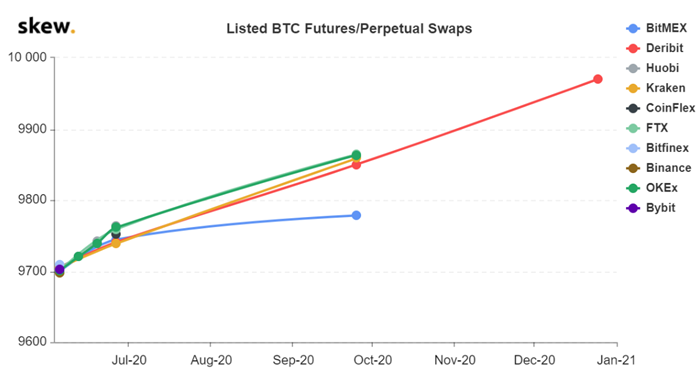 Perpetual swap funding is showing to be low at around 0.01% per session and is generally trending up on average. However, it is clearly below the higher levels, implying the market is overleveraged to the bullish side.

Generally speaking, there is an inverse relationship between funding rates and the following price direction. 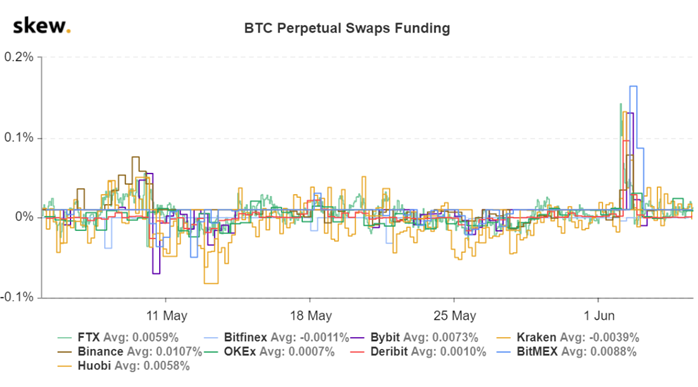 The price of Bitcoin remains in a state of being bullish at resistance but has failed to find the volume to break above the key resistance of $10,500. Volume confirmation and support at $10,500 should see Bitcoin move into an area where volatility will pick up and bulls will then set $12,000 as their next target.

However, the volume does appear to be controlled by the bears around the $10,000 level, and the current bullish responses have not been sufficient enough to break out of the OBV.

Bitcoin price price may need to go lower to find more consistent bullish buying interest, with the 20-week moving average and the pivot around the $8,100 area likely to play an important role in determining the price over the next six months.

The views and opinions expressed here are solely those of the author and do not necessarily reflect the views of Cointelegraph. Every investment and trading move involves risk. You should conduct your own research when making a decision.